UPDATED with trailer description and Official Logo! Joss Whedon Reveals That THE AVENGERS 2 Will Be Titled... 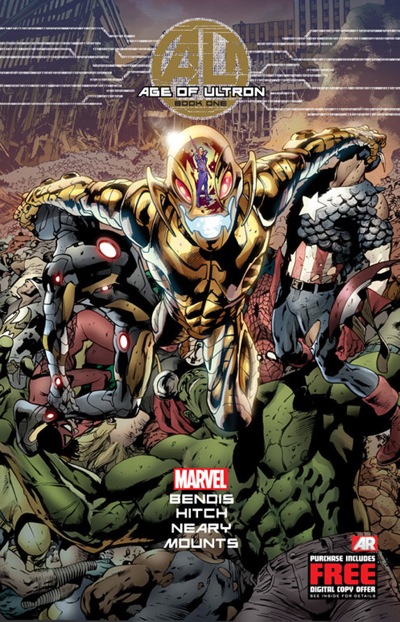 Beaks here with big news coming out of San Diego Comic Con. Joss Whedon just took the Hall H stage to announce that the second Avengers film will be based on Brian Michael Bendis's AGE OF ULTRON. Suddenly, Marvel's plan is beginning to come into very clear focus. Given Henry Pym's involvement in this story, Edgar Wright's ANT-MAN doesn't seem like a one-off anymore, does it?

Ahoy, squirts! Quint here. Holy shit, my ears are still ringing from the screaming Marvel fans in Hall H, including 2 particularly shrill girls sitting behind me.

I'm adding onto this story, so you know the big news... AVENGERS: AGE OF ULTRON will be the big Avengers sequel. Here's how it was revealed:

After Guardians of the Galaxy's panel (which was great, report coming up soon, I promise) Kevin Feige stands up to leave and just as he gets to the end of the stage, he doubles back and introduces Joss Whedon. Crowd goes nuts, Joss waves and says “I don't have anything to say, but I have one thing to add.” The lights go down and we hear the Avengers theme.

Iron Man's helmet appears, audience cheers. Sound clips from all the Marvel movies start playing. “I am Iron Man,” “I'm always angry,”etc. I don't remember all of them, but they build to the end of the Avengers where Sam Jackson says they'll be back when they are needed.

All the while the camera sweeps in close to the Iron Man helmet. It's getting crunched, dented, misshapen. Sparks fly, crunching noises are heard. When we get that final Avengers quote the camera pulls back and the Iron Man helmet has been reforged as Ultron's helmet, an angry red light glowing out of his mouth and eye holes. Cue my eardrums being punctured by screaming fangirls (and boys, I'll be fair).

There you go. One of the best Holy Shit moments of Comic-Con 2013.

Back with more tonight. I'll be doing detailed wrap ups of all the crazy shit I saw today, probably way into the wee hours of the morning. Stay tuned!