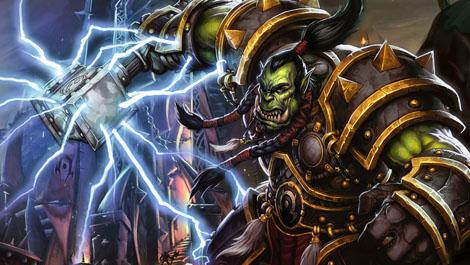 Ahoy, squirts! Quint here. They just surprised everybody in Hall H with a “tone piece” for Warcraft! They didn't introduce it other than Chris Hardwricke (moderator duties, you know) pretending to get a call from Thomas Tull saying to roll something.

Footage started in a desert environment. Slow build, seeing the desolation. The only hint of a sci-fi element is a green light in a circling cloud mass. We see a rugged man standing alone, takes a last drink of water, then pulls a big blade from his back. He's dressed almost like Mad Max except for the sword, which has a dragon's head overlapping the blade and the handle.

He looks around and sees a long dead soldier, just bones in armor. The man sees something, approaches and pulls a shield with a lions head on it from the dusty earth, hefts its weight and then slams his sword into it, like he's ringing a bell.

Something approaches, the camera pulls back and we're over the green shoulder of an Orc. In one take we see the orc in silhouette from the back and when we get to his right side a giant hammer raises into view and we get a gunslinger shot of the hammer kind of framing the rugged dude with the sword in the distance.

They charge each other, the man raising his sword, the Orc raising his hammer. The Orc brings it down first and we get a POV shot of the Orc jumping up and bring the hammer down right on us.

Footage looked really cool. I haven't played Warcraft, which is why you see anything from me on the site at all... I tend to get lost in RPGs, God only knows how long I'd wander in an MMORPG...

Duncan Jones came out afterwards, said he was a massive fan (I can attest to this) and is so crazy excited to be doing this. He also said they start filming in early 2014. If my math adds up that makes it possible 2015 just got even nerdier.