Ahoy, squirts! Quint here. I totally lucked out. Today was one of those days where you love your job. Even with the pressures and stress of Comic-Con breathing down my neck, I can't help but walk around with a smile because I got to sit down with Harrison Ford today. Childhood dream come true.

I've been lucky enough to meet Mr. Ford a few times over the years and we've had brief, informal chats, but this was the first time I got to sit down and really shoot some questions at him. We focus on his role as Graff in Ender's Game, but by now you should know I'm borderline obsessed with Temple of Doom, so naturally that came up and I couldn't let the opportunity pass without asking about his return as Han Solo.

I found Ford to be very gracious and present, which was a happy surprise. He seemed to be really invested in Ender's Game and proud of his work... in other words, he wasn't counting the minutes until his interview obligations were over... or if he was, he was doing a great job at hiding it!

So here you go. My sit down with Harrison Ford. Holy shit, I just typed those words... geek mind blown! 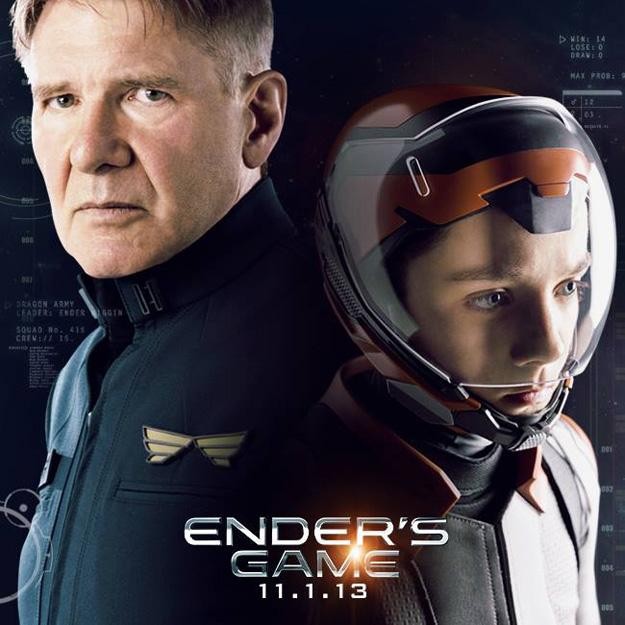 Quint: When I visited the set I talked a little bit with Gavin Hood and he said one of his favorite aspects of the story was Ender's relationship with Graff. That's one of my favorite things about the book as well. It's fascinating because it seems like the relationship between the two are evolving constantly, but they're always evolving away from each other. Graff starts off cold when Ender needs somebody warm and then he starts warming up as Ender is growing colder.

Harrison Ford: Clearly Graff is charged with manipulating Ender. In some cases he does it coldly and deliberately for the good of all mankind and sometimes he's troubled by it. I think the complexity of that relationship is what attracted me to the story and the moral complexity of the situation that he finds himself in. Ender doesn't really recognize it as a moral conundrum until the very end of the movie, but Graff knows it all the way through.

Quint: Does the fact that Graff thinks he's doing this for the greater good give you something to latch on to as an actor, to not just make him a one-dimensional character?

Harrison Ford: I think he knows he's doing it for the greater good. He knows what he's doing and he's not confused about it at all. It causes some emotional struggle for him, but he sticks with the purpose which he's been assigned.

Quint: From the little bit I saw on the set, you seemed to be doing your best to layer the character, not just make him stern and cold. The day I was there was when you gave Ender Dragon Army and I noticed you gave some takes that were straight up serious and some that had a bit of levity to it.

Harrison Ford: I'm also trying to provide the director with options in the cutting room. Not for big changes, but options for the uniformity. If a certain scene had to be left out for time purposes or something, he would have options, which would allow elements of character to be expressed in that scene. You're always thinking about it. I think that's what my job is, to give them material for the cutting room.

Quint: Speaking of Gavin, you've worked with some amazing directors... Spielberg, of course, Polanski, Weir... how does Gavin measure up? What does he bring to the table?

Harrison Ford: I think he's wonderfully talented visually. I think the movie looks amazing. I had a wonderful time working on it. He was a delight, he was charming and helpful and he was wonderful with the kids.

Quint: In my limited time seeing him work he seemed to be full of energy and was obviously very passionate about the source material and didn't want to be the guy to mess it up.

Harrison Ford: I think we all felt that we had a wonderful opportunity and we wanted to take full advantage of it.

Quint: Can we talk a little bit about working with the kids? Asa (Butterfield) is incredible... if you've seen Hugo you know that, but it seems that he's maturing even more with his work here.

Harrison Ford: He is. He's quite amazing. He works hard, terribly hard. He's enormously well-prepared, thoughtful and wise beyond his years... and beyond his ears. (laughs) He was a real pleasure to work with. He's very sincere about everything he did... and I mean that in a nice way. He not unsophisticated, he's just very sincere.

Quint: I only talked with him for a few minutes, but he came across as someone who wears his heart on his sleeve. He didn't seem like he was putting up any barriers, if you know what I mean.

Harrison Ford: He's there. That's a wonderful thing to find when you're acting with somebody... that they actually fucking show up.

Quint: You've worked with kids throughout your entire career. Do you approach that differently than you would adult actors or do you take it on an individual basis?

Harrison Ford: I think in each case it's different. I think because I represented authority and we present a military environment and relationship I did not become too familiar with the kids. I love kids and I love being around them and I like to get goofy as much as the next guy, but I didn't do that in this case. I wanted them to have a degree of question in their minds about what I was thinking and who I was.

Quint: Would you do that with an adult actor or was it an approach to help their performance?

Harrison Ford: Gavin and I chatted about that at a certain point. Both of us thought it would be useful. With adult actors your relationship you have depends on a lot of different kinds of circumstances, but in this case we wanted to take advantage of what Gavin felt was already there in their minds...

Quint: There was no point in complicating it.

Harrison Ford: Yeah, don't complicate it at all.

Quint: Now, you can probably count on two hands the film actors who have been asked to return to characters decades after the last film. You've already done that with Indiana Jones and you're coming back to play Han Solo. How do you approach that as an actor? Is there a grace period of rediscovering the character that you portrayed years before or is it like any other role and you let the script dictate the approach?

Harrison Ford: I think you have to enforce your personal ambition to bring something more complicated to the audience, some degree of development of the character. That's the fun of it when you've been away from a character for a period of time, to bring a new understanding or complexity to the character for the audience.

Quint: Because otherwise you're just showing them what they've seen before.

Quint: I think that's why I love Temple of Doom so much. You get to play a different Indiana Jones. 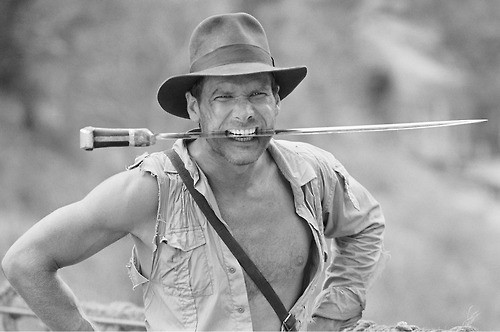 Harrison Ford: That's the kind of thing you always hope you can do and one of the things I spoke a lot to George and Steven about.

Quint: What about Han? Do you think you're going to able to bring that attitude if you return to Star Wars?

Harrison Ford: I'm not prepared to talk about it at this point.

Quint: No worries. Not trying to push for information...

Harrison Ford: No, no... It's not a wrong question, it'd just be wrong to answer at this point.

Quint: Thanks for your time, man. I really appreciate it.

Harrison Ford: Thank you very much. 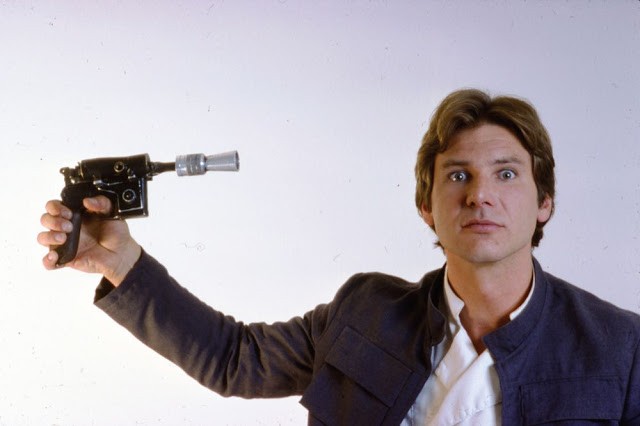 Well, I tried to pry some Han Solo information out of him! I don't know how it comes across in print, but his refusal to talk about it was handled very graciously and there were no rolling eyes, so I'll take it as a win.

Hope you enjoyed the chat!