Ahoy, squirts! Quint here. Usually Comic-Con starts on Wednesday with Preview Night. I remember coming to San Diego in 2000, the year of X-Men, and back then the con started for real on Thursday and preview night was what it sounds like... an early glimpse at the Con floor to check out the big movie and comic booths, do some shopping and get a lay of the land. Back in those days, you could walk the floor freely, without the crowds, and it was a nice lead in to the stressful, but geeky cool fun of the Con. Now, preview night is just another day of the convention, with TV pilots and season premieres screening in the evening and the floor just as crowded as any other day of the convention.

In related news, who are these kids and why are they always on my lawn?

It was only a matter of time before someone started pushing their cool shit further down in the week and that someone was Legendary who gathered together a small group of nerdy writers to check out their Godzilla Encounter Tuesday evening.

They went all out. It started with a pick up from the airport in large black SUVs with this curious logo on the doors.

Once inside the SUVs we began the short drive into San Diego and the radio was all static. After a minute or two the static was broken up with short snippets of radio chatter about some event on the coast and how San Diego was under attack.

We pulled up to the location of the Encounter which had armed military guys looking super serious at posts around the doors of this warehouse in an undisclosed location within the Gaslamp District.

Inside the doors you immediately are presented with an upside down police car, lights still going off, in a pile of rubble. 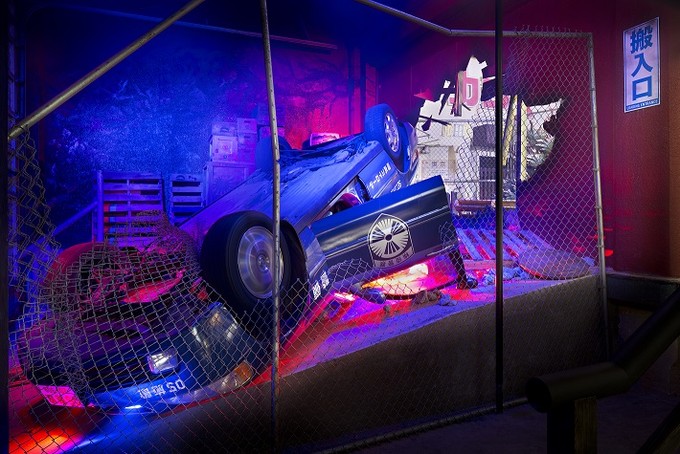 The interior was both a recreation of a little bit of Tokyo, including a Ramen bar (with a bit of an easter egg for Godzilla fans hidden in the name “Shindo's Ramen Bar”), and a semi-museum lovingly devoted to Godzilla as a pop culture icon.

This included props like the Oxygen Destroyer bomb from the original 1954 Gojira and one of the Toho suits used in one of the films. 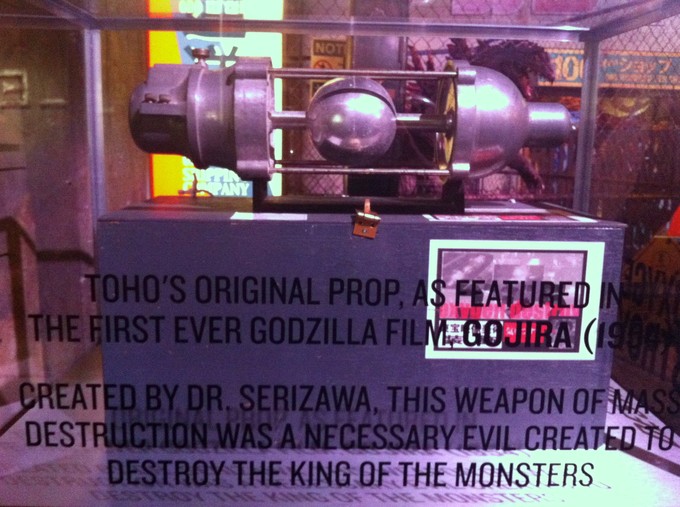 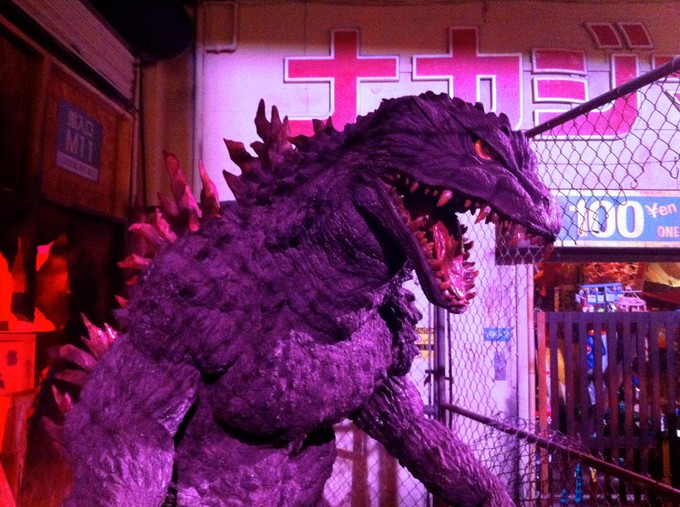 Shindo's Ramen Bar was actually serving ramen with a couple of actors reading Tokyo newspapers and sipping away at beer like it's just another day. These guys only ever spoke Japanese to us, by the way, trying to let us know where to throw away our little paper plates with rice and/or sushi when we were finished. 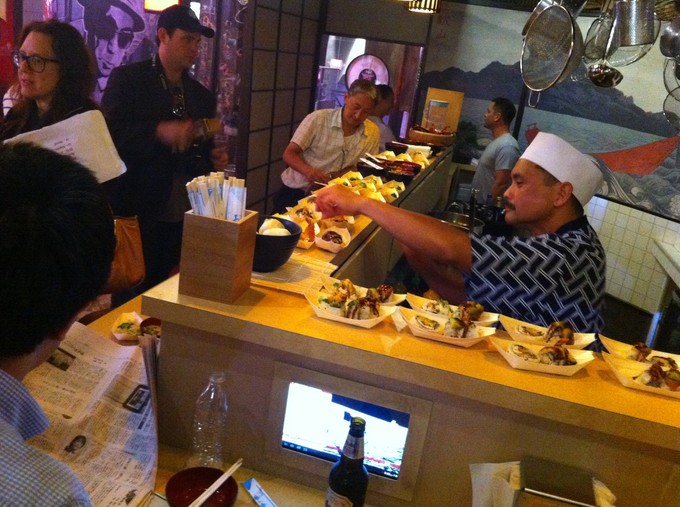 One of the neater bits was a bank of TVs that alternated between static and clips of classic Godzilla movies. We were told each TV is from the year of whatever Godzilla film it's featuring. 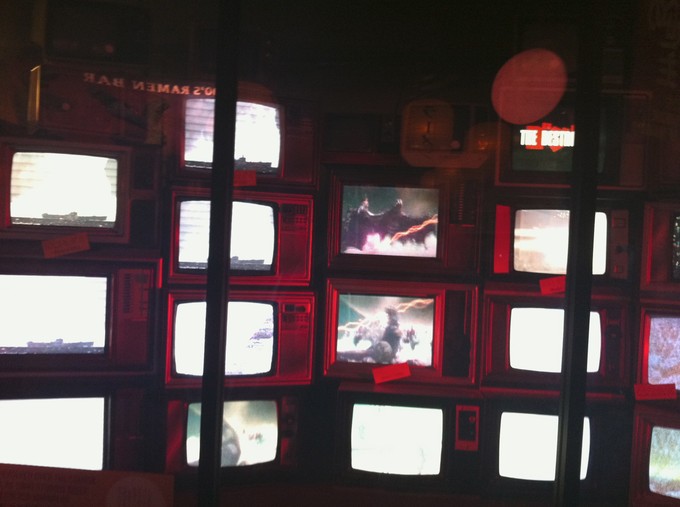 There were all sorts of store fronts advertising Godzilla merch from years past, but the biggest was the Manga store that had a giant drawing of Godzilla using his Atomic Breath as the centerpiece to the store. 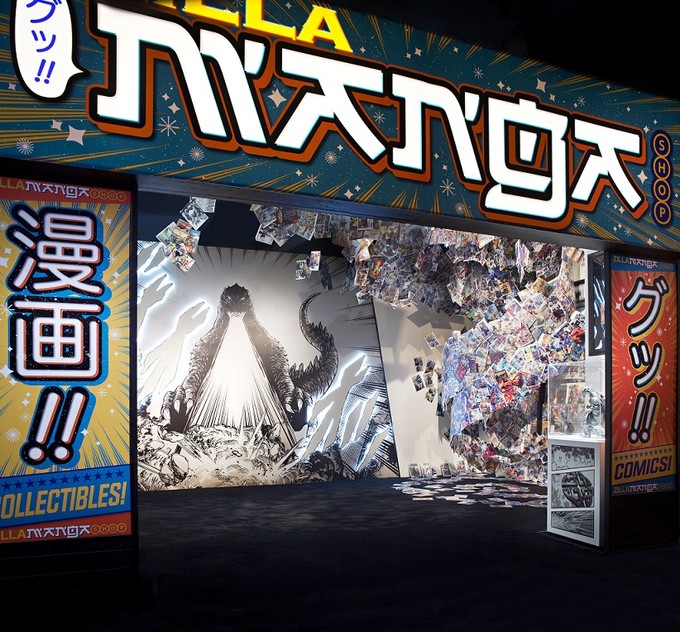 The walls were lined with displays of Godzilla toys and sculptures. Like I said, this place was designed to be a love-letter to the character with easter eggs hidden all over the place. The detail was incredible and I feel like I missed half of it even though I was in there for a solid 20 minutes. Here's one of my favorite things I spotted, though: 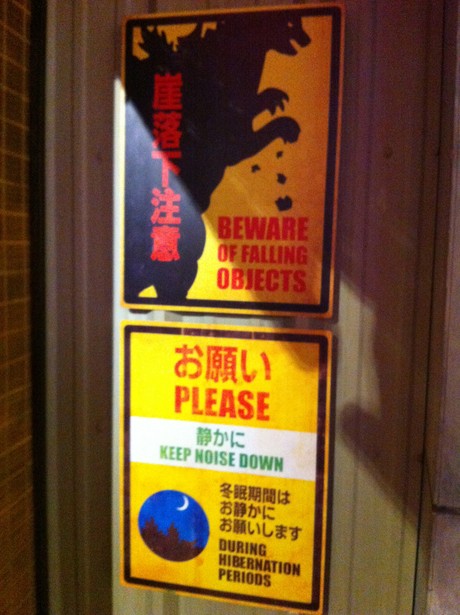 At a certain point alarms started going off and I was ushered out of “Tokyo” and into a command center type room with TVs on news stations interviewing disaster survivor types and a giant map of the word with San Diego highlighted by a big red dot. We were wanded by people in radioactive suits and sent up to the top floor of this place for the final showpiece... 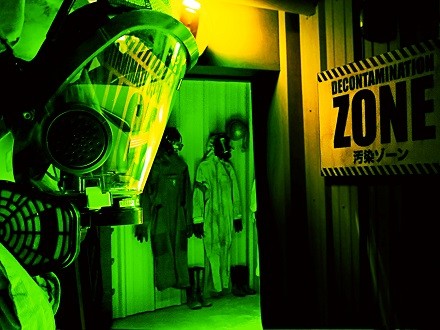 The elevator was simply a room that looked like an elevator, of course, and when the doors opened we were on the top floor of an office building. Blinds hung half open against the windows showing a nighttime cityscape. Rain peppered the windows and suddenly the room started vibrating Jurassic park style. As you can guess, Big Green was on the approach and sure enough he walked through the city, bellowing his distinctive roar. He passed out of site only to return super close, his back plating popping up into view just before his head rises up right outside the windows. With a pissed off look in his eyes he roars at us, the sound system shaking the building and then he leaves and so do we, ending up back on the streets of San Diego.

The whole thing was really damn cool. It had a theme park vibe to it which I really dug. Lots of inventive imagineering to give the illusion of having a real experience with a big CG monster. Little touches impressed me, like the real water on the glass in front of the monitors showing the rainy night as Godzilla approached.

You can definitely feel the studio is putting their full weight behind Godzilla, trying to show Comic-Con fans they haven't forgotten his roots while at the same time reintroducing him as a cultural icon. They could have easily done the big event stuff (Godzilla appearing) by itself, but they took a great deal of time and effort with the Tokyo part of this display that shows the top brass are fans.

Oh, I guess I should talk a little about Godzilla himself, shouldn't I? That might be important...

The design of the King of Monsters was very much Godzilla. Back plates, short snout, etc. The dimensions were such that you could imagine a guy wearing a suit, which is pretty sweet. Godzilla's body type is a big part of the icon so it's good to see they kept that.

The picture Deadline snapped at this event was of Godzilla's eyes as he stares in at us. I haven't heard anything, but if I were a betting man I'd wager there'll be a big official image of the monster soon enough. I'm sure there'll be something at the big WB/Legendary panel Saturday and I'd be shocked if they didn't blast out something official in time with that.

If you're at Comic-Con and want to experience this thing yourself (and you should) you can keep an eye on the Godzilla Encounter site and/or head to the WB/Legendary booth (#3920) for more information.

With that, preview night is still many hours away, but Comic-Con has already begun. Stay tuned for the insanity of the next four days. Plenty of news and craziness in store.