Ready for the Austin screening of PACIFIC RIM?!?!? Damn straight you are!!!

Why is it that PACIFIC RIM is such a pure unadulterated joygasm that has some folks giddy beyond words to see it?  For me, I grew up with Godzilla movies in release.  My favorite film, KING KONG (1933) actually has my very first memory attached to it - due to my parents having the film in 16mm in those pre-Video days of yore.    Then Bill Watterson's CALVIN & HOBBES came on the scene and it reenacted my childhood for me.   My Hobbes was a weiner dog named Dr. Demento - and he and I had many adventures and savage battles.   But when I saw this panel, I knew...   Bill Watterson understood me: 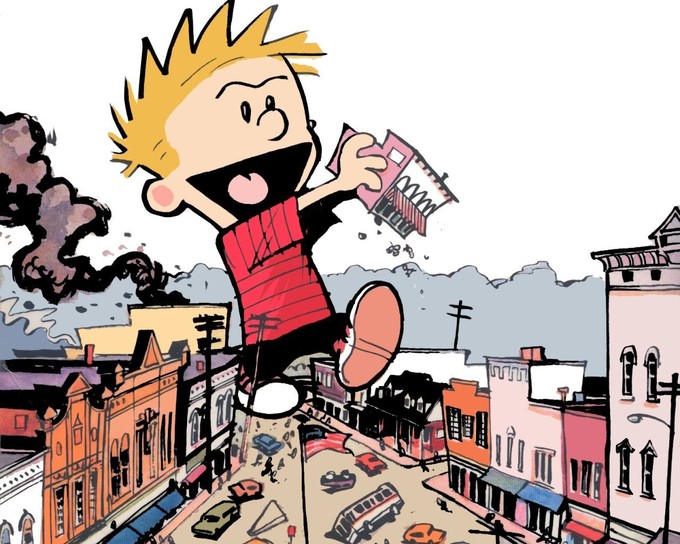 Remember the joy of stomping tin cans and paper cups and turning cardboard boxes into multi-story buildings?  Maybe you stomped a mound of ants and got those tiny blisters on your feet where the pathetic "ants" bit their last bite upon your hide only to be squished between your fingers.

It didn't help any that my parents owned a full body foam rubber GODZILLA costume and had a friend go all over town winning costume contests on Halloween - including strip clubs.   So yeah...   They stuck with me.   By the time the Shogun Warriors hit and came out with GODZILLA & RODAN toys for the giant robots to fight...  well I had them pitted - and the Rancor Monster joined them - and the Imperial Walkers and Chicken Walkers joined the fight too.

For a lot of us - this joy of wanton destruction and mayhem changed on 9/11.   When buildings crashing down seemed to change a tenor of fantasy.   But the entire Kaiju Genre came from the U.S. dropping two Atomic Bombs on Japan in WWII - and there was a strange psychic healing that these movies gave them.   That society could survive the unimaginable.   That we human beings could weather any storm.   And it is that spirit, that Guillermo has brought to the making of PACIFIC RIM.

Now this screening is being brought to you by AICN and ODD CITY ENTERTAINMENT, which won a contract to produce amazing posters for the film.  When Roman asked if I'd be down with doing an event in conjunction with one of their poster drops - I said "YES," faster than he could ask the question.  But then asked if LEGENDARY and WARNER BROTHERS were down for it.  He assured they were - and then IMAX jumped on board.  This screening will be taking place this Sunday, July 7th at 7:30pm at the Regal Gateway IMAX here in Austin, Tx!

How do you get in?

This is simple - Demonstrate your love for Kaiju or Mechs or Giant Robots or plain ol awesome Giant Monsters.   If you want your family to come - demonstrate a family love of imagining being a giant monster.  Build a dirt castle and destroy it.   Make a quick Cardboard box destruction course and destroy.   Tap into you wanton crazed beast inside of you...  let it out...   OR - just write a bit about your hopes for PACIFIC RIM...   I can't wait to see this with y'all!!!

SCREENING IS FULL!!!  WINNERS HAVE BEEN EMAILED!  THERE WAS A VERY LARGE RESPONSE FOR THIS SCREENING AND A WHOLE LOT OF TALENTED AND PASSIONATE FOLKS CAN'T FIT IN THE THEATER!  BUMMER!  BUT FOR THOSE THAT WON, SWEET VICTORY!

Need more motivation?  My partner on this screening is ODD CITY ENTERTAINMENT and Roman Morales, they're going to be dropping the following prints after the screening for those interested.   If you take a look at this - you may wonder why we chose this print for this screening and it's because Ramon and I both want to emphasize the reality.   When I saw James Fosdike's print - and then read his quote from him about it, "When I saw the trailer, the image of the young girl on a deserted street watching jets fly over really struck a chord in me.  I was reminded of the films, cartoons and comics that I read and loved as a child.  I wanted to know what caused that street to be deserted, what the girl was in awe of, and where the jets were going.  Lucky for me I was able to find out and create my impression of what was in store!" - Well that sealed it!  That little girl, in many ways - she's the center of this film.   That moment.  Little girl on one end of a street and on the other end...  its ONIBABA (technically my favorite Kaiju name, even more so than Karloff right now)  That's not a giant robot, it's a little girl - I can't friggin wait!   So, if you want a chance at grabbing these sweet posters - get to emailing and playing along.   We're going to have a great time!  And here's the details on the posters:

The Poster that will be available after our screening is by James Fosdike. 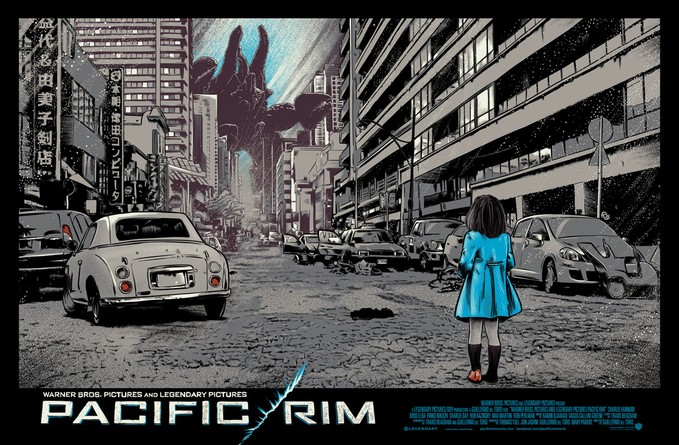 And here's the Variant: 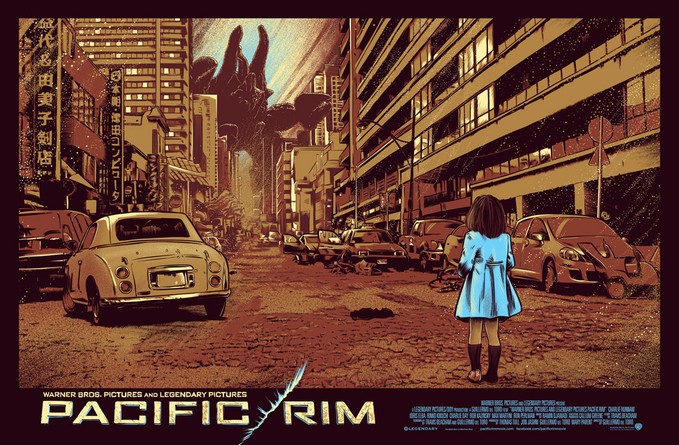 Lastly, here's a new featurette that came out today regarding the KAIJU - it should tune you up for stomping something small ferociously!

Ok - it is time to stop pre-geeking - and just see this thing. I've spent an inordinate amount of my night watching featurettes, trailers and seeking out tweets from folks that saw the movie tonight. Can't wait for everyone to see it!