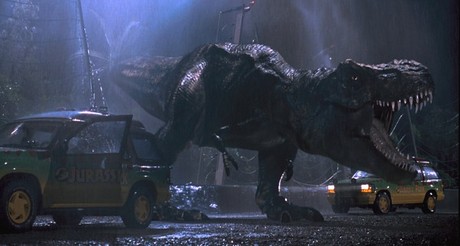 Some unconfirmed plot details have emerged on the upcoming Jurassic Park IV, thanks to the guys over at JoBlo.

The latest installment will see us revisiting Isla Nublar, but now, it houses a completed dinosaur theme park for the entire family. John Hammond's dreams have finally become a reality, catering to more than 10 million visitors every year. The park is said to have a Seaworld-like exhibit at the Isla Nublar Lagoon, which sets us up for seeing aquatic dinosaurs for the very first time (though we don't know exactly what kind).

Additionally, part of the park's drawing power (and possibly the answer to its safety concerns) include trained dinosaurs. Just like your favorite dolphin exhibits, the dinosaurs of Jurassic Park are now trained and perfectly safe...until they decide they've had enough.

Your old favorites are expected to return, but the main threat this time around isn't coming from the T-Rex or the Velociraptors. Instead, it will be from a new dinosaur we haven't seen in the films yet (unnamed, at this point). Though it should also be mentioned that the T-Rex and Velociraptors will be used to help fight this new threat, so they will likely still be providing the story with some action.

If we didn't learn our lesson that we can't control dinosaurs when were are only building the damn park, I can only imagine what kind of chaos ensues once we have a fully-functioning Dino Land with thousands of toursists lined up like a buffet. I kind of hope the guy who decided that you can "train" a dinosaur goes first.

Jurassic Park IV will be shot in 3D, and is expected out sometime in 2015.

I like that they're going a different direction than the other sequels, and the theme park gone arwy setting could offer a lot of fun opportunities for action pieces. According to the article, director Colin Trevorrow claims that he wants "people to feel like it's the last day of 6th grade again." If these script rumors are true, it sounds like he's off to a good start.