Here is some news to take with a grain of salt. According to WWE Examiner, the makers of TERMINATOR 5 are developing the film with a role for “Franchise Savior” Dwayne “The Rock” Johnson in mind. Honestly, reading the story made me feel like it was more fan casting than anything else but crazier things have happened. Oh, and that’s not the craziest thing that is reported.

According to their sources, one of the ideas they have for the sequel is to make it a prequel that involves Sarah Connor’s parents and would be the first time a Terminator was sent back in time. They continued by saying this:

Incredibly, Schwarzenegger may not play the role of a machine in the next film, but a potentially heroic human figure in or close to the Connor family. One theory is that Schwarzenegger's remarkable ability to protect the Connor family in the 1940s or 1950s with antiquated weaponry by today's standards ultimately inspired the machines to develop a terminator in his likeness that was eventually sent to 1984 when Sarah Connor was first targeted for termination.

Of course, this would contradict Schwarzenegger’s recent comments where he confirmed that he was indeed playing a Terminator. I would also think that they would already have the story locked down, considering they hired screenwriters six months ago and plan to be filming next January. It would be pretty surprising if they are still “throwing around” ideas as the article states. Would they really take a chance on a 40’s or 50’s setting for what is sure to be a summer blockbuster?

It’s possible though, Johnson has jumped aboard the JOURNEY, FAST AND FURIOUS, and G.I. JOE franchises and to have the chance to do battle with Schwarzenegger has to be appealing to him. Not to mention the chance to ultimately take over the TERMINATOR franchise. We will find out soon enough if there is any merit to this rumor so stay tuned. 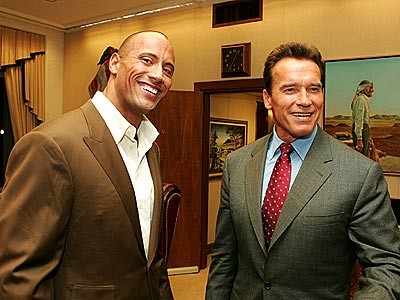