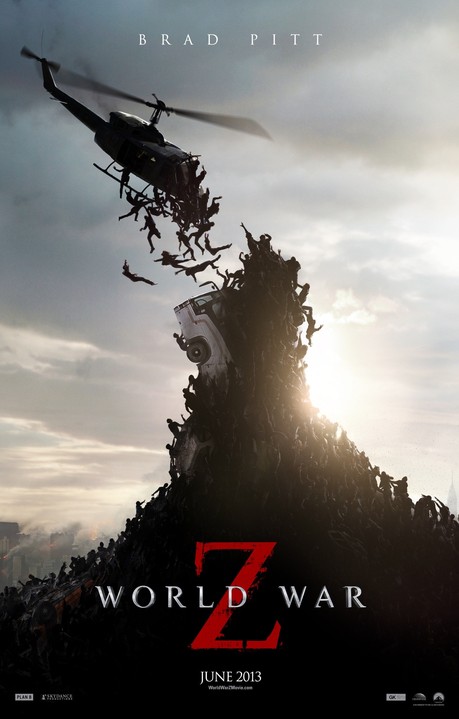 Max Brooks' novel was great, a dense, methodic and serious look at the realities of a real world zombie apocalypse. It would never, ever, ever, ever in a million years work as a movie, not without massive changes. As a long form TV series? Absolutely, but as a movie no way.

So I knew better than to bring the book into the movie with me. I'm not always that way, but in this particular case I could see from that very first read through that it would be a losing battle. What I wanted was for Brad Pitt's Plan B to convey the epic scope of the book, the diversity of the characters and make it its own thing.

I got some of that, but the whole didn't blow me away.

Focusing on the investigator character as the zombie apocalypse is still fresh is a storytelling choice I agree with. That adds a ticking clock element to the main character's quest that is absolutely cinematic and the right choice for a big budget end of the world zombie flick. The book is like a Ken Burns documentary on paper, with first-hand accounts detailing the war as the author seeks the origin of the virus. Here Patient Zero could hold the key to a vaccine that is really our only chance of surviving the rabid hordes that spread the virus.

It's a good choice that isn't followed through with, unfortunately. The plot is very muddy. The first act sets up Brad Pitt's Gerry Lane as a character and the threat of the zombies, who act in a very insect-like manner. They swarm, they move almost like there's a hive mind mentality that connects them and they're very, very aggressive. The second act is Pitt heading out to travel the world and find patient zero, but that's shortly thrown out the window and the interviews he conducts mean nothing. The infamously troubled third act is pretty good, but it's smaller and intimate, which is jarring when compared to the epic CG money shots of the rest of the movie.

I'm not sure who to blame for that. Is it the fault of the writers? The producers? Remember they scrapped the original ending and brought in Damon Lindelof and Drew Goddard to completely redo it. Is it Marc Forster's fault? I don't know all the behind the scenes scuttlebutt, but I can say that I don't think he did a great job here. The action is impossible to follow with all the shakeycam and outside of the last act I found it difficult to orient myself to the geography of the chaos if that makes any sense. I don't mind a filmmaker portraying the insanity of the situation visually, but without setting up an easy to grasp geography it comes across as sloppy filmmaking, not an artistic style.

It also has to be said that the PG-13 rating is distracting. I know genre geeks complaining about a horror film's PG-13 rating triggers an assumption that all they wanted was more gore because that's what horror is, right? Just blood and nastiness. That's not where I'm coming from here. There are big plot-centric moments that have to happen off screen, leaving only the score and character reactions to let the audience know what's going on. For instance, there's a sequence where Pitt's weapon is stuck in the head of a downed zombie when another notices him and is getting closer and closer while he struggles to get his weapon free.

Instead of finding an interesting way to convey this without gore, Forster shoots it just like a regular scene, which means it feels like they forgot the angle where we see the weapon stuck in the dead zombie's head. What that means is that it takes a little bit for the audience to figure out why this is suddenly a tense scene. We don't know that the weapon is stuck until a few beats in, which means it looks like Pitt's just standing there for no reason while the threat runs at him. This keeps the scene from being as tense as they wanted it to be.

There are many examples of that throughout that ended up pulling me out of the movie.

That brings us to the finale. Naturally I won't go into any details because I'm not a bastard, but I will say that of the entire movie the last act has the most pressing stakes and is the most focused. It's almost an island in and of itself, giving the movie a bit of an episodic TV feel despite them wanting to go hugely big with the event moments.

Of course after the Jerusalem and airplane sequences that are all over the trailers, I don't know how much bigger the movie could have been. But I'll take small and intimate if it works and this works. It's also the only time we get a real up close look at the Zeds. Suddenly we're reminded that the hordes of swarming dead were really people once. In this sequence we get to see their tics and traits, possibly echoes of their living personalities, possibly a result of the virus. Whatever it is it's good because it adds a hint of sadness to the horror and slows down the action so we can focus on Pitt and his incredibly crucial mission.

By the way, Brad Pitt is great in the lead. They smartly chose to not make him a superhero. He's just a guy that has a little experience in investigating hot zones. He's not a crack shot, he's not a trained soldier, he's not a brilliant psychologist, he doesn't possess a Sherlock Holmes type of deductive reasoning. He's a family man that's doing what he can to keep his family safe by contributing to the cause before the world is fully overrun.

Pitt conveys that perfectly and as a result he saves a good deal of the movie from being wholly generic studio stuff. That cuts both ways in hindsight, though. Pitt in this role in a Band of Brothers style mini-series that got to explore the book a bit more would have been all-time classic instead of an okay summer blockbuster.

And it isn't bad. This review has come off a lot more negative than I expected it to when I sat down to write it. It's not like I was angry at the movie when watching it. I'm behind a lot of the creative foundation of this adaptation. Hell, it could have been a whole lot worse than just a bit neutered and unfocused, but looking back I still want the better movie that could have been made with this material and cast.

So, I'm decidedly mixed. I liked more than I disliked, so I guess that puts me in the mixed-positive camp on this one.