Hey Comicphiles! Optimous Douche here. I’ve been loving the hell out of the surge of new titles coming from Titan Comics. CHRONOS COMMANDOS, NUMBERCRUNCHER and now DEATH SENTENCE are giving Image a real run for their money on the self-contained title market. I had a chance recently to speak with Monty Nero, writer of DEATH SENTENCE on why he picked such a morose topic and where we’ll see the G-Plus virus that imbues people with superpowers right before they shuffle lose their mortal coil head in the next few issues. 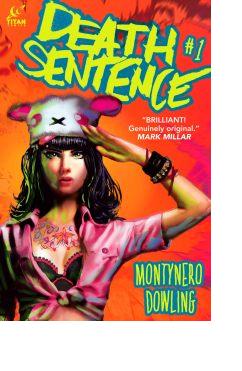 OPTIMOUS DOUCHE (OD): Let’s start with street cred, why should people know you (outside of DEATH SENTENCE)?

MONTY NERO (MN): No reason. I’ve done a couple of shorts for 2000ad, made a couple of computer games, and painted three covers for indie comics and Clint. Nothing anyone would notice.

OD: G-Plus, the virus that is contracted and acts like AIDS (and I don’t mean the 1970s dietary supplement), where did you come up with this super powered DEATH SENTENCE?

MN: It’s all stems from what you’d do with six months to live – what the point of your life is. All the characters want to do something amazing in the time they have left, and the virus enhances their ability to be creative. It’s got a realistic and contemporary tone, which is where the virus angle came from. It feels like real life in a way that other comic books don’t. It’s funny vibrant and entertaining, but there’s an air of foreboding too – an edge to it all.

OD: Issue one introduces us to three very different types of characters bound together by the G-Plus virus – two famous, one not so much, what was your thought behind using these three perspectives?

MN: Good comics are all about the resonances between what’s said and what’s seen. Between caption and images, but also between panels, between scenes, and between characters. When you’ve got three different perspectives on the same story, it’s powerful. There’s always some juxtaposition that makes the story more profound, or moving, or ironic – or all three. You’ve got to have someone to care about – that’s Verity. She’s a wannabe, stuck in a crap job with a fucked up life. She gets drunk and sleeps around to be somebody, to matter. She’s the beating heart of the story. So that means I can be more bold with Weasel – who’s amoral. He’s chaos and comedy. an artist with no credibility and Monty’s antagonistic. In a very real and entertaining way. It’s a modern approach – the opposite of decompression – but you end up with three times as much story and comedy and drama in each issue than you would do otherwise. People seem to dig it.

OD: So will these be our only three protagonists or will the world open up broader?

MN: Three’s more than enough. They meet amazing people and discover astounding things – but this series focuses intently on Verity, Weasel, and Monty. Through them we see the world of this story unfold.

OD: Let’s talk about the choices those three make with their last days to live. It looks like Verity won’t be able to live out her days as she pleases thanks to the power she”s been imbued with. Who else is in for a surprise?

MN: Everyone. Nothing goes as you or they expect. That’s our job – to keep you on your toes. Keep you guessing and excited. You have no idea where this ends up. Mike’s just drawing the last issue now – it’s off the scale. Ten times as epic as anything in issue one. 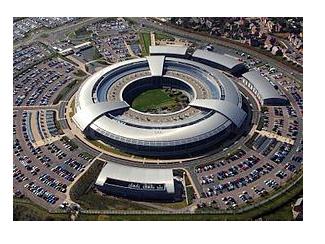 OD: Let’s witch to the antagonists for a minute. Issue one left the impression that time will be the chief antagonist in the story, but who are the tangible barbarians at the gate? It seems there are some clandestine black-ops forces at work.

MN: There’s a listening and surveillance agency called GCHQ. They’re very high tech and they have this awesome doughnut shaped building straight out of James Bond. It’s a real organisation and a real place. How could you not put that in a comic? Mike actually thought I was joking. I wrote ‘doughnut shaped HQ’ and sent him the link, but he though I was taking a piss. He drew a boring office block and had to redo it later. But why are GCHQ listening, that’s the question? Who are they feeding the information to – and why? It’s a pandemic emergency, a pressure situation. The traditional response is oppression, but nothing in Death Sentence is black and white. There’s a conflict within the seat of power – privatized agencies with their own agenda. It’s all pretty credible – just amped up for maximum drama.

OD: Dowling’s artistic style is a perfect compliment to this celebration of life (for some) in the face of death. How did you two hook-up, dumb luck, through Titan or do you have uncompromising pictures of him?

MN: Yeah, Mike’s part in the book is everything. Without him, it would just be another script in my drawer. I saw his art for Ubisoft Splinter Cell at a con, and instantly realized how good he was. So I went after him. Like all good artists he was chockablock with work so it was a triumph of optimism over common sense. I sent him a short comic I wrote and he said he liked it but was too busy. So i drew the short myself. That convinced me that I was not the man to draw Death Sentence. So I sent him some character paintings of the main characters, a synopsis of the whole series, and the first 10 pages. He loved it! He got massively enthused and his passion for the writing gave me a lot of confidence to continue. Then by chance he came free from a project, and made it his business to draw my pages instead of taking a number of other options he had. The dude’s an inspiration. We’ve since become friends through working on the comic for so long.

OD: Will DEATH SENTENCE be an ongoing title or is it set as a mini series?

MN: It’s a six part series with a very definite ending. But I’ve got the next arc plotted out. If people buy Issue 1 then we can start work on straight away. It’s up to the public – what kind of comics do they want?