Warner Bros. gives up rights to FRIDAY THE 13TH and SOUTH PARK to get in the INTERSTELLAR business with Paramount!! 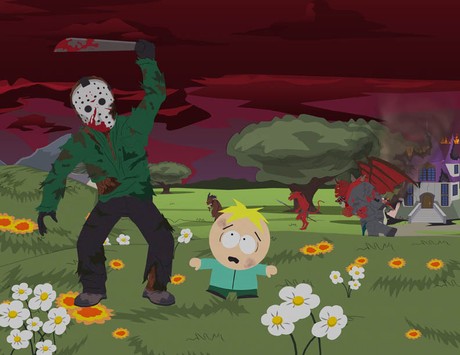 We have news that Warner Brothers wants so badly to get into the INTERSTELLAR game with Paramount that they gave back some pretty weighty properties in exchange for co-financing rights to Christopher Nolan's upcoming sci-fi flick. In exchange for their 50/50 deal on INTERSTELLAR, WB rescinded their rights to FRIDAY THE 13th (which they inherited from New Line, and actually pulled down some decent loot from on the last installment) and any SOUTH PARK feature film that Matt and Trey pull together. Also, Paramount will get to co-finance a high-profile, yet-to-be-determined Warner Brothers property. A key note in this deal: all those rights go back to Warner Bros. after five years, putting a fire under Paramount's ass to get those projects going if they don't want Yakko, Wakko, and Dot cutting in on their profits. This is good news for fans of Jason Voorhees, whose franchise, it's been said, has been on ice because of the long list of names that get residuals on every new film; one less cook in the kitchen might get another hearty helping of hockey-face out there sooner than later.

The decision kinda makes sense, given that the Nolan business has been a-boomin' for WB. Aside from the heinously successful DARK KNIGHT trilogy, they made some good money off of INCEPTION, INSOMNIA, the international grosses from THE PRESTIGE, and what looks to be at least a few hundred mil' from his producing gig on MAN OF STEEL. And I'm sure it seemed like a safe bet to get in on a go project that's a potential blockbuster at the cost of a couple movies that may, very well, never get made, or at least maybe not in the next five years. But losing those properties has gotta sting at least a little bit, especially if one of those franchises, both of which are made on the cheap and usually prove quite profitable, make a splash at the box office before the rights revert back to them.

We'll see how much dinero Warner Brothers pulls down from this deal when INTERSTELLAR opens on November 7th, 2014.