A Look At The Very Cool BATTLESTAR GALACTICA 35th Anniversary Portfolio: The Art of Ralph McQuarrie!! And More!! 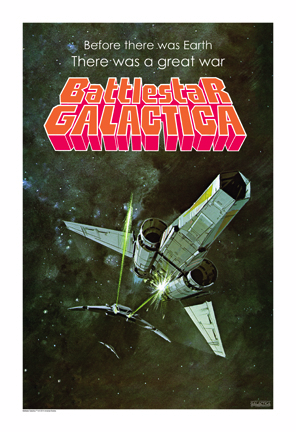 ...with a quick look at at a fantastic new portfolio available from Dreams And Visions Press.  It’s a collection of pre-production artwork from Ralph McQuarrie, a man for whom the descriptors ‘visionary’ and ‘genius’ only barely scratch the surface.

Many Geeks recognize McQuarrie as the concept artist driving STAR WARS.  His atmospheric efforts defined the SWverse aesthetic immeasurably throughout the original three feature films, and continues to do so.  We recently learned that McQuarrie’s work will be used as a stylistic template for Disney XD’s upcoming STAR WARS REBELS series, which will bridge the gap between STAR WARS EPISODEs III and IV and give us something to chew on while awaiting the theatrical release of the J.J. Abrams-helmed EPISODE VII.

Although his predominant claim to fame is the forging of Lucas’ galaxy far, far away...most folks don’t realize that he was also instrumental in shaping another legendary science fiction franchise - BATTLESTAR GALACTICA.  He was an illustrator on the original show back in 1978, bringing form to characters and vehicles which would eventually be adapted for the 2003’s “reimagined” series from Ronald D. Moore and David Eick.  There’s a perception that the ‘classic’ BATTLESTAR is a ‘ripoff’ of STAR WARS; there is, in actuality, precious little similarity between the two ‘universes.’  Evidently, GALACTICA, in one for or another, had been cooking for many years before ABC finally brought it to screens - and for many years before STAR WARS’ release.  BATTLESTAR finally being realized by The Powers That Be may well have been a reaction to STAR WARS’ unhinged success - but the show doesn’t appear to have been conceived as a derivation of that film.

This disparity of concept is hugely apparent in the new BATTLESTAR GALACTICA 35th ANNIVERSARY PORTFOLIO: The Art of Ralph McQuarrie from Dreams & Vision portfolio, which offers 24 11x13 prints of early art for the show. 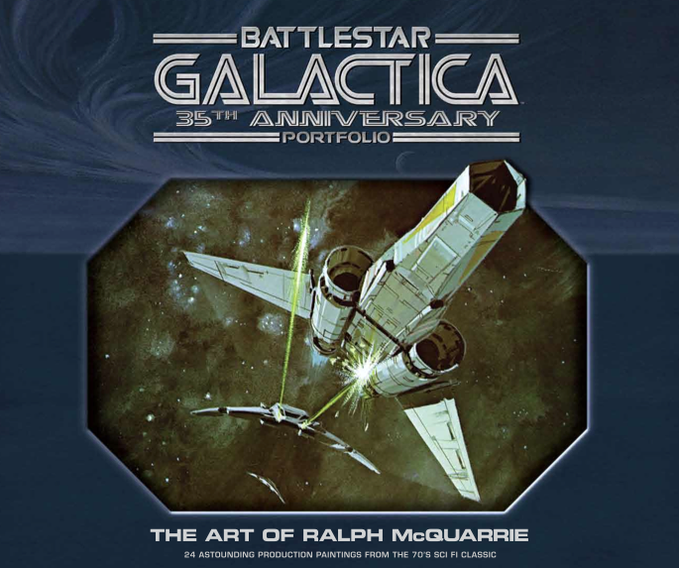 To be fair, many of these images have been seen elsewhere over the years, most notably in Starlog magazine’s exhaustive coverage leading up to (and during) the series’ run.  But you’ve likely never seen any of McQuarrie’s GALACTICA art presented in the size or clarity you’ll find in this portfolio. The  portfolio is a lot of fun - it nicely evokes the McQuarrie “STAR WARS Portfolios” many Geeks likely collected when they were kids (and could serve as a lovely companion piece to those if you still have your copies of those sitting around), and affords some interesting insight into the developmental process of a show which is far richer and more substantive in essence than many folks give it credit for.

In execution, GALACTICA often struggled to meet its very lofty ambitions - and some of those ambitions are tantalizingly presented in this portfolio.  In many ways,there’s a bittersweet quality to  much of the art herein:  an inescapable sense of ‘what could’ve been...‘   What do I mean by this?  There’s a simple, stylized approach to McQuarrie’s BATTLESTAR designs which might make some Geeks wish that his imaginings had been approached a tad more literally in the endgame.  There was an atmosphere, a sleekness, to McQuarrie’s GALACTICA world which was often diminished or sacrificed by the harder, more ‘nuts and bolts’ aesthetic the final product brought to bear.  THIS Battlestar bridge, for example, would’ve been a sight to behold (the image linked to is represented in the portfolio, but not a version image officially released by Dreams and Visions).

This Galactica shot from the portfolio - while admittedly sketchy and impressionistic - implies a ship which could’ve been at home in one of the later STAR TREK series. 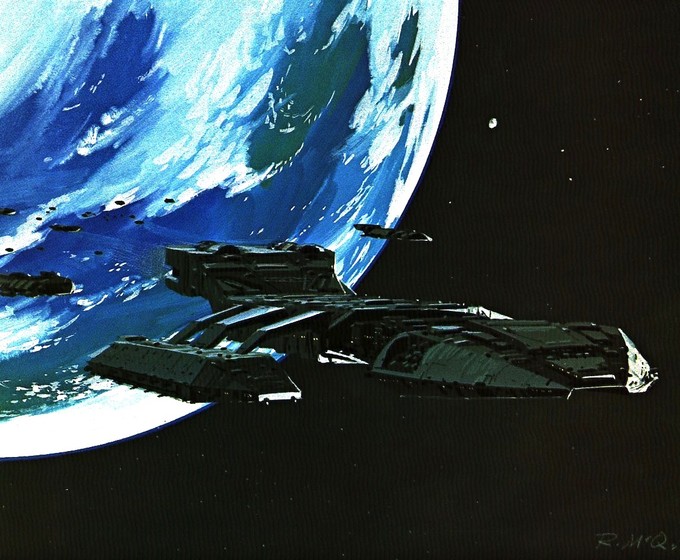 This Viper (also from the portfolio - presumably on Carillon, a world featured in BSG’s Saga of a Star World opening ‘movie’) smacks of a more pulp-ish approach to the show’s vibe. 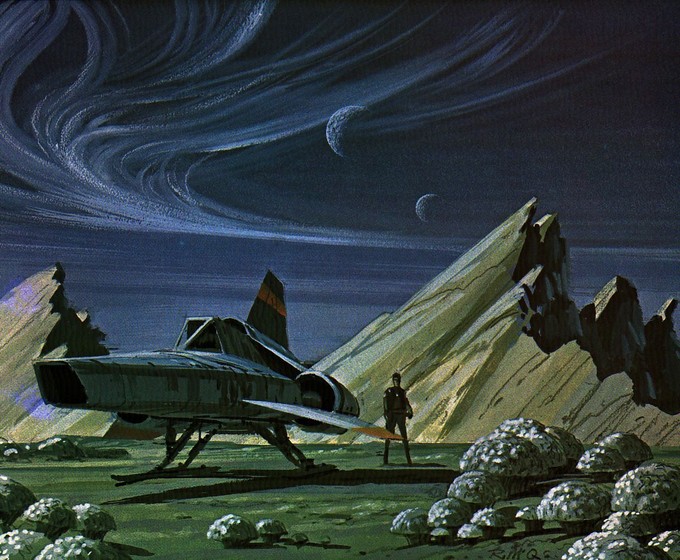 Here is a piece of poster art McQuarrie developed for the show's opening episode.  A close adaptation would ultimately become used in a variety of promotional materials for thoe show - including soundtrack covers. 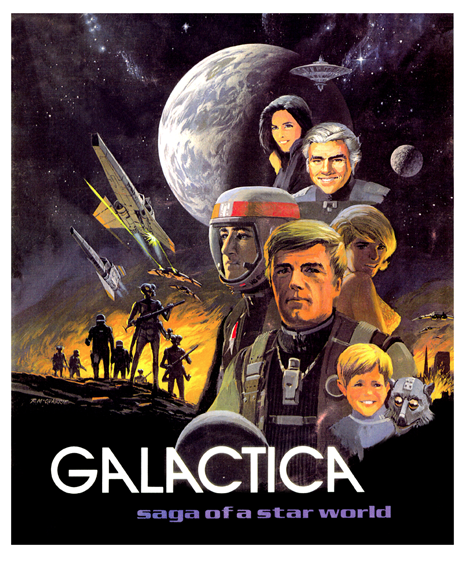 I have a tremendous soft spot for the original BATTLESTAR GALACTICA  - warts and all - which I’ve written about previously here on AICN, and will touch on again the near future.  One way we’ll revisit the original BSG is, if all goes well, is by taking a look at a forthcoming Dreams And Visions book dedicated to the broader designing of the show.

And here a few samples of McQuarrie design studies that’ll appear in that publication, including a Battlestar which looks even more like an aircraft carrier (note the aft landing bay immediately below the Battlestar's engines - landing bays were later moved to outriggers on both sides as it was felt incoming vessels could be incinerated by the big ship's thrusters to avoid this peril...)

A Colonial Viper before it achieved its more thruster-heavy, iconic form... 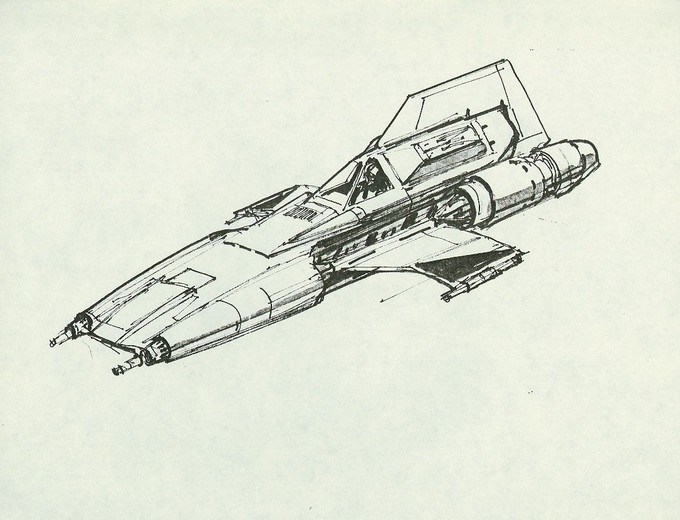 And a badass looking Cylon Raider.  Not far from what we ultimately got, but arguably a tad leaner and meaner. 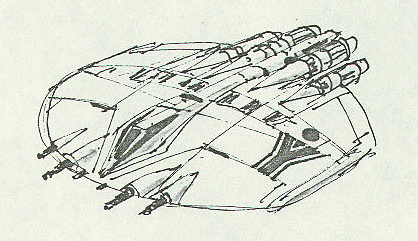 More on this soon, so stay tuned.   Until then, the BATTLESTAR GALACTICA 35th Anniversary Portfolio: The Art of Ralph McQuarrie is now available HERE.  The 35th Anniversary prints seen above and below this article can be found by clicking the pieces. 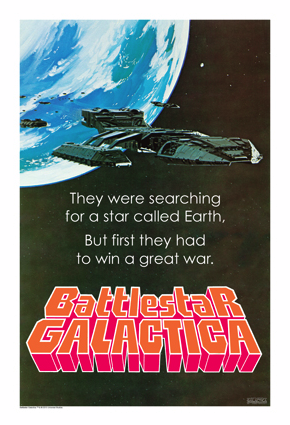