AICN HORROR has a quick chat with JK Simmons on DARK SKIES, OZ, & J. Jonah Jameson! Plus a review of DARK SKIES! 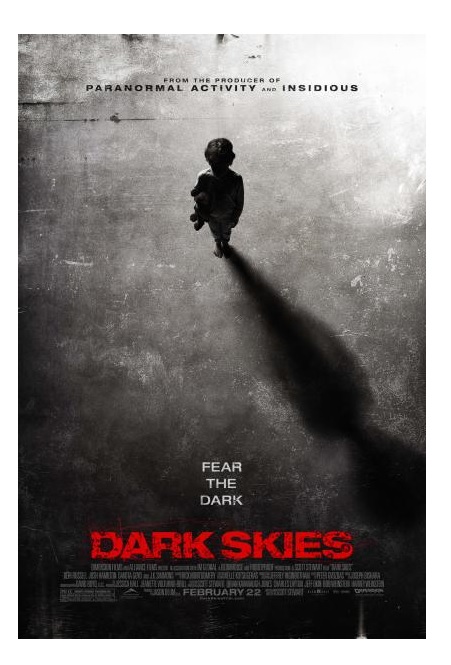 Greetings, all. Ambush Bug here with another AICN HORROR: ZOMBIES & SHARKS column. This time, I had a chance to talk briefly with one of the best character actors out there today, JK Simmons. Simmons was there to talk about DARK SKIES, but I was able to sneak in a few questions about his memorable stint as the acidic Neo-Nazi Vern Schillinger from HBO’s OZ series as well as a quick check in about his status as J. Jonah Jameson. Here’s what Mr. Simmons had to say…

AMBUSH BUG: JK, it’s really an honor to talk with you. I’ve seen so many of your films and so many of your TV shows. You have DARK SKIES coming out. I haven’t seen the film yet, but could you tell me a little bit about what attracted you to the film?

JK SIMMONS (JKS): Really what attracted me so much to it was not so much the horror aspect or the scary movie aspects, but the family story that it really revolves around. I thought it was a really nicely written movie that mixes up a bunch of genres. It’s sort of a sweet coming of age thing and a family drama and a scary movie as well, and the character himself was a seemingly crazy dude that sits around in his cluttered apartment and has too many cats and knows way too much about alien visitors. Everyone assumes that he’s just a whack job, but as you find out during the course of the movie, he’s the one that’s giving our main family some information to try and arm them against these invasions.

BUG: So are you a believer yourself in this type of stuff, in aliens and things like that?

JKS: You know what, I’m not going to say I’m a believer; I’m not going to say I’m a disbeliever. I’m open minded and I honestly saw something one night in the middle of the night in New Mexico that I can’t explain, so to that extent it’s not something that I specifically spend a lot of my time or energy on, but I’m definitely open to the possibility.

BUG: I kind of feel the same way. You just don’t know what’s going on. What was it like working with Keri Russell? 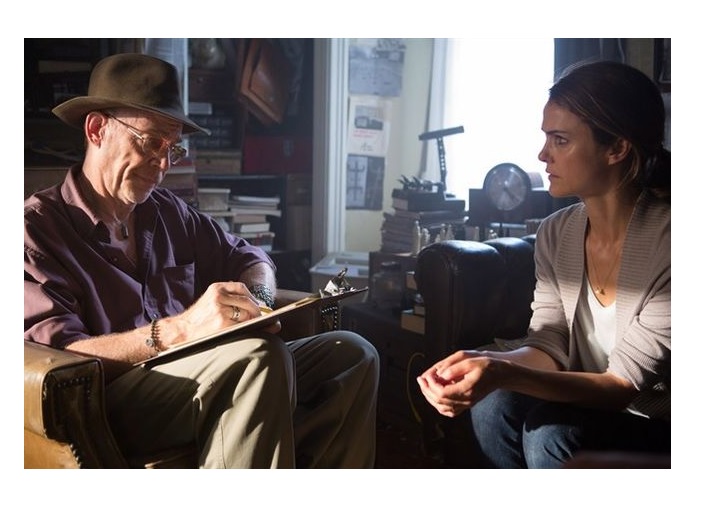 JKS: Yeah, well Keri was a part of drew me to it, too. I knew Josh, who’s a little less well known to movie and TV people, but he’s done a care amount theater work in New York and I knew about Josh from a few years ago when we were both doing stage theater and yeah, Keri, I’ve always found her to be a really compelling, intelligent, and interesting actress. So that was definitely part of what drew me to the project, beside the fact that my very limited work is just being in a room with the two of them. We all enjoyed working together.

BUG: I know that I first noticed you from OZ as “Schillinger” and that was such a fantastic, three dimensional role. Was that a hard thing to drop? Did people see you just as Schillinger when you were trying to get other work after OZ was finished? 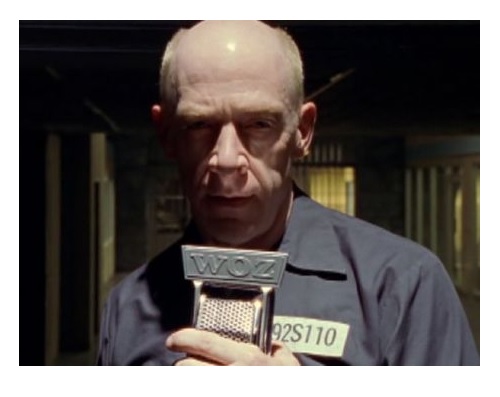 JKS: Yeah, that was a very conscious decision, because after doing eighteen to twenty years of theater I had just started doing a few on camera things and OZ was by far the most noticeable and in a way infamous thing I had done, certainly to that point. Once that show premiered, half the calls my agent got were to be the Nazi creep of the week on some TV show and I was smart enough to stay away from that and try not to get typecast for the rest of my career. I was lucky too, because within months of that the LAW AND ORDER job came along and I was then the psychiatrist, which was a nice counter balance to the psycho Arian brotherhood guy.

BUG: Yeah, not to say that you’re a lot like Schillinger, but would you say there are aspects of that character that you drew upon to play that evil of a role? 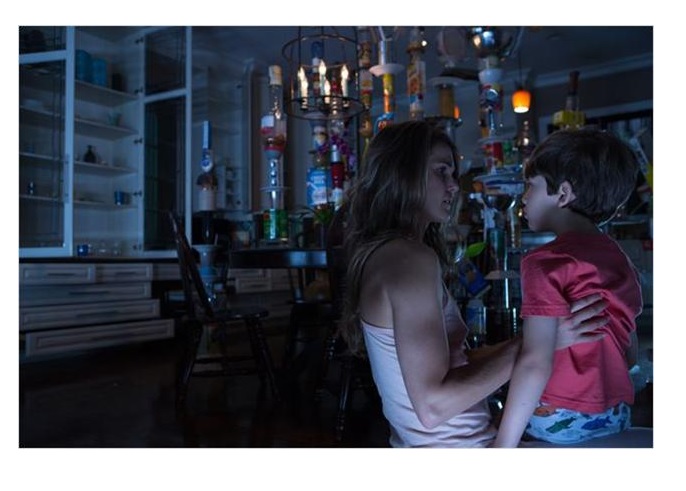 JKS: Yeah, I mean you always… or I, as an actor, I always feel like I have to find something that you can reach in and relate to in a character and in Schillinger’s case, there’s this way of thinking that I think is true among all hate groups, whether it’s the Arian brotherhood or a crazy group of any people, they don’t view themselves as evil. Evil people tend not to be consciously evil. What their perception is, is “I’m just a guy who loves my white people, my Arian brothers and we are a family” and there’s this literal family aspect of that, in my experience of any of those kinds of organizations. That’s the aspect and that’s what I kept latching on to in order to find a way to play this character and then every once in a while I’d go to Tom and I’d go “Give this guy just a glimpse of humanity…” and he would find little ways to do that, little ways to show “Yeah, he’s a sicko and he’s a bad dude, but he’s a human being,” be it his sons of grandchild… just finding a way to give him a glimpse of humanity with this guy, so he doesn’t just become a one dimensional cartoon.

BUG: Back to DARK SKIES, was there anyone you talked to about the film as far as your role and believers like that? Did you do any research as far as talking with groups to do that sort of thing?

JKS: No, to me it was all on the page and I thought it was very thorough given the world that was created for that film. I thought everything that was on the page was self-explanatory and was sufficient for me and when you’re in a room with good actors and a good director that brought it all together.

BUG: Very cool, well I just want to sneak one last thing in. I really loved you in all of the SPIDER-MAN films. Is there an opportunity for you to come back as J. Jonah in the new films?

JKS: I think probably only in animation land, which is what I’ve been doing off and on for a while now.

BUG: Okay. Well thanks so much. I appreciate your time.

BUG: DARK SKIES is available now on DVD/BluRay & Digital Download. Check out my review of the film below the trailer! 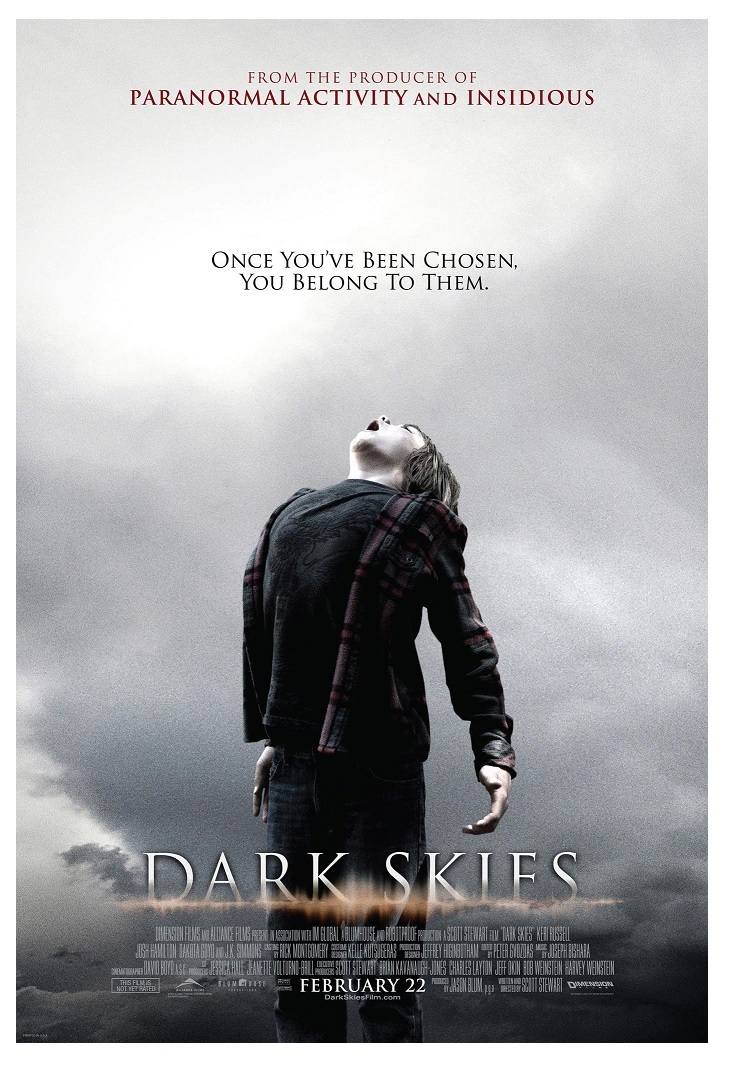 New this week on BluRay/DVD (Find this film on Netflix here)!

Though they are few and far between the good alien abduction films always succeed in freaking me the hell out. CLOSE ENCOUNTERS OF THE FOURTH KIND, COMMUNION, FIRE IN THE SKY, even THE FOURTH KIND for a scene or two; these films, for some reason, hit me on a visceral level that most other horror films don’t. Maybe because they do such a good job of highlighting the scare factor of being in your house, alone and vulnerable, and then having your life turned inside out by forces beyond explanation. Sure, this can be said with most monster in the house films and home invasion stories and ghost stories, but for some reason, they it’s grey aliens we’re talking about, it scares me a bit deeper to my core. 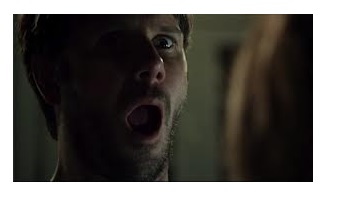 Now, I’m not saying DARK SKIES is as good as some of those other alien abduction films. There are a lot of problems with this film that follows a family as they slowly realize that their might be something CLOSE ENCOUNTER-y going on, mostly in terms of how oblivious the parents played by Keri Russell and Josh Hamilton are. Given, their lives are upside down as the visitations start with Daniel (Hamilton) desperately looking for a job while Lacy (Russell) barely makes ends meet bringing home the bacon as a real estate agent who is a little too honest with her clients, so when weird stuff happens, they’re a bit preoccupied. I know the leap for some that it mist be aliens when the kids start drawing aliens, talking about visitations from invisible people in the night, the alarms go off, and plates are precariously stacked in the kitchen in geometric shapes might be preposterous, but CLOSE ENCOUNTERS opened up this thing to the world, so for some reason making the parents be the last to know what’s going on make me feel less for them as if they deserved what they got for their obliviousness.

Still, you can’t help but care about Felicity since Russell is a hell of an actress and is able to make us want to see her safe and winning. Here she doesn’t, mostly because of her stubborn husband and a few early moves in the beginning made the character harder to like. 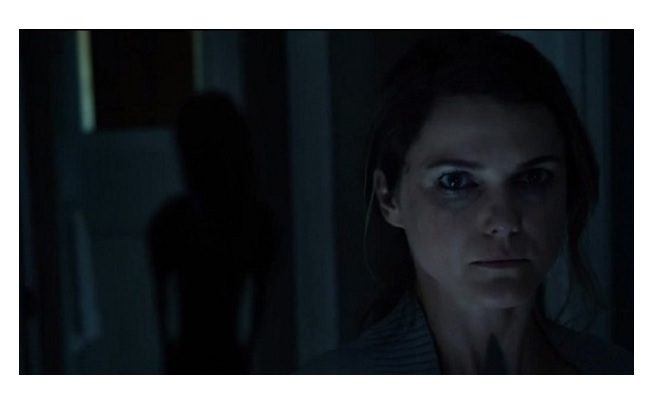 The kid actors do a pretty great job of making me care; the younger (Kadan Rockett) because he’s pretty oblivious and more of a victim here and the older (Dakota Goyo) because he does a good job of portraying a conflicted and troubled pre-teen pressured by a preoccupied family and peer pressure laden friends to do things he might not be ready to do. Both are sad scenarios and as the visitations intensify, you feel the most for them as they seem to be the ones in the most danger. Of course, it’s easy for a film to make one care about children, just linger on wide, teary eyes and bowl cuts and cue the cellos.

JK Simmons role in the film is a cameo at best, but the moments he is on the screen really made me wish the movie had centered in on him. Though the film didn’t do a bang up job at the box office, if there was a sequel, I’d rather see Simmons’ melancholic abduction expert’s story than the family featured here as they pick up the pieces of their lives torn asunder by the alien home invasion 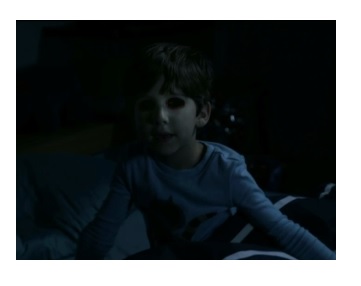 Though writer/director Scott Stewart has a patient hand with the scares, he did do a pretty decent job of making well tread territory creepy and atmospheric. There have been some pretty iconic films dealing with this material, but the film did a good job of pulling me in—probably because of the talented cast, but also because of a nice sense of an increasing foreboding feeling. Those who like to see the monster in films will most likely be disappointed and there are no anal probes to be found, but kind of like most monsters when brought into the light, the little greys aren’t really scary when you actually see them. Bathing them in shadows and quick glimpses is enough to really make things scary and that happens a lot in this film.

DARK SKIES doesn’t really blaze new trails in terms of alien abduction films, but it does hit all the beats effectively. The cast is top notch, though the story could have used a bit more JK Simmons if you ask me. All in all, DARK SKIES does a good job of making us care before trying to steal us in the night. For that investment that this film gave me and some gripping scenes in the dark in the middle of the night, I found DARK SKIES to be entertaining enough to earn my recommendation.