Hey folks, Ambush Bug here. Just in case you didn’t get to last weekend’s C2E2 (Chicago Comic & Entertainment Expo) doesn’t mean you can’t enjoy it. Thanks to Jamie Coville, we have panels to share with you guys all week! So check out the panels by clicking the titles below! 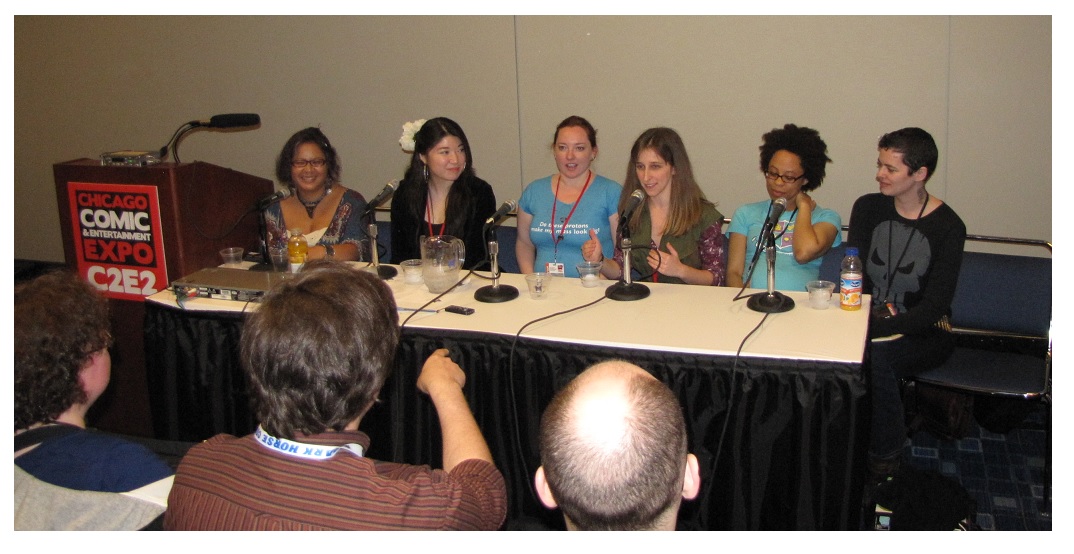 Sponsored by ChicagoNerds.com , Michi Trota, Dawn Xiana Moon, Laura Koroski, Jen DollFace, Erin Tipton and Karlyn Meyer talk about the supposed fake geek girl and why people are so focused on the topic as of late. The group talks about "Gate Keeping", the process where other geeks try to determine who can and can't call themselves a geek. The group had asked the women in the audience how many "geek credentials" questioned and almost all of them raised their hands. They also talked about it not just happening by men to women, but how other women did it too (with one of the panelists admitting having done it in the past). They also went into how really attractive people go through this as well.

Derf Backderf talked about his Graphic Novel My Friend Dahmer. He explained he was a friend and a fan of Dahmer in high school in the 1970s. He showed lots of pictures of Dahmer back then. He talked about the strange antics that Dahmer in high school that was (then) funny to him and his friends. He also talked about how the media, from the top to the bottom of the respectability scale were leaving messages on his answering machine and were parked outside his home and banging on his door at 6AM to get an interview. Backderf talked also about the history of the book and how he spent 20 years researching the book, from talking to his old high school classmates to going back to his high school and getting into Dahmer's old house. Derf answered questions from the audience. The last bit of the panel got cut off due to space on the recorder.

Thanks, Jamie, for the coverage!