Harry here.   I can't remember a time when I didn't know the name of Ray Harryhausen.  My parents would show me his films and speak his name aloud everytime I asked how they did that.   It was as though this single name, this Ray Harryhausen was alone blessed with the ability to bring toy sized creatures to big screen life.   I knew of other stop-motion animators, but it was Ray that owned me.

Reading issues of Famous Monsters of Filmland which seemed to always tell me that Ray Harryhausen was a friend of fandom.   In fact he was amongst FMOF creator Forrest J Ackerman's best friends & this man Ray Bradbury.   It was through Harryhausen that I discovered Bernard Herrmann and Miklos Rosza.   It was searching for information about Ray that led me to Starlog, Castle of Frankenstein, CineFx, Cinefantastique.   I discovered Mythology because of Ray.   I dreamt of impossible things because of Ray.   I collected Paper Mache' recreations of his creatures at conventions from a sculptor named Johnny Fischner, because no toys existed.   Beginning at the age of 3 I was selling Harryhausen Stills at conventions and having crazed enthused conversations with fans about his films.

I've never had a friend in my life that I didn't introduce to his films - and they dazzled all.   Harryhausen on VHS was a godsend.   There I was stuck on a Ranch in the middle of North Texas far away from everyone I had grown up with - and Ray's films not only helped keep me sane, but they helped me to communicate to the friends I made up there.   Watching small town kids go wide-eyed with awe over his work...  and me explaining how he did it - them not believing me, then pulling out RHFX or my Ray Harryhausen Fantasy Scrapbook and showing them images of Ray singularly working with his most wonderful toys.   It amazed them.   It help me to discover that while most people were not as geeky as me, they would listen as I told them how movie magic came to be.   I recorded every program I could find in the TV Guide that would have Ray on it.

Ray Harryhausen became part of how I communicated with the world.  It opened up the most amazing film conversations.   As I read comics and saw creatures and characters that were impossible, I would animate them in my mind as Stop Motion creatures.   In my mind growing up I prayed for new Harryhausen films.  I read rumors about Sinbad On Mars, it was reading in his book that he had considered an adaptation of LORD OF THE RINGS - that made me reach out for that book.

He influenced me to read the works of Jules Verne & H.G. Wells and Ray Bradbury.    My god - the visions those gave me.

Ray gave me an appreciation for the artistry of Europe by often times shooting there.    Hitchcock used famous locales...   Ray destroyed them.   Watching that 6 tentacled octopus destroy The Golden Gate Bridge is always what I think of when crossing it.   When I went to Washington D.C. my senior year - It didn't take much to imagine Ray's saucers toppling the Washington Monument and destroying the Capitol dome.  By the time he was blowing his Ymir off of the Colesium in Rome...  I became adept at traveling to places with my parents and imagining fantastical creatures destroying all of the best archetecture.   This is something I still do today.   I just can't help it.   I'm tired of humans destroying our world.   I want monsters.

That changed.   As an 18 year old, helping my Dad at a Dallas Fantasy Fair, I was watching our booth when Ray Harryhausen walked up - utterly delighted by all the truly vintage movie posters and collectibles that my Dad and I sold.  We had a good 700-800 posters bagged and boarded - and Ray was determined to look at them all.   Ray was a tad troubled at the time.   He'd seen the CG test for JURASSIC PARK and felt that he was soon to be forgotten.  I felt the new medium would simply shine a brighter light upon his work - which everyone was still struggling to top.  I asked Ray about the secret to his monsters and he smiled at me.   He said the most important part was to not think of them as monsters.  He told me that all of his creatures were animals first - reacting, often times violently, but that it was important to think of the creature at rest or at play.   Before the threat raised its ire.   Cuz then you could see that the creature wasn't a monster, but something magnificent.

Magnificent indeed.   Ray spent about 3 hrs with me that day.  A few years later at the same convention I sat with him and Ackerman as we watched a restored print of THE LOST WORLD with newly found footage and the two of them described to the restoration folks what scenes were still missing.  You see - they'd seen the movie so often upon initial release that they remembered which pieces of nitrite were still missing.  Ray was so giving of his time and knowledge.

Throughout my life - I've been blessed to meet some of the greatest filmmakers working today and to form friendships with them.   Inevitably, it always comes around to Harryhausen and his films.   When I met Randy Cook on the set of LORD OF THE RINGS - in-between takes we'd not only talk about Ray's work - but we'd act out little motions that Mighty Joe would do - like when he'd pound the ground to express frustration.   Or the way the Cyclops Lugosi'd the air with his hands as he roared on the beaches of Colossos.   We've been friends ever since.

There was even a time when I was working to try and help Ray Harryhausen to get his dream project of WAR EAGLES off the ground.  It's still a film I'd love to see get made - exactly as written.

I found myself obsessed with Gustave Dore because of Ray.

That I got to bring Ray to Austin and screen KING KONG and talk with Ray about that film with an audience...  it was too good.   Everytime I met and did something with Ray - I was in awe.   The DragonCon panel I did with Bradbury, Harryhausen and Harlan Ellison was and remains one of my greatest memories, but getting to bring Ray to Austin and to screen the 1933 KING KONG with him - and to do that Q&A...  it was just heaven.  Ray discussed how seeing that film changed his life instantly and forever for the better.   Moderating the Q&A was great.   Afterwards, we all went over to Rodriguez's GRINDHOUSE set - where Tarantino was celebrating his birthday on set.   That was March 27th, 2007.   Since then, I'd had a couple of phone conversations - but mainly updates through mutual friends.

Right now - after writing about Ray and some of the memories I have with him - I'm struck by the wonderful gift Ray gave me.     The ability to see what isn't there.  Ray made his films out of a frustration with the times he was living.   He'd watch Douglas Fairbanks in THIEF OF BAGDAD, but they'd skip his favorite, most fantastical parts of the story.   He'd go see ONE MILLION YEARS B.C. and be frustrated by iguanas with fins.   Instead of focusing on bitching, he focused on creating the visions he always wanted to see.

Ray wanted people to see and believe in the impossible.   The bigger than life.   He understood that legends could be improved for film - that is why TALOS grew in stature and magnificence.

TALOS.  Talos is precious to me.   From Ray's amazingly restrained animation to the mind blowing sound mixing and Herrmann score.   It lives in my imagination constantly.   When my father started his own Bronze Foundry as a boy, he called it TALOS FOUNDRY.   And my wife and I have agreed to name our first boy TALOS.   Yeah, she rules.

Here at the end of this rambling love letter I'm at peace, in fact now...  I'm smiling.

When a hero dies, it's easy to be angry.  At one point I tweeted that I didn't want to write this obit, that all I wanted to do was break stuff and scream.   But as I organize my mind and memory - as I remember the first time my nephew at age 3 sat next to me and watched 20 MILLION MILES TO EARTH - and as I saw him cry as Ymir was blown off the top of the Coliseum...  Well - it was the first time that I knew...  My nephew was awesome.   Harryhausen made him cry for the Baby Venusian that was doomed to grow and be misunderstood by a fire-first American military.   That the boy didn't cheer the death of the monster, but mourned it.   That's important.   That's Tim in Crichton's JURASSIC PARK when the T-Rex gets gunned down.   That's the key bit of empathy that we need to love our monsters and to see them for everything they could have been...   Had we not mucked it all up.

Ray has given me a connection with generations older and younger than me.   And he always will.  He's a part of all film geeks lives, whether they acknowledge it or not - and it's our duty to get them to acknowledge it.

As I scan my eyes about my room and see the warmth that I feel from the Beast from 20,000 Fathoms or the joy of Ray's Medusa...  as I think about the wonder of Mighty Joe Young or the magic of the lamp from 7th Voyage.   Or as I listen to Miklos Rosza's brilliant music and can see clearly in my mind, that technocolor cave from Golden Voyage of Sinbad...   Or if I think about the time Dad & I bought the Dodge Durango - and called it the ARGO because of the Ram Head embossed on everything and drove across this country with my nephew as Herrmann's ARGO sailing theme boomed...

Ray Harryhausen is alive in me and everyone he ever touched - be it a gracious and warm handshake or his love of dinosaurs and fantasy.    Harryhausen and Bradbury taught us that we can be children for a lifetime.   A sense of fair play and a joy of discovery.   We are all so lucky to have lived in the wake of such genius.  He gave odd children that only made sense of the world through Ray's fantasies...  he gave us a collective playground to imagine in.  He never wanted to give a child a nightmare, he wanted to give them dreams.  He succeeded beyond his wildest imaginings.   The world is infinitely better for his being a part of it.

Now, let's pass all that he gave us to all that we meet. 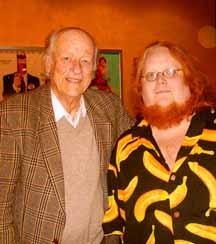 Yes, I did wear my Banana Shirt when I hosted the 2007 screening of KING KONG with Ray - and it made him smile!

I chose to always honor Ray if given the slightest excuse. Here's me and Phil Tippett doing a whole episode of last year's show on the awesome of Ray Harryhausen: