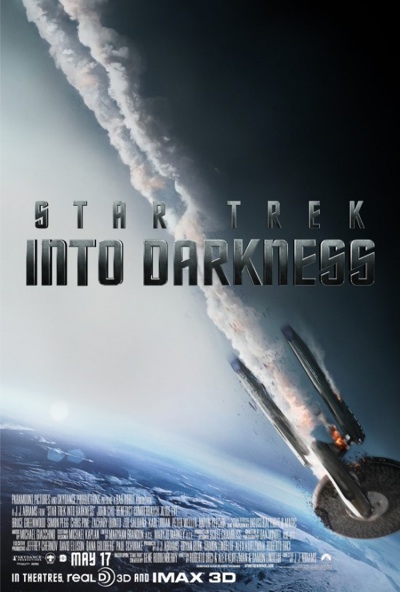 (Apologies to the spoiler-sensitive, but I have no interest in writing about this movie without addressing its major reveals.)

J.J. Abrams’s STAR TREK wasn’t just a “reboot”; it was an exhilaratingly heartfelt resurrection of a forty-plus-year-old franchise that had seemingly outlived its usefulness. While it didn’t exactly rekindle an interest in boldly going where no human has gone before (manned space travel isn’t much of a priority nowadays), it did evoke the hope and swagger of Gene Roddenberry’s original series. It also created an alternate timeline in which Captain James T. Kirk and the crew of the starship Enterprise could explore the universe anew, thus allowing old-school Trekkers to enjoy the new movies without losing their Vulcan minds. Given the well-documented zealotry of the series’ fans, this was a not-insignificant miracle.

So if you were to ask me what one thing Abrams and his screenwriting brain trust of Alex Kurtzman, Roberto Orci and Damon Lindelof could do to erase the goodwill built up by STAR TREK ’09, my answer might very well be, “Bring back Khan, get him caught up in a silly conspiracy that involves going to war with the Klingons, then rush through a surfeit of nonsensical incident as you mechanically build to an unforgettable moment from someone else’s better movie.”

To that end, STAR TREK INTO DARKNESS is a rousing success.

The film starts promisingly enough with Kirk and Bones fleeing a body-painted tribe of aliens as a massive volcano spurts and shakes in the background. Kirk and Bones are disguised so as not to reveal themselves to the planet’s indigenous populace (in accordance with the Prime Directive), but they’re running out of time; so, in a masterfully handled piece of parallel action, is Spock, who’s been inadvertently stranded in the pit of the volcano with a bomb designed to quell its life-obliterating fury. Once back onboard the submerged Enterprise, Kirk is faced with a no-win situation: let Spock die alone in the volcano, or violate the Prime Directive and transport his Vulcan buddy to safety before the device detonates. Kirk, being Kirk, chooses to do the latter.

Nicholas Meyer’s STAR TREK II: THE WRATH OF KHAN, to which STAR TREK INTO DARKNESS openly invites comparison, was about an aging Kirk contending with his own mortality, and learning, via his best friend’s sacrifice, that you cannot cheat death. It is about accepting the ultimate no-win situation. It is also a finely crafted screenplay that draws on seventy-nine television episodes, one feature film and two classics of literature (A TALE OF TWO CITIES and MOBY DICK) to give the central conflict and, most importantly, the Kirk-Spock friendship an emotional resonance that, at the time of its release, was both surprising and well-earned.

From the moment Zachary Quinto’s Spock, facing death in the volcano, blurts out “The needs of the many outweigh the needs of the few,” we know the reference, and, as a result, we’re pretty sure we know where STAR TREK INTO DARKNESS is headed. But these life-or-death concerns feel premature for this still inexperienced crew. Little has changed since the first movie. Once Kirk is back on Earth, he’s bedding a couple of extraterrestrial females and brashly talking about getting his five-year mission. He’s still a cocky, flyboy pussy-hound in dire need of an ass-kicking. Obviously, Abrams and his writers are setting Kirk up for the ultimate teachable moment, but this portentousness doesn’t mesh well with the gee-whiz energy Abrams has brought to the franchise. The stakes needn’t be so high so soon. Let Kirk be Kirk for a movie or two before you have him play chicken with his own mortality.

Unfortunately, this film is hell-bent on solemnity. Immediately after the opening titles, we meet Benedict Cumberbatch’s mysterious John Harrison at a London hospital, where he offers a distraught father a miracle cure for his dying daughter. The price: papa has to perform a suicidal act of terror against Starfleet. This necessitates an emergency command meeting back at Starfleet HQ in San Francisco, which is precisely what Harrison wants; moments after convening in the top-floor conference room, Harrison pops up in a heavily-armed aircraft and opens fire. Kirk, who’s present despite having been relieved of his command for violating the Prime Directive, loses someone dear to him, which places us squarely in the realm of a revenge film. But it’s Kirk who’s overcome with bloodlust this time, not… that Harrison guy.

By now, you know Harrison is Khan, and the film’s narrative drive is hampered by Abrams’s decision to make this a mid-film reveal. It’s completely unnecessary. Fans will work out the mystery immediately, while non-fans simply won’t care. The moment Khan hisses his true identity at Kirk - from behind a glass partition ala Hannibal Lecter, one of several visual tropes Abrams has lazily borrowed from other films – is played for maximum “Holy shit!” effect, but we’re only relieved that the characters can stop referring to the bad guy in relentlessly banal terms. That they have to go to go to such superfluous lengths to build up this suspense is troubling in that it suggests Abrams and company are more concerned with fan service than telling a compelling story.

Indeed, fan service is the film’s gradual undoing, to the point where a main character’s fate actually hinges on it. Though Abrams pulls off a couple of thrilling set pieces throughout the course of the film, you’re never completely immersed in his Trek universe because he’s constantly making cutesy callbacks to the original one from which he so deftly, respectfully separated four years ago. For a filmmaker who’s been so vocal about expanding the Trek brand to international markets (where the franchise has traditionally struggled), he seems overly concerned with not alienating the base. As someone who’s been a member of that base since childhood, I can assure Abrams he has nothing to worry about. He bought himself unlimited leeway when he established an alternate timeline.

Whereas the first film ably defined its core characters through non-stop action, STAR TREK INTO DARKNESS reduces them to squabbling, preoccupied bores. The Spock-Uhura relationship is Bickersons-level comedic business (overall, the banter is nowhere near as snappy this time out), while Bones is all but relegated to the periphery. The only crew member who really gets to shine is Simon Pegg’s Scotty; his frantic fumbling with a closed airlock as Kirk and Khan rocket toward him at terminal velocity is one of the film’s few high points.

Along with the opening sequence, that set piece reminds us that Abrams can deliver invigorating big-screen entertainment; sadly, the rest of the movie is a hectic, flatfooted grasp for greatness. The problem is right there in the title: STAR TREK INTO DARKNESS insists on its own weightiness. That it forces its hand by shamelessly pilfering from the greatest big-screen TREK of them all is unforgivable. It’s so misguided that, frankly, it makes STAR TREK ’09 look like a lightning-in-a-bottle accident.