Ahoy, squirts! Quint here. Little old me was newly home after my weekly piano lesson (look out ladies!) when I get a message from Harry saying we got an Iron Man 3 review from Australia. The calm version of his chat was focusing on how the reviewer compared Ben Kingsley's Mandarin to Heath Ledger's The Joker... except add in a few all-caps and a ton of exclamation points and then you get a little closer to the full Harry Id.

I don't get to see the movie until next week, so I was a little nervous reading through this review, but it's fairly spoiler-free. Thank God, or else I would have had to punch the internet in the face.

Now here's "Troy Soldiers" with his thoughts on the superhero sequel! 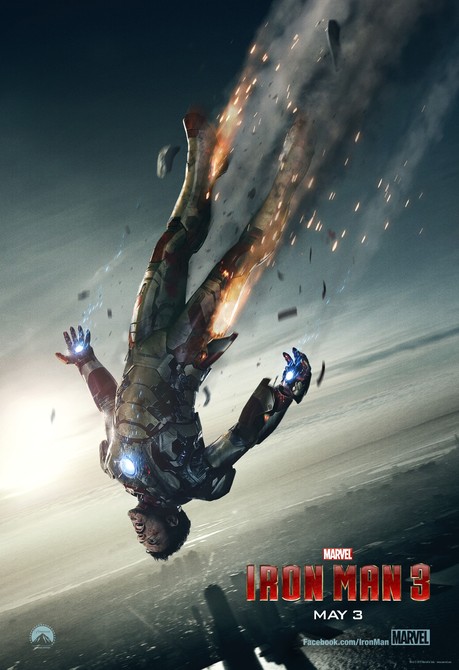 I really hope Robert Downey Jnr isn’t being completely truthful when he’s suggested that he won’t be returning as Iron Man after the next Avengers film, because he’s not only Iron Man; Robert Downey Jnr IS Tony Stark.

The events of The Avengers haven’t been easy on Tony Stark. It’s rattled him. He’s suffering from PTSD and Anxiety. He can’t sleep. He’s not paying Pepper Potts (Gwyneth Paltrow) the attention she deserves. He’s so distracted in getting his Iron Man technology perfect; he’s already up to version 42, or Mack 42 as his newest suit is affectionately known as.

The Mandarin, played to absolute perfection by Sir Ben Kingsley, is the latest villain introduced into the Marvel Universe (now in Phase 2). In a world now occupied with aliens and alternate universes, Marvel have had to introduce a villain that is completely badass, and can believably be considered a threat after the events of The Avengers – and they’ve definitely succeeded.

Although he considers himself a teacher, The Mandarin is essentially a terrorist’s terrorist. He ticks all the boxes. He has a loyal army, he’s not afraid to kill for his cause, and of course, he hates America. Originally in the comics, The Mandarin (not surprisingly) is Oriental. Marvel Studios copped a bit of flack online when it was announced Sir Ben Kingsley was cast. But let me tell you, he’s brilliant. His turn as this villain is up there performance-wise with Heath Ledger’s turn as The Joker. He is that iconic.

After Tony Stark threatens The Mandarin, he responds by destroying Stark’s home/workshop and all his Iron Man technology. Stark is only left with his Mark 42 prototype, which isn’t ‘battle ready’, resulting in us dealing with Tony Stark a lot more than Iron Man. This is a welcome change, it really humanizes Tony Stark/Iron Man. He’s not the cocky, confident, wise-cracking Tony Stark we know from the previous films. Downey Jnr really gives his best performance of Tony Stark to date.

The film’s director (and co-writer) Shane Black has to be credited with getting such a good performance out of Robert Downey Jnr. In 2005, he cast Downey Jnr in the little-seen thriller Kiss Kiss Bang Bang. If you haven’t seen this film, make the effort to catch it. I believe it is some of Downey Jnr’s best work, and it’s the role that helped land him the original Iron Man gig. Shane Black has been around the business for a lot of years. In his 20s, he wrote Lethal Weapon, who many consider one of the pioneering films of the action genre as we know it today. So he knows action, and it really shows – the action sequences in this film are EPIC.

The visual effects team at Peter Jackson’s WETA studios are on top of their game as usual, it is hard to imagine the man-hours that went into making this film look as good as it does. The amount of people credited to the visual effects department in the film’s credits were impossible to count.

The supporting cast are all great. Gwyenth Paltrow, Don Cheadle and Jon Faverau are all back as Pepper Potts, James Rhode/War Machine/Iron Patriot and Happy Hogan respectively. Guy Pearce is fantastic (as always) as Aldrich Killian, a nano-scientist who has made a ground-breaking discovery in DNA evolution who attempts to involve Stark Industries in his Extremis Project.

I’m really loving what Marvel Studios are doing with the film versions of their source material, and if you can stick around, make sure you catch the post-credit scene, it doesn’t disappoint.

Iron Man 3 is up there as an almost perfect superhero film. This one will get multiple viewings for sure.