Are You Ready For BAYMAGEDDON?

I won't lie.  Over the years, Michael Bay has grown on me.  I still think the TRANSFORMERS movies are awful for the most part - I like the first one and there's moments in the third that are pretty great, but the second one is one of the worst movies I've ever had the displeasure of seeing.  But when Michael Bay is unleashed, it's something to behold.  The best Bay movies wipe their ass with physics books while causing constant mayhem, and (the very best ones) are unapologetically offensive, sexist, and all of them are in their way fan-fucking-tastic.

This is the part of the article where I try to convince you that BAD BOYS 2 is some kind of insane masterpiece, but frankly. if you don't know, I can't teach you.  There are a lot of socially-aware filmmakers out there, like Michael Moore, who make movies to expose various injustices in the world.  I know Michael Bay hates poverty.  He hates it with every fiber of his being.  Do you know how I know that?  Because in BAD BOYS 2 he destroys a shantytown in Cuba with a Hummer.  Just devastates it.  THAT is passionate, advocate filmmaking.  He literally runs poverty over.  I can also talk about how Michael Bay hates death by using corpses in a car chase, but that is a digression from what this article is about, so...

Next week, Michael Bay's crowning achievement in cinema opens.  PAIN & GAIN, crazily enough, is Bay's version of a Coen Brothers movie, with Mark Wahlberg, The Rock, and Anthony Mackie kidnapping Tony Shalhoub for money, and how things go horribly wrong.  But nothing goes horribly wrong in a Bay movie - they go awesomely, spectacularly, horribly wrong.  I'm not kidding when I say that PAIN & GAIN is one of my most anticipated movies of the year, and I can't wait to see it.  And you can see it early this Sunday if you live in Houston, Austin, Kansas City MO, or Littleton, CO!  There's even a special menu, full of carbs, protein, and Bayliciousness. Here's the Alamo Drafthouse press release with more:

Alamo Drafthouse is proud to present a special marathon-screening event: BAYMAGEDDON – in Austin, Houston, Kansas City and Littleton. The event will feature a collection of Michael Bay movies, audience games as well as a customized themed menu.
Michael Bay has crafted some of the most badass and all-around enjoyable films ever screened in a darkened movie theater...and that is why this April the Alamo Drafthouse, Tough Guy Cinema and Paramount Pictures are celebrating Bay's new release with a non-stop, all-day, all-Bay mainline of eye cocaine called BAYMAGEDDON. Alamo is putting together a collection of their favorite Bay films in an attempt to PUMP YOU UP for a FREE early sneak preview of the white-knuckled thrill ride of his return to form, PAIN AND GAIN. You read that right... four movies, one unadulterated manly night of muscles, mayhem, a mutual love of a man and his craft and any excuse for cinematic mayhem. There will be on-stage games, custom Bay-tastic preshows, prizes, giveaways...and who knows there might even be a surprise or two? If this is your first time Baying, watch out...because once you go Bay, then there's no other way.

You can buy tickets for this event ($30) here: http://drafthouse.com/blog/entry/baymageddon_is_nigh_this_sunday_april_21st

So, Austin, Houston, Kansas City Missouri, Littleton Colorado - you read to get BAYSPLODED?  I know I am. 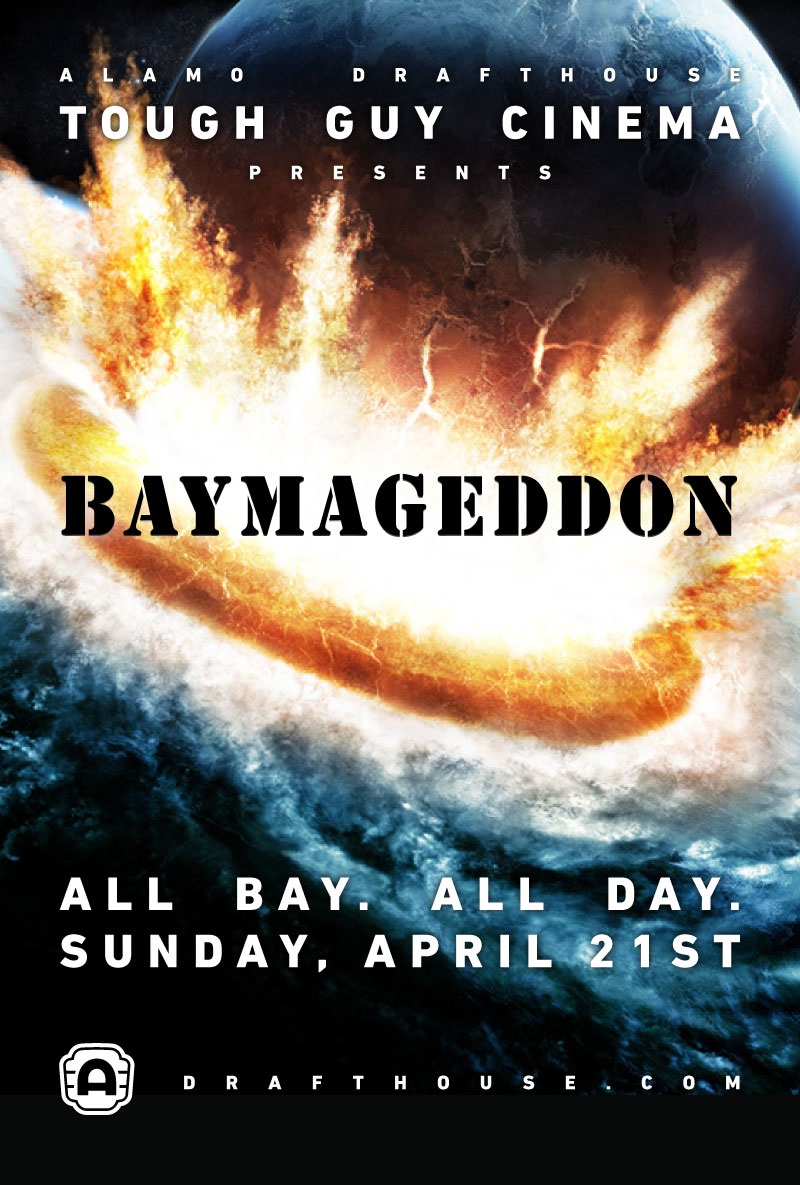