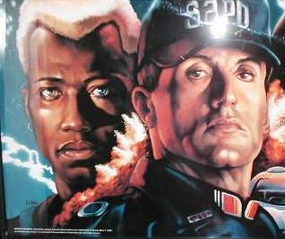 UPDATE: Seems the Tweet is no longer on Sly's Twitter Feed.  I have multiple emails, including from AB King that Sly did tweet it.  Let's see what we hear.

Hey folks, Harry here...   If Sly gets Mel Gibson to direct an EXPENDABLES movie - then they need to make it THE WILD BUNCH of the franchise.   A film that just ends the action genre.   The UNFORGIVEN of the blow shit up genre.    Sly tweeted that Wesley Snipes joined the crew tonight and that makes me damn happy.  Hope Snipes brings his A-Game.   No word as to a character description yet, so we don't know if he's on the team or on another team... or the guy that's gonna kill them all.    Who knows?

Thanks goes to Robocop for dropping me a line with the following tonight:

RoboCop here, Sly tweeted that Wesley Snipes is officially in Expendables 3. Hopefully as a bad guy badass working for a crazy Nic Cage. He's also trying to get Mel Gibson to direct and says he's trying to convince Mel to join. Don't care about what celebrities do as far as mistakes and stupid decisions since you can't look at Gibson without recognizing a great filmmaker. Braveheart...no need to explain, Passion was a very hard to watch impossibly emotional movie and watching it in a room full of churchgoers who gathered in prayer groups during the film shows the power that film had. Apocalypto was just a beautifully shot and really unique picture, and of course Mel's return to movies with Edge of Darkness was a great way to showcase his talent in a drama instead of doing a lethal weapon styled comedy. Also I really enjoyed Get the Gringo. I hope people can see that someone with such a talent for filmmaking and a proven record in directing would elevate the next sequel and make fans of all these actors even more anxious. I'm a fan of the site, love everyone's geekness for film.