Roger Ebert and The Fat One! By Harry

I awoke to a world mourning the loss of my friend, Roger Ebert.   Roger was not the most influential person on the planet for me about film, that’d be my father.  As a kid growing up I read Ebert’s books and Maltin’s books.   As a teenager I discovered Kael.   But growing up with Siskel & Ebert on my local PBS channel, following Matinee at the Bijou…   well, it was the only outward sign of Film Love that I saw on Television.   Two men arguing about films – and me and my family arguing with them.  That was echoed all over America.

It is still incomprehensible that I ever sat across the aisle from Rog.  I really don’t know why I called him Rog on air, I think I blame Shane Black for having Riggs call Rog,  “Rog,” in LETHAL WEAPON, but it seemed to make him smile.  I joked that I made him the thin one, and he laughed.   As we went to tape each show, we had no idea what the other thought about the films we’d review, until they started speaking.  When I’d finish my verbal review, looking across the aisle and seeing Roger Ebert engaging…   It can not be expressed how that made me feel, but thinking about it right now, closing my eyes and picturing him there on that set.   The little miniature set below the balcony – creating a forced perspective…   And then Roger would begin.   It was seriously the most fun I ever had.

I’ve cried a lot today, but these aren’t the first tears I’ve had for a man I considered a friend.   He reached out of nowhere to pick me to come on his show.   I know why – it is the combination of 4 people.   Quentin Tarantino, AICN’s Annette Kellerman and Jeff Dowd – the man that inspired “The Dude,” and Louis Black.   There was a Jack Hill double feature of SPIDER BABY and SWITCHBLADE SISTERS.   Tarantino was supposed to host, but he apparently got sick and didn’t make the flight.   Louis Black asked if I would sub for Quentin.   I made Louis intro SPIDER BABY, as that was my introduction to the film, but I said I’d intro SWITCHBLADE SISTERS – as I remembered Tarantino’s amazing intro of it at QT Fest as well as having my own love of the film.     It was on the top floor of GSD&M’s Parking Garage – and somewhere on that rooftop was Jeff Dowd.   I was terribly sweet on Annette Kellerman at the time and she was thinking of taking off with someone and not watching the film, so I asked her to watch my intro – and see if she wanted to stay.   I also had to pee, real bad.   I gave an insane intro to the film that got the audience very excited, Annette stayed – and Jeff Dowd during my intro dialed Roger and told him I would be a great co-host on his show.   Roger listened and quickly thereafter I got the call.

I had the blessing to get to have the onscreen film discussions with Roger on films like SLC PUNK, PUSHING TIN, BEING JOHN MALKOVICH, GALAXY QUEST, PRINCESS MONONOKE, MIGHTY PEKING MAN, EL TOPO, SONG OF THE SOUTH, AMERICAN BEAUTY and more.

Without those trips to Chicago, I don’t know if I’d ever have met my dear friend and correspondent from Chicago, Capone aka Steve Prokopy.  He and his friend Chi-Town Charlie had drinks with me the night before my first taping.   Just after I had a private dinner with Roger.

That’s my favorite memory.   Sitting at  a restaurant and talking with Roger Ebert about his real life sexual fetishes, versus what Russ Meyer claimed about him.   It was amongst the most surreal and curtain pulling experiences that I’d ever had.   This was Roger Ebert the man, not the guy on TV or the man that wrote in the paper.   Roger only wrote one legitimate fan letter to me in my life – and oddly enough it was over my BLADE II review, which he claimed he was envious of.   No shit.

On set, before we’d shoot he demanded that I play Patty Cake with him, “to get our energy up!”  He told me it was something that he and Gene did.   In between takes, he told dirty jokes with the crew on set – and he was absolutely delightful.

When I was working on my material, they had me sit at Gene’s actual desk with my laptop…  The desk had family photos -  a note from Danny Mann, the actor that played the voice of Ferdinand the talking Goose from BABE and BABE II: PIG IN THE CITY – thanking Gene for his insistence upon a FERDINAND stand alone film.   And then Rog would call me into his office.

I did a few shows with Roger, but the one we both loved was the CULT MOVIE SHOW – where we weren’t reviewing any current release titles, but were instead celebrating  films that either had a cult or certainly deserved to.   It’s the closest we ever had to really capturing a conversation between me and Roger.   It was effortless to talk movies with him.

I met a lot of the folks around Roger on the Floating Film Festival from 1997.   I was there to present the film, TWO FAMILY HOUSE.   Roger was doing his CITIZEN KANE lecture aboard – and we had several conversations on that boat.   That’s where I really became envious of Roger.   It’s really where I got to see how in love he was with his Chaz.   Roger was healthy in those days…  as was I.   I’ll never forget walking with him, Jeff Dowd and some others on the Columbian Beach, or the time he and the dearly departed Dusty Cohl broke into my stateroom as we were going through the Panama Canal – due to a rumor that I was dead that Jeff “The Dude” Dowd had started.   Instead, they found me in boxers, drinking a mixed drink, while reading the script for something I can’t remember now.  I remember I was listening to Basil Poledouris’ HUNT FOR RED OCTOBER score.

I last saw Roger Ebert at the premiere of COMIC CON: EPISODE IV: A FAN’S HOPE.   I was posing for pictures with a giant Raydeen, when Patricia pointed at the poster for the film – and Roger was pointing at my name on the poster to Chaz and giving her a Thumb’s Up! And I shouted, “ROG!” and he looked at me, his eyes lighting up and Patricia and I chatted for a bit.   Roger let Chaz do the talking, but he wrote up the exchange on his blog – and was exceedingly sweet.

I owe Roger so much.   He taught me how to use a teleprompter in a fashion that doesn’t make it seem like you’re reading.   He encouraged me to write about the older films, because so few do and I had an obvious passion for it.

I was by no means a close associate of Roger’s, but to me.   He was everything.   Think of what it was like – he picked me out of the internet to be a different voice on his show.   He brought me back a few times.   And while there were times that we butted heads and disagreed…  I cherished it.   I got to argue & discuss with Roger Ebert about films.   But when we were talking about MIGHTY PEKING MAN and Roger brought up INFRA MAN – and I full on geeked out on that show – Roger’s face lit up and after that take, Roger was the sweetest he ever was to me.   We talked about INFRA MAN for a good long time.

He was amused by love for the Ritz Brothers and Bowery Boys.   Telling me that he was envious of our generation’s ability to have so much of film history so readily accessible.   We both believe that the younger generations, the folks that have the ability to really fully explore entire director’s careers and every film of an actor or actress – that we were upon a golden age of film love.

They were very hopeful conversations.   We were both happy guys.   When all the various problems started hitting Roger – I was starting to have many of my own.   The way he handled his issues, being public about them.   Not hiding from public view, but continuing to love film with everything he had.   Yeah, I respect the hell out of it.   But he also wanted me to stick to my rehab and get the hell out of this chair.   He wasn’t shy about personal issues.

Mostly, I loved the effect that Roger and Chaz had on Patricia when she met them.   She instantly loved Chaz.   You would too if you met her.   To say I wouldn’t be here talking about film without him…   I’m not sure.   Dad was pretty much determined to drown me in cinema from birth.   But it certainly made it easier to see a pudgy guy trading barbs with that thin guy and I really really hope that every one of those episodes hits online somewhere where they can exist for always.

I most loved their advocacy episodes where they took and highlighted a career, or films they wanted to be included in the Academy’s OSCARS.   Read Roger’s writing, it is something beautiful.   It can enrage and inspire.   And every single word, he believed.   In those reviews he teaches you about life, art and the thoughts he had about it all.   Roger Ebert had a beautiful life and he lived it spectacularly.

To be the sort of person that always gives a leg up, to encourage, instead of discouraging.   Roger was an enthusiastic advocate for that which I love so dear, FILM.  To watch it, to make it, to write about it, to exhibit it and to celebrate it.   He was what was best about those of us that choose to spend our lives in a darkened theater with our fellow weirdos and tell the world about the dreams we saw projected there.

I’ve read Roger Ebert my entire life.   I’ve never known a release day that didn’t have his reviews.   In High School I bought his paper to read his reviews and that other paper for Siskel’s reviews.   After getting to know Roger on his show, I could begin to feel like I could anticipate Roger’s take on movies.  I just hate that I won’t get many more of those.   Jim Emerson who ran Roger’s site with him, says there’s a few more, with the last being Terrence Malick’s TO THE WONDER.   As much as I appreciate Chaz, I really do want to acknowledge Jim Emerson for helping keep Roger communicating with all of us over the past decade and more.

That Roger gave TO THE WONDER three and a half stars, well that tells me all I need to know.   Malick has another Wonder and Roger was first, yet again!  I think I’m gonna watch CITIZEN KANE tonight. 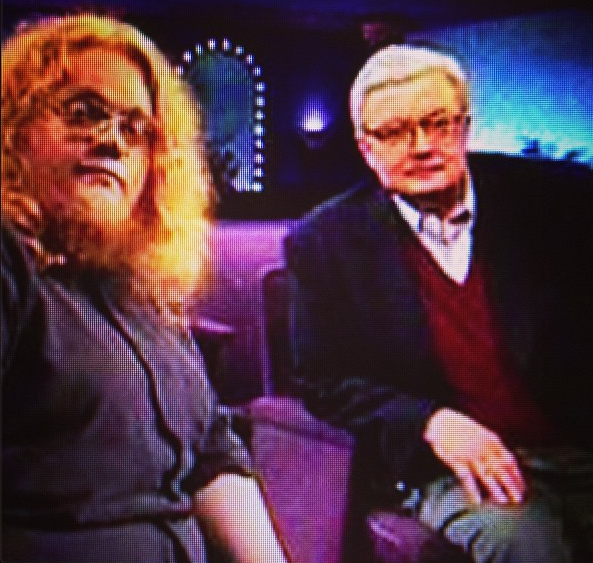