AICN COMICS Q&@: Russ Sheath talks to writer/artist Stephen Mooney and brings you a preview of his new book HALF PAST DANGER!


@’s by HALF PAST DANGER Writer/Artist
Stephen Mooney!!! 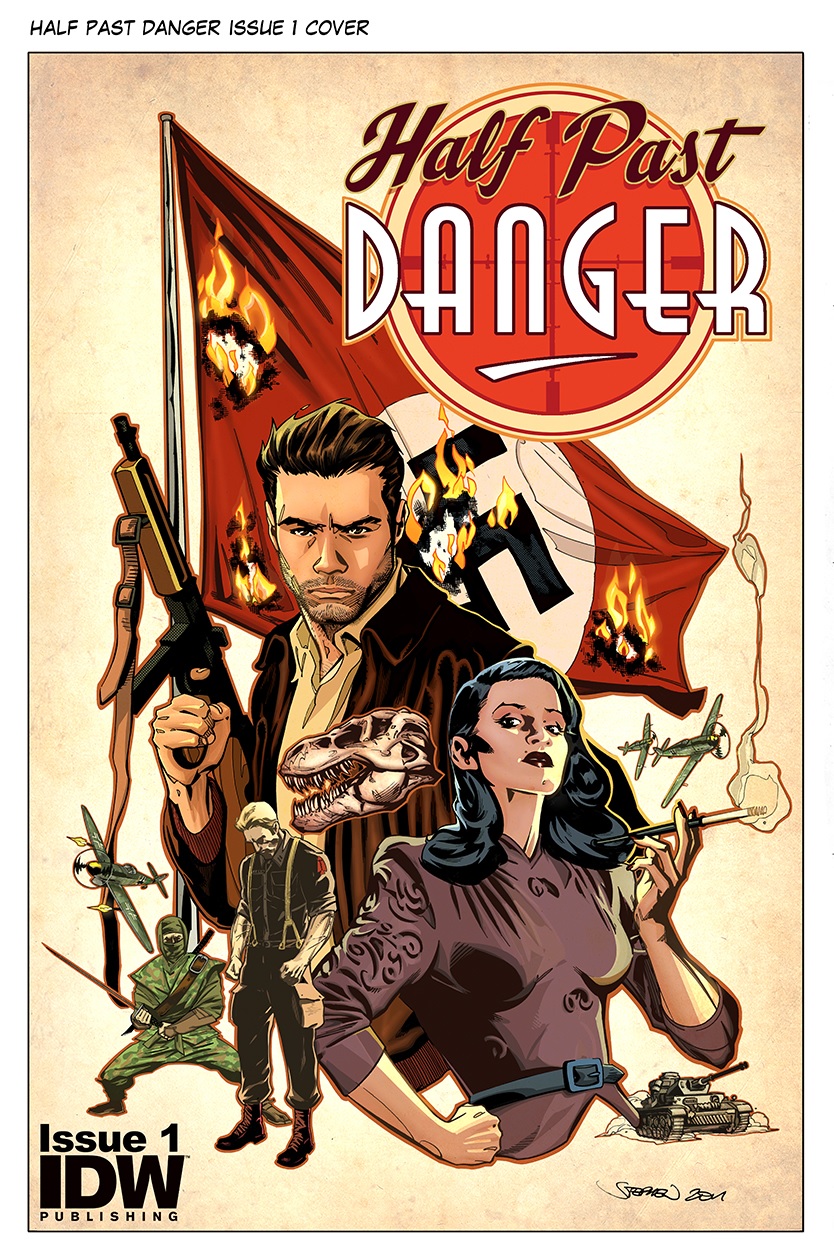 Russ Sheath here. HALF PAST DANGER is outstanding new comic book coming from writer / artist Stephen Mooney and IDW Publishing this May.

I saw a single image from HALF PAST DANGER several months ago and I just had to find out more. Stephen Mooney is an Irish artist and creator who had previously lent his talents to books such as TEEN WOLF, ANGEL and THE A-TEAM and I met up with Stephen to talk about HALF PAST DANGER and to bring you a preview of the book. 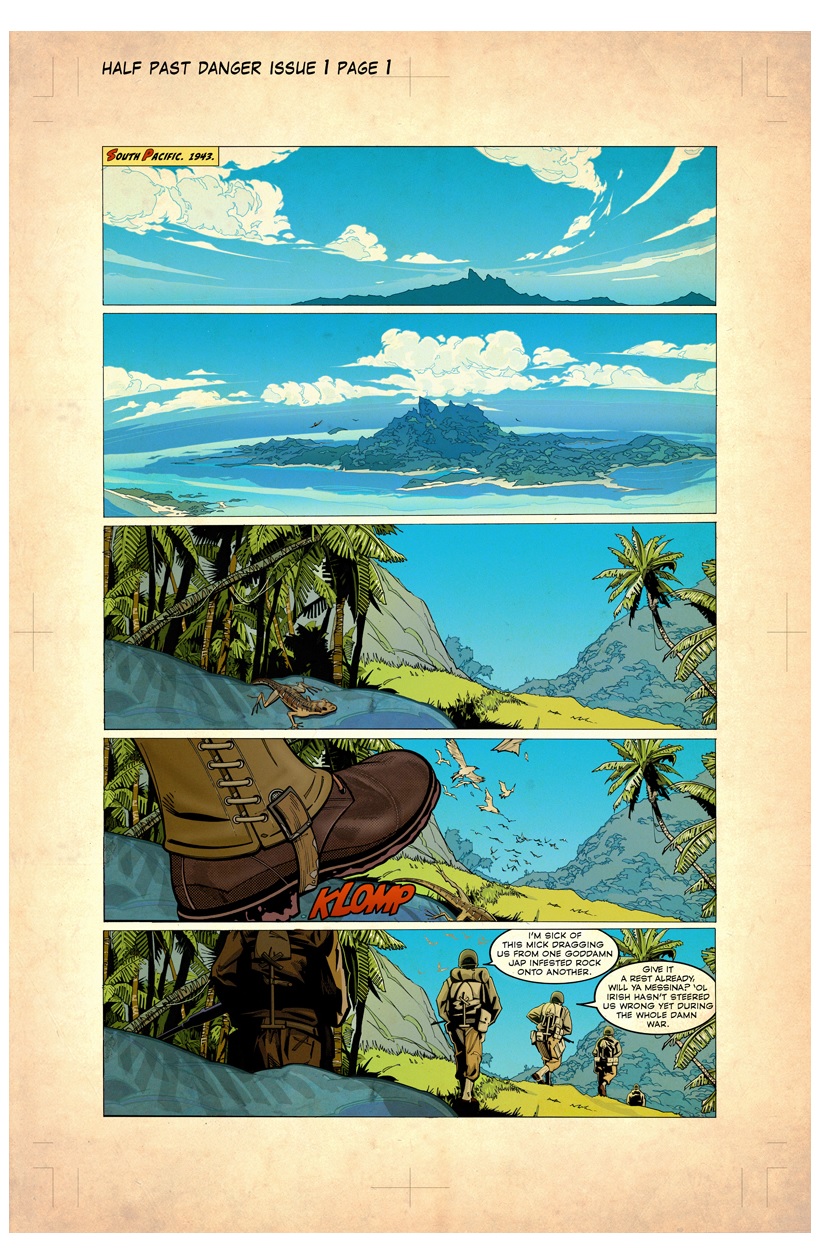 RUSS SHEATH (RS): Stephen, thanks for talking to AICN. Tell us about HALF PAST DANGER?

STEPHEN MOONEY (SM): It's a WWII story first and foremost and is about an , Irishman named Tommy Flynn. Tommy’s friends call him Irish and he is one of three full blooded Irish fellas fighting for the Americans in the war. He's frustrated by Ireland's neutrality so he signs up and is on tour on a nameless Pacific island where he and his squad are on recon and the rest of the story is about my own spin on what happens from there. 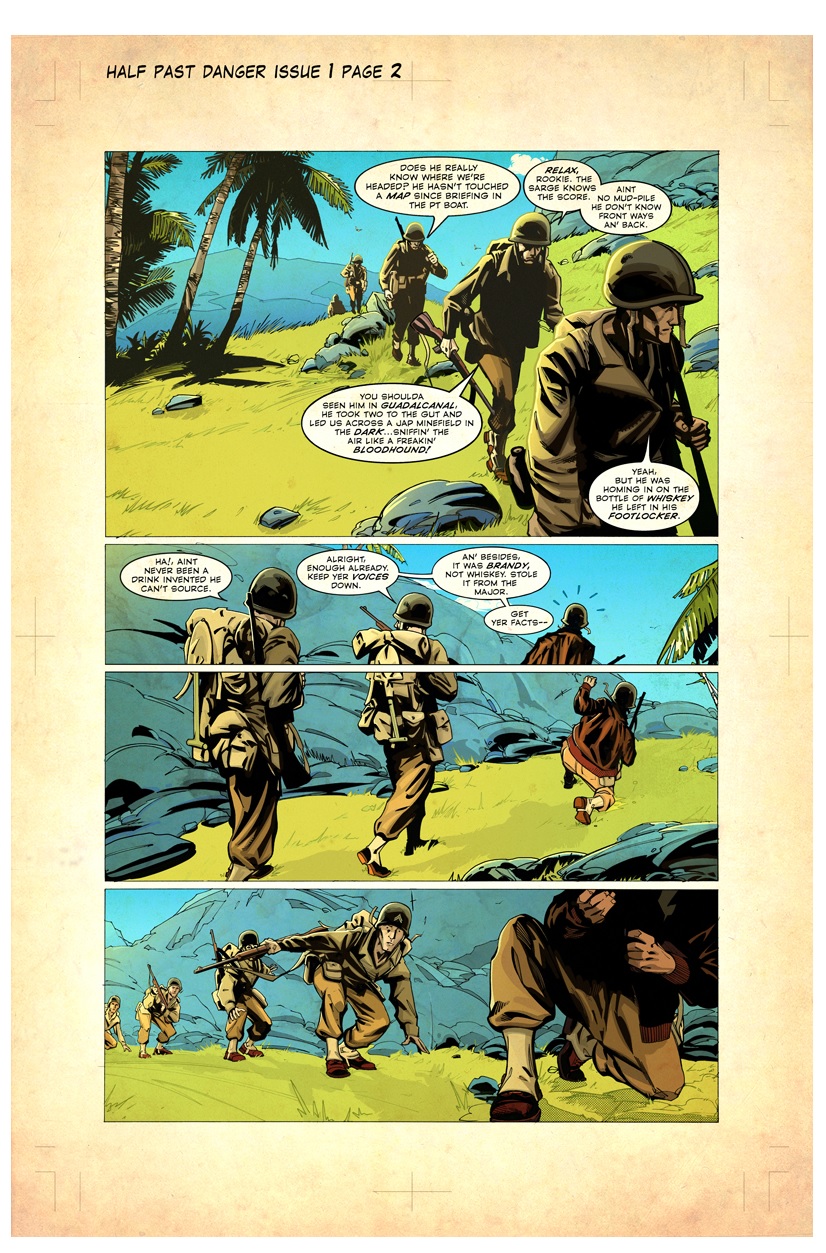 What happens to Irish and his squad is not good! It's the summer of 1943 and something catastrophic happens to his squad and because Irish has knowledge that nobody else has certain people recruit him to use that knowledge and it goes from there, I don't want to give away exactly what happens. We have mysterious femme Fatale MI6 agents and ninjas plus, I don't know if there are any better bad guys than Nazi's in history other than perhaps bad guys dinosaurs such as T-Rex and Velociraptors.

RS: Half Past Danger is certainly unique but it also draws some influences from a range of sources. Can you tell us about those? 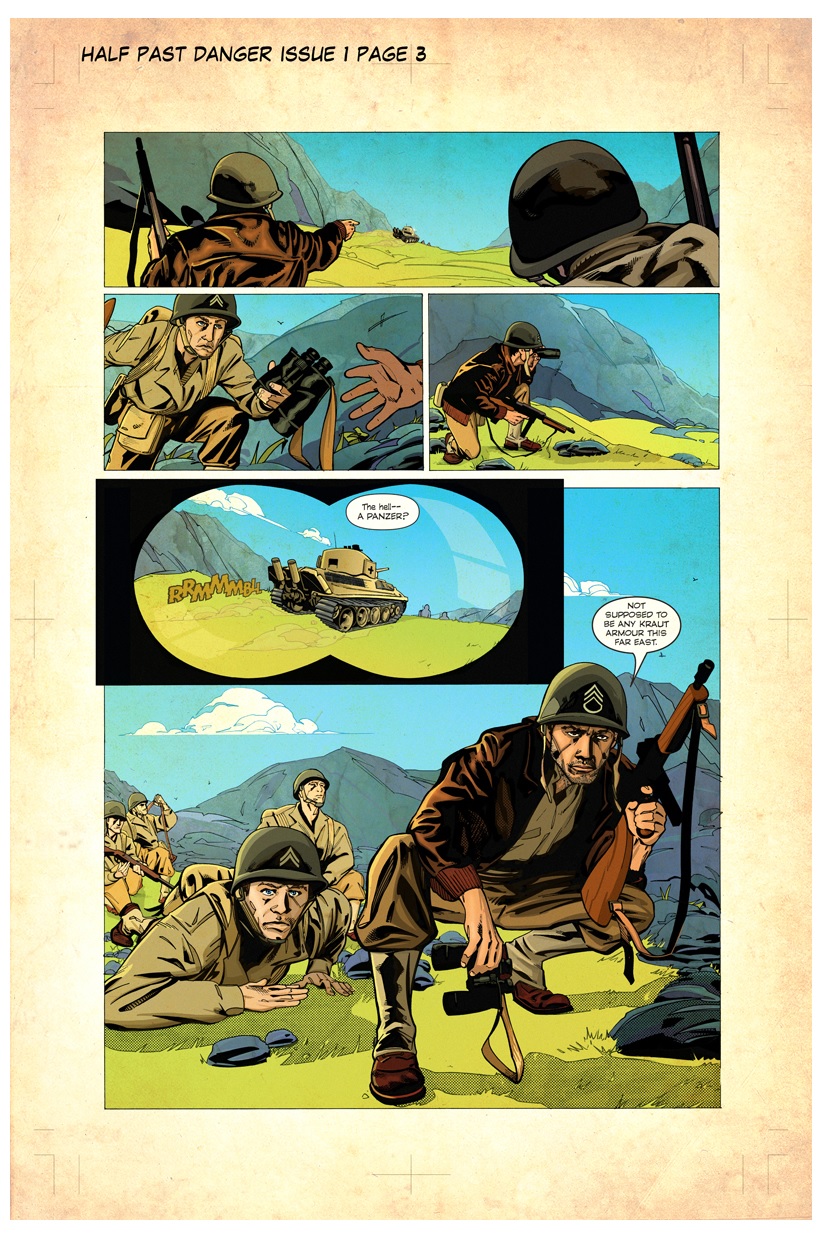 SM: All the guys like Dave Stevens with the Rocketeer and Mark Schulz with Xenozoic Tales are big influences as is Adam Hughes. I don't know anyone who isn't a fan of his.

All of the Wildstorm guys in the formative years especially Jim Lee, Whilce Portacio and Marc Silvestri and then later on guys like Travis Charest and J. Scott Campbell, I aspire to be like that and hopefully, one day I might be able to consider myself amongst the pantheon of those guys.

RS: You have an all star cast lined up to provide covers for Half Past Danger. 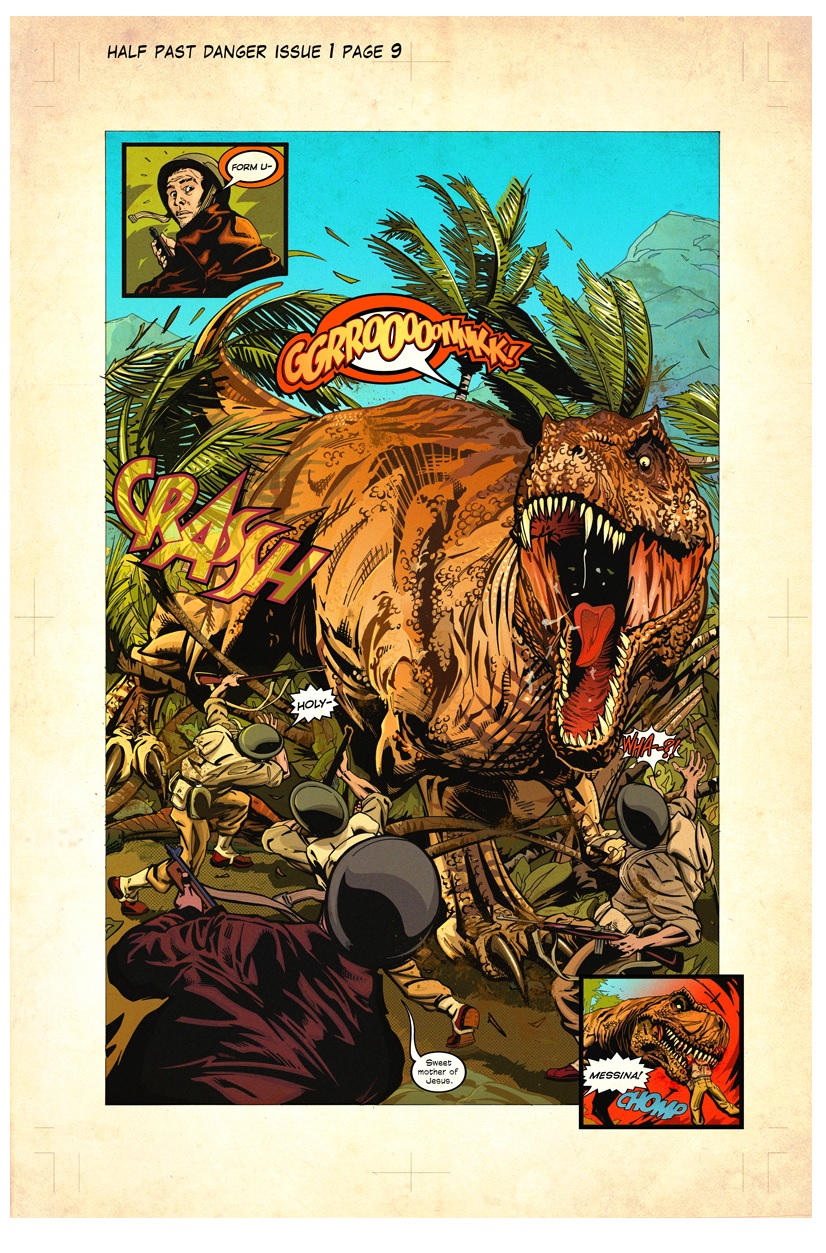 SM: The first issue has covers from Tommy Lee Edwards, as well as one of best mates from back in Ireland, Declan Shalvey. Declan is a Marvel artist and works on VENOM and he's done a cover for issue 2. It's very weird that these great artists are drawing my characters.

RS: Tell us more about the supporting cast in the book?

SM: There are four main characters one English, one Irish, one is Japanese and the other is Irish. My favorite is probably the English woman Elizabeth Huntington-Moss, she's definitely my favorite to draw. She's got that lovely 40's hourglass figure going on and any red blooded male will be able to see where I'm coming from. John, the American Marine Captain is a straight arrow and is brilliant to write and to drawn. He's very much my Steve Rogers or Doc Savage and while he does change from that he certainly starts out that way. 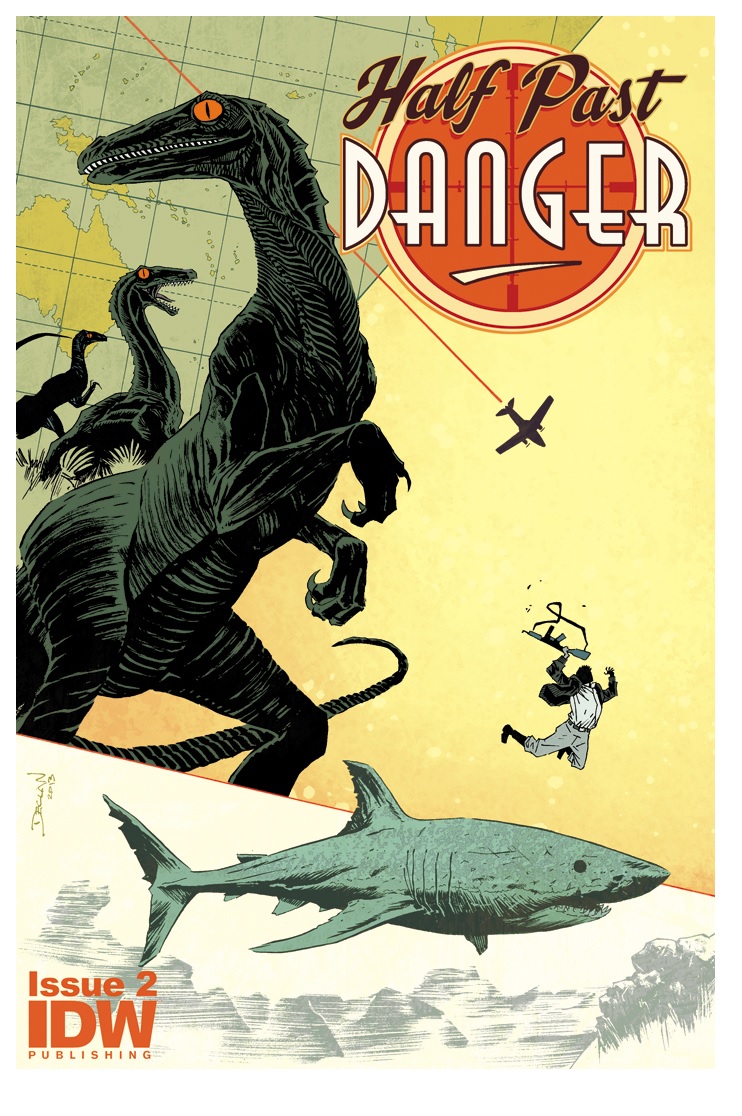 RS: Tell us about putting the book together. Has it been a long road to get to the point where the book is available to order?

SM: I did the first issue and it took me almost four months because I was doing literally everything. I asked a good friend of mine called Jordie Bellaire who is a Marvel and DC colorist who also did all the Rocketeer books for IDW which look gorgeous. Jordie colored the Rocketeer with these golden matinee hues where everything has that softness to it like a Sunday afternoon film you saw as a kid. So, Jordie’s coloring the book from issue 2 and it looks even better. I'm confident that if people try it they will really like it and having all these people onboard with the covers and with Jordie coloring is a real help. 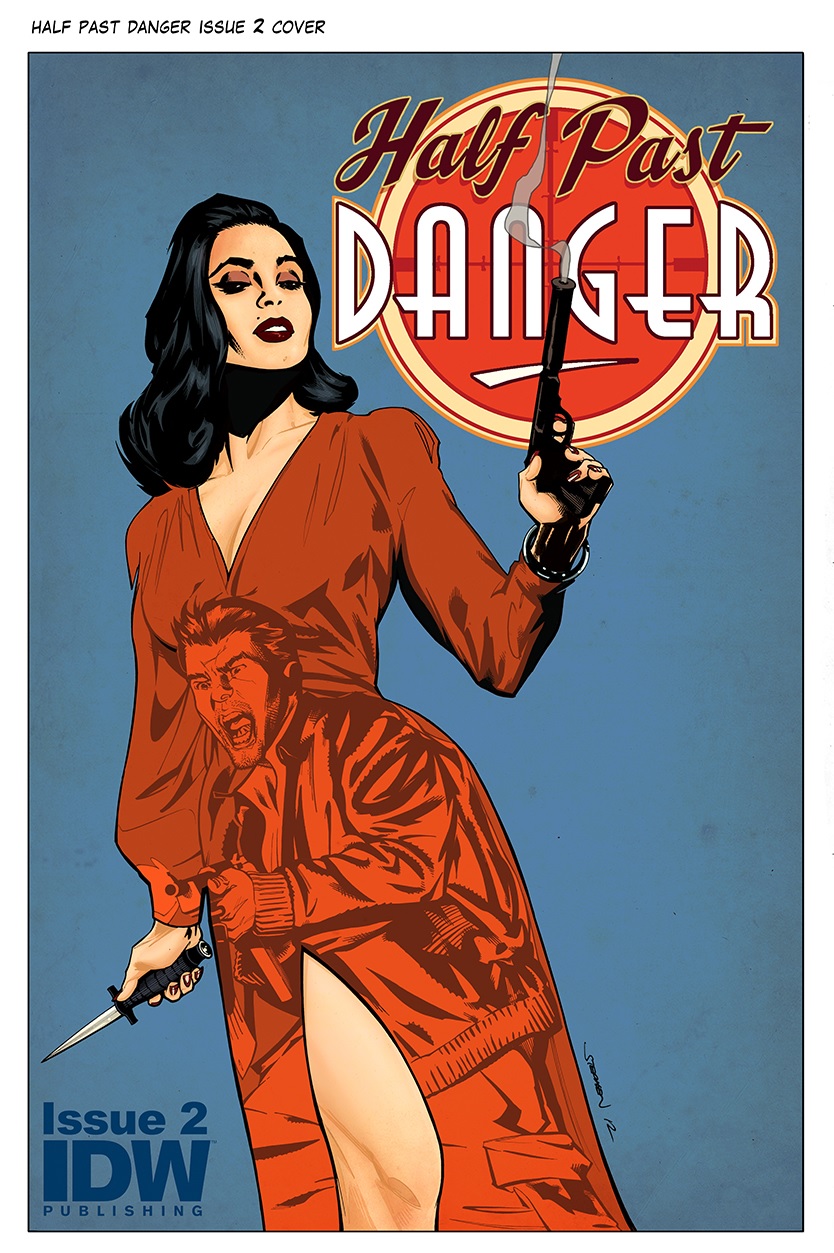 RS: The book is coming out from IDW, tell us about that?

SM: I'm really glad that IDW are doing it and their production values are really strong. You've seen the artist edition books? They are put together incredibly well. There are the Parker books by Darwyn Cooke, and Scott Dunbier is head of special projects there and all of their stuff looks incredible and I really trust the lads there. 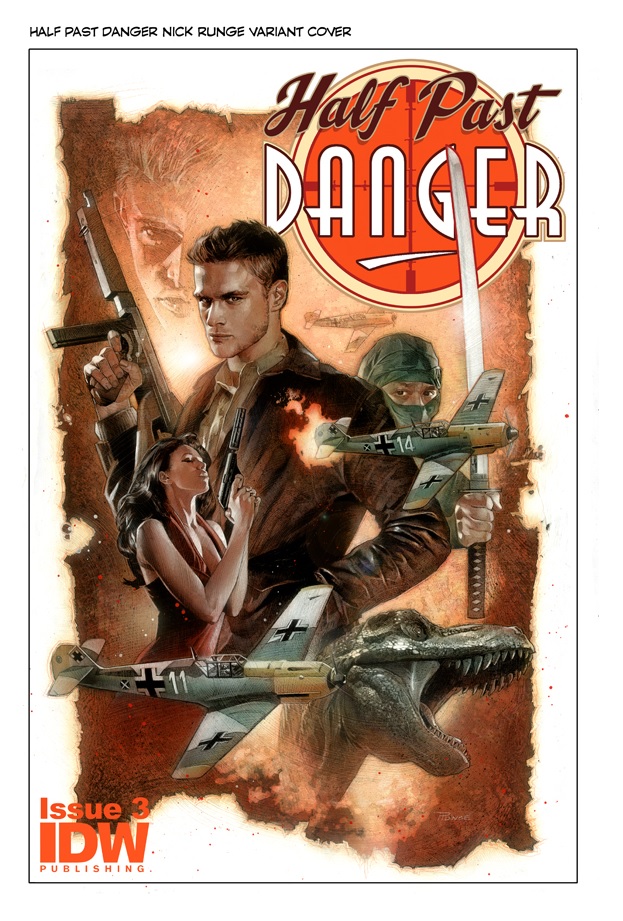 RS: Tell us about your plans for the story following the first series?

SM: The book starts in May and it ships monthly. The first series is 6 issues and there's an idea for a sequel which I guess depends on sales and numbers. At the moment I'd be happy to do this forever and I certainly have a cool idea for a sequel if the boys at IDW will let me. I know that anyone of my generation will be excited to see it and when you look at the shelves you don't see a lot of these kind of pulp titles any more. 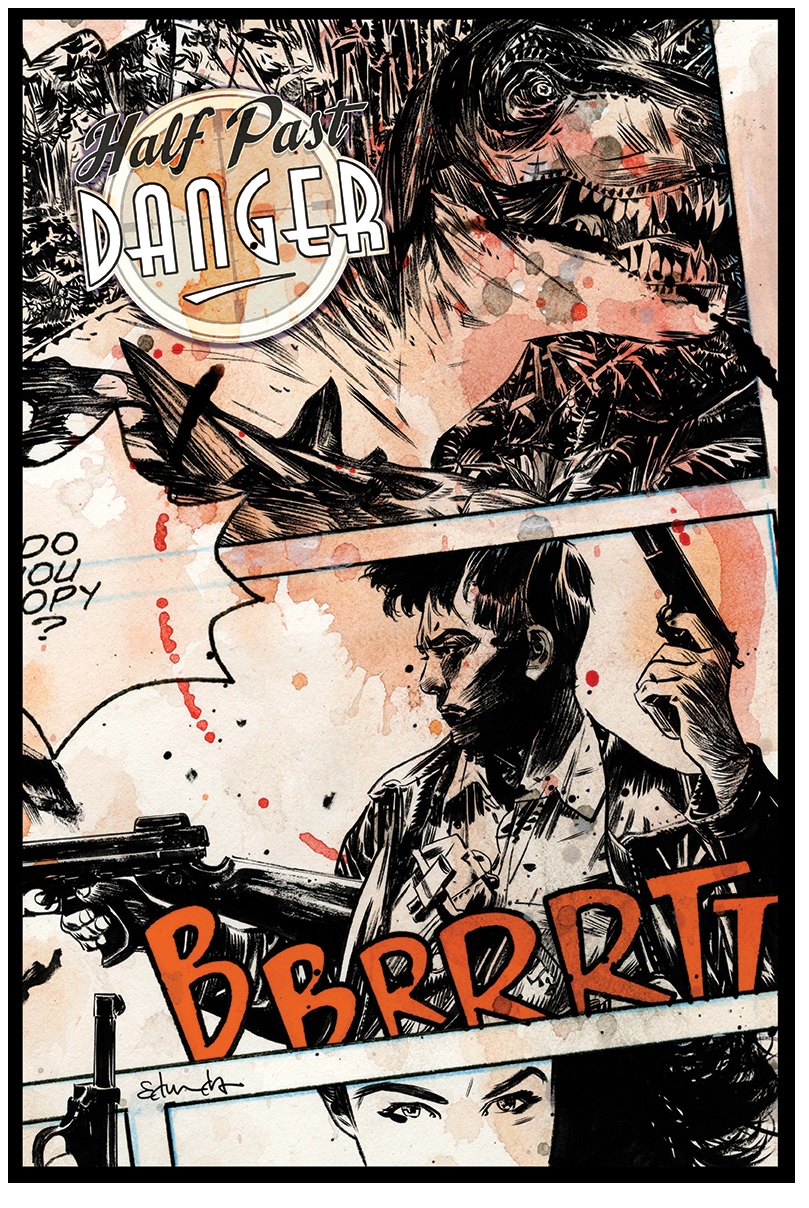 RS: Check out HALF PAST DANGER’s website here for updates, sneak peeks and order codes and look for it in comic shops this May. Follow Stephen Mooney on Twitter @stephen_mooney