Update! Lindelof Speaks! You're Not Going To Believe What's Holding Up The PROMETHEUS Sequel... 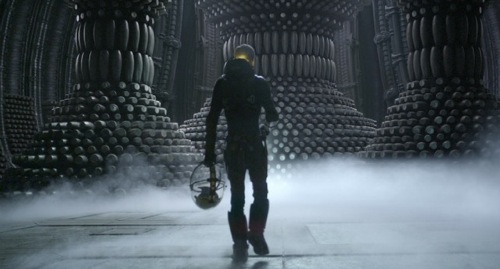 If you remove movie geek discontent from the equation, there is every reason for Fox to move forward on a sequel to PROMETHEUS. Ridley Scott's R-rated sci-fi flick raked in $403 million worldwide, $276 million of which was earned internationally. For a film that reportedly cost $130 million, that's a decent haul. It also received mostly good reviews, and received an okay Cinemascore of "B". The question isn't whether to proceed, but how. And that's the issue that's kinda kicking the respective asses of Fox and Ridley Scott at the moment.

According to Bloody-Disgusting, both studio and director are "freaking out" over their inability to hit upon a workable premise for the second film in the proposed trilogy. I'm told "freaking out" is something of an overstatement, but it's true that Fox and Scott have been hearing pitches from numerous screenwriters, and there's no real direction home because Damon Lindelof - the fella who expanded Jon Spaihts's original, one-and-done PROMETHEUS screenplay - sort of left them without one.

Bloody-Disgusting places the blame squarely on Lindelof's shoulders, which isn't entirely fair. He didn't hatch the idea for a trilogy; that was something the studio and Scott were interested in all along. Yes, it would've been awesome had PROMETHEUS been a one-off lead-in to ALIEN, but when you're mucking about with franchises, there's no such thing as closing the circle - at least, not in one film. Spaihts addressed this in an interview with Empire:

“I did have a plan for multiple films and the conversations I had with Ridley was about a new franchise, from the beginning. We talked about a possible trilogy, or a duology, but more often as a trilogy. And I did have pretty broad notions as to how we were going to get from this world to the original Alien – the baton pass, closing the circle, if you will. So yes, I did have plans for two other films. I came up with an even more twisted sequence than the Medpod, but I cannot tell you what happens…

“My vision of the trilogy would have involved the arrival of the Yutani Company and a couple of other major plays around the Engineers themselves: the revelation of an additional grand Engineer design, and the possibility of seeking an Engineer homeworld. That shot of the ship flying at the end offers a lot of creative ways to play with this. But it feels like it brackets you into the search for the Engineer homeworld and home civilisation. That’s an interesting challenge.”

By setting PROMETHEUS on LV-223 rather than LV-426, the planet visited by the Nostromo in ALIEN, Scott and Lindelof have spun this series away from ALIEN. It's now about the Engineers, who wound up being wildly uninteresting dicks at the end of PROMETHEUS. Why is Elizabeth Shaw still searching for answers, (and, on a practical note, what is she going to eat on the Engineer's ship along the way)? That's what some crafty screenwriter's got to figure out. If not, PROMETHEUS may be a one-off after all.

UPDATE: Lindelof has responded at length to the controversy via Slashfilm. Below is an excerpt, but you should head over there to read his entire email.

During the creative process of Prometheus, all involved (that includes Fox and Ridley) had a strong desire for this film to launch off in its own way so that by the end, it would not connect directly to the original ALIEN, but instead run parallel to it. This is something that I talked about many, many times in the press burst around the release of the movie. As you probably remember, there was a lot of interest as to whether Prometheus was a “prequel” — the answer was, “Yes. Sort of. But if there was a sequel to Prometheus, it would not be ALIEN.”

Taking the strong foundation that Jon Spaihts had already written, I worked on the script to this end — and yes, during that process, Ridley did occasionally riff on what he felt might happen next as Shaw and David’s Head ventured off of LV-223 in search of wherever The Engineers had come from.