Nordling Says OLYMPUS HAS FALLEN And Can't Get Up! 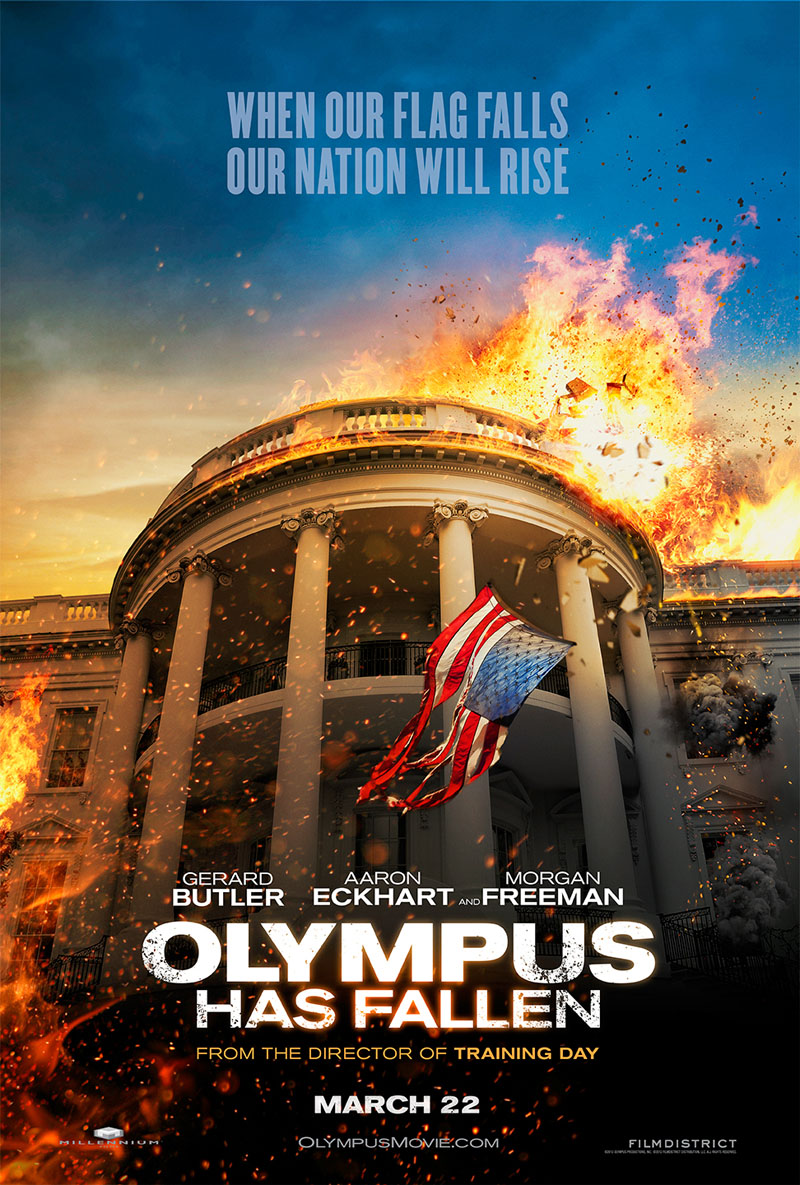 Before people scream bloody murder about the headline, I'll have you know that it took me at least twenty minutes to come up with that.  So don't let it be said that wit is dead.

OLYMPUS HAS FALLEN is dumb.  Now, there are different kinds of dumb, especially when it comes to action films.  Sometimes dumb can be enjoyable.  I'm a huge fan of XXX, the Vin Diesel actioner that has him out-snowboarding an avalanche and says lines like "Start thinking Playstation!  Blow shit up!"  But that's a movie that knows how dumb it is.  Action movies that are aware of what they are get a lot of points from me.  THE FAST AND FURIOUS franchise practically corners the market on how self-aware it is, and that's what makes those movies so fun.  They call their target, and hit it more times than they don't.  And these days, that's enough, most of the time.

Unfortunately, OLYMPUS HAS FALLEN isn't the kind of dumb that fans can enjoy.  A majority of reviews out there compare the movie to DIE HARD.  Can it be said now that DIE HARD is probably the last truly great American action film?  I'm sure if I think on it for a bit I'll come up with some movies released since then that come close, but honestly, all the best actioners are being made overseas right now.  Here, we simply cut and paste the plots and make something out of the pieces.  I know that sounds harsh, but let's be honest about it and move on from it.  I love DIE HARD like few other movies.  But I think it's time to move on.

Sadly for Antoine Fuqua, the script by Creighton Rothenburger and Katrin Benedikt is purely paint-by-numbers, no matter how much he tries to color outside the lines.  Mike Banning (Gerard Butler) was President Ben Asher's (Aaron Eckhart) personal Secret Service agent, and the two were close friends.  Then, one night, Banning is unable to prevent the death of Asher's wife (Ashley Judd) during a freak car accident.  18 months later, Banning's riding a desk at Treasury, while Asher is trying to cope with the loss of his wife, raising his young son Connor (Finley Jacobsen) alone, and trying to ease tensions on the North Korea/South Korea border with a visit from South Korea's prime minister.

But before you can say RED DAWN, a North Korean terrorist group led by Kang (Rick Yune) infiltrates and seizes control of the White House, taking the President, the Vice President, and most of his cabinet hostage.  The onus of leadership falls onto Speaker of the House Trumbull (Morgan Freeman), and Kang uses the situation to negotiate the withdrawal of all American forces from South Korea as well as the naval fleets surrounding that country.  But Kang, with the assistance of rogue Secret Service agent Forbes (Dylan McDermott), has something more sinister in mind for the United States.  And only Banning, the lone agent left in the White House, can stop him.

This sounds all too familiar, of course, and it doesn't help that the script has characters doing idiotic things that people in real life would never think to do.  But then we wouldn't have a movie if they behaved like real people.  Ordinarily I give a character doing something stupid at least one pass, but everyone (other than Benning) does something simply beyond reason.  Those expecting Morgan Freeman to bring his special Freemanness to his role may be in for a shock here - Trumbull is something of a weak-willed Speaker of the House, and he does things completely out of character for someone in monentary charge of the free world.  Eckhart's Asher isn't much better, making dumb decisions as he's held hostage in an underground bunker, straining all credulity.  It's difficult to believe that these people in positions of power would turn everything over at the first signs of trouble, but these characters do it several times in the movie.  The scriptwriters have forgotten their Spock - "The needs of the many outweigh the needs of the few, or the one."  Had they remembered that, perhaps the story wouldn't have been quite so pedestrian.

Antoine Fuqua has a decent track record of shooting action, so he manages to keep the film interesting despite the idiocy of the script.  There's not a lot of shaky-cam here, thank goodness, and the setpieces are well done - the taking of the White House is pretty visually stunning and has a nice build to it.  Gerard Butler tries hard to be the jovial badass, and he mostly succeeds.  When the other characters do and say stupid things, Benning is normally the man to fix their mistakes.  But again, I cannot fully describe how moronic this script gets.  The movie paints itself into corners but simply blows up those corners when it needs to get out of them.  McDermott's Forbes is probably the worst written traitor to his country character in movie history, with absolutely no motivation except some vague anger at Asher that isn't even explored in any kind of normal fashion.  I laughed out loud at much of his dialogue, and I'm certain that wasn't what the writers intended.  The endgame, which I won't spoil but damn near should, makes no sense when given even the most cursory of thoughts.  It's insulting to any thinking audience member.

OLYMPUS HAS FALLEN will serve a lot of red meat for some audiences - I had to laugh when there was a slow motion shot of the tattered American flag falling off the White House roof - but the movie never met a cliche it didn't dry-hump in a back alley.  Fuqua's done much better work than this, and with better scripts.  TRAINING DAY is still a wonderfully written and acted cop thriller.  But OLYMPUS HAS FALLEN can't even be as compelling as DIE HARD knock-off CLIFFHANGER, which as silly as it was at least had proper character motivation.  There's another White-House-under-attack movie coming down the pipe, directed by Roland Emmerich, and I expect that movie to be much smarter and more engaging than OLYMPUS HAS FALLEN.  At this point it's just simple math.  That's just how stupid OLYMPUS HAS FALLEN is.