If You've Been Waiting For A Good DIE HARD Movie To Arrive, The Kidd Says OLYMPUS HAS FALLEN Does The Trick 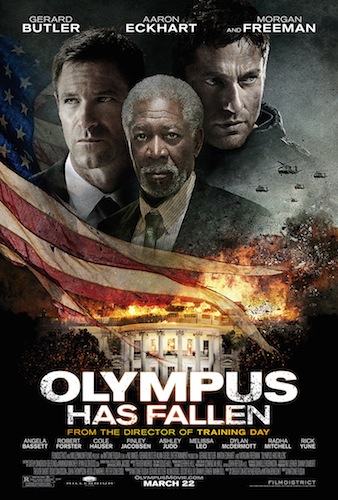 It’s nice to know that all these years someone is still capable of making a solid DIE HARD movie. It certainly isn’t Bruce Willis and whatever poor unfortunate director is being brought along for the ride to make John McClane into some type of aging superhero. As far as I’m concerned, there hasn’t been a DIE HARD film on the scene that felt like DIE HARD since 1990, a sad state of affairs for the franchise when you consider they just put out another horrible sequel earlier this year (read my review of A GOOD DAY TO DIE HARD here). But Antoine Fuqua clearly watched the earlier DIE HARD movies, took in a bunch of those other “DIE HARD-on-a-_______” films that did their best to capitalize on the formula, and made plenty of notes as to what works and what doesn’t, because he’s turned out a really good action film with OLYMPUS HAS FALLEN, which, in spots, absolutely reeks of John McClane’s takedown of Hans Gruber at Nakatomi Plaza.

Fuqua’s picture can easily be classified as DIE HARD at the White House, and it’s a rather simple premise - a North Korean paramilitary group led by the ruthless Kang Yeonsak (Rick Yune, who is all business in the bad guy role) is able to infiltrate and overtake 1600 Pennsylvania Avenue, taking the President (played by Aaron Eckhart), Vice President (Phil Austin), Secretary of Defense (Melissa Leo) and other various staff hostage, leaving Morgan Freeman’s Speaker of the House Allan Trumbell as the Acting Commander-in-Chief to make the tough decisions with both the President’s safety, the country’s national security and the threat of a greater global problem hanging in the balance. Kang’s demands are for the U.S. to pull all of their troops out of the DMZ that separates North and South Korea and withdraw the Seventh Fleet from the region as well, allowing North Korea a clear path to wipe out their neighbors to the south, enhancing the threat of the country to the world over. But with nearly every Secret Service agent wiped out by the siege and the Armed Forces exactly two minutes too late to stop the capture of the White House, the U.S. and the world looks to be down to their last hope - Gerard Butler. Butler plays Mike Banning, former Special Forces who took his training to be one of the top men on the President’s Secret Service detail and a good friend of his family at one point in time. After a tragic loss, he was reassigned though, putting him in the position to be the last man standing to try to stop these terrorists from completing their mission. His enemies may be highly trained and well organized, but so is he, and he’ll be damned if he’s not going to do everything in his power to protect the United States and save the President. 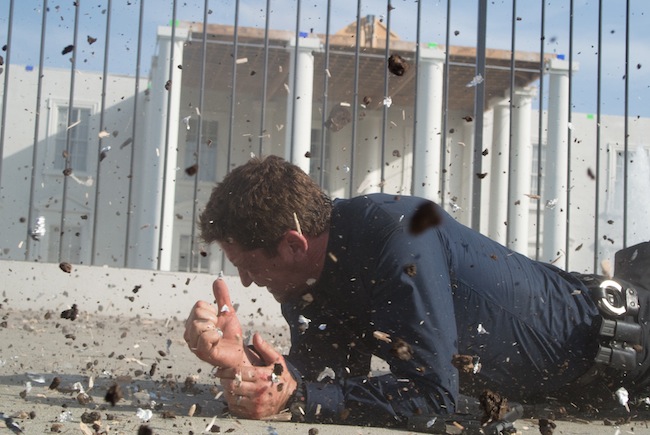 Fuqua pulls no punches in making sure OLYMPUS HAS FALLEN is heavy on the action. The 20-minute attack on the White House is sure to raise some scary memories of 9/11 for some, and, even though a couple of the effects are a little dicey, particularly those involving the Washington Monument, it’s the war-like and realistic violence that really help set the stakes for the rest of the film. It’s ultra-violent and intense as an attempted breach of such a secure location should be, and it lets you know right away that this isn’t going to be some PG-13 action cartoon where people get shot don’t bleed and you never really get a sense of the carnage accumulating. Fuqua isn’t shy about showing the body count rising, making you feel how important Banning is in putting a stop to the escalating threat. When it comes to hand-to-hand combat in spots, Fuqua seems to fall into the same trap as most filmmakers do in dealing with action these days, which is to cut the sequence heavily, which makes it a bit confusing to see who is throwing what punch at who. But as far as staging firefights or aerial assaults, it’s hard not to get pulled right into the excitement of watching them unfold, with your adrenaline feeding your connection with the film. This is good versus evil, the United States against those who wish to harm us, and when you have a villain willing to engage in some rather harsh tactics in order to get what he wants, it’s easy to find yourself actively cheering for the hero.

This is the type of movie Gerard Butler should be doing time and time again. After 300, he got trapped in the realm of romantic comedies, and it wasn’t pretty at all. However, he’s a guy with an imposing build and a charismatic personality, and with the lack of credible action stars on the scene these days (other than Statham), there is a void to be filled, and as he did with Zack Snyder’s adaptation of Frank Miller’s graphic novel, Butler once again proves he is more than up to the task of pulling it off, while, at the same time, giving you a reason to have fun with what you’re watching. He’s not trying to be John McClane here, but there are elements to that character being borrowed that help make Banning work as well as he does. 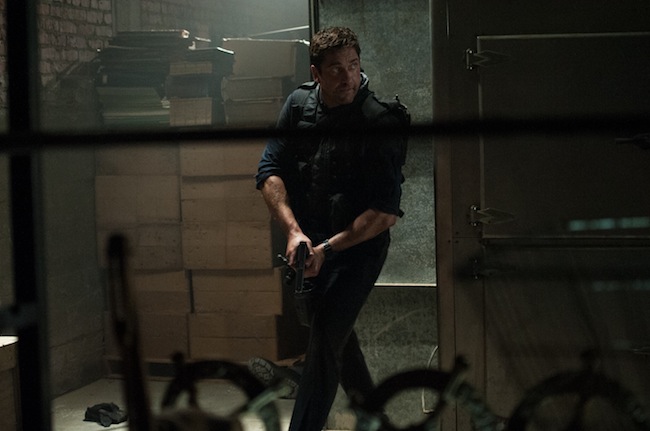 Screenwriters Creighton Rothenberger and Katrin Benedikt studied the hell out of DIE HARD in putting together this script, and especially if you know John McTiernan’s film, you will recognize beats lifted almost directly from it. And yet they never feel like a rip-off. They have the aura of homage to a film used such moments the right way, because they are, in turn, being used well here. There is a Bill Clay moment that the second it happens, alarms go off in your head. There’s a similar situation to the Agents Johnson calling for a blind breach of Nakatomi Plaza against warnings of the guy inside. OLYMPUS HAS FALLEN feels like a missing DIE HARD movie of sorts, which may be the best compliment I could possibly pay it, as I’d much rather this one be slotted as a sequel in that franchise than the last three films that actually sport the DIE HARD name.

OLYMPUS HAS FALLEN really surprised the hell out of me. I wasn’t expecting much, focusing more on the other White House under attack movie coming later this year, but with a worthy bad guy, an engaging hero and Eckhart providing a likable President you actually want to see rescued, OLYMPUS HAS FALLEN does plenty right to be saluted as an excellent action flick.