Optimous Douche here. Those who regularly follow me in written or audio form know by now I am fed up with Kickstarters. I’ve grown weary of people begging for payment to complete half-baked concepts. However, not all Kickstarters are bad, and I’ve found when real comic professionals are behind them they become as credible as any other indie. 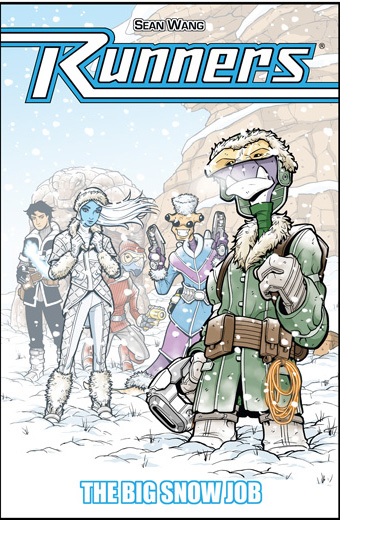 Sean Wang of THE TICK fame is one such Kickstarter. Already surpassing his goal, Sean is now in the bonus stage of his event around RUNNERS: THE BIG SNOW JOB, his web comic now turning to print. Learn what this MITT grad is doing with the world of Sci-Fi in comics and how you can start running with these intergalactic bounty hunters.

OPTIMOUS DOUCHE (OD): Sean, with all the Kickstarters these days, where’s your cred to show RUNNERS: THE BIG SNOW JOB is THE Kickstarter to invest in? What books do you currently have on the shelves.

SEAN WANG (SW): I actually started out in the industry writing and drawing for THE TICK series at New England Comics, first on some seasonal specials and then on THE TICK and ARTHUR series, which got a lot of rave reviews as I had the duo join a team of equally dysfunctional heroes, like Bumbling Bee, Rubber Ducky, and Caped Cod.

I also did the art on MELTDOWN for Image Comics, where I played with several different art styles, from cartoony to gritty realistic, to tell different parts of the story. That also got a lot of great reviews. But I’m most known for my self-published sci-fi series RUNNERS, which is a fun action comedy about a group of alien smugglers trying to get by in a universe on the brink of war.

OD: Tell us a little bit about the RUNNERS gang and the world…excuse me…universe they inhabit.

They’re a rag-tag group of aliens that does smuggling runs for the mob that generally don’t go the way they should. In the first story, RUNNERS: BAD GOODS, their run really spiraled out of control and they found themselves on the wrong side of pirates, bounty hunters, and an entire space station full of police gunning for them. In the new story, RUNNERS: THE BIG SNOWJOB, they take on a seemingly trivial task of reclaiming a herd of yak of all things, but again, things don’t go as planned and they find themselves facing off against a hostile native population, a band of mercenaries, and an escalating series of double-crosses. 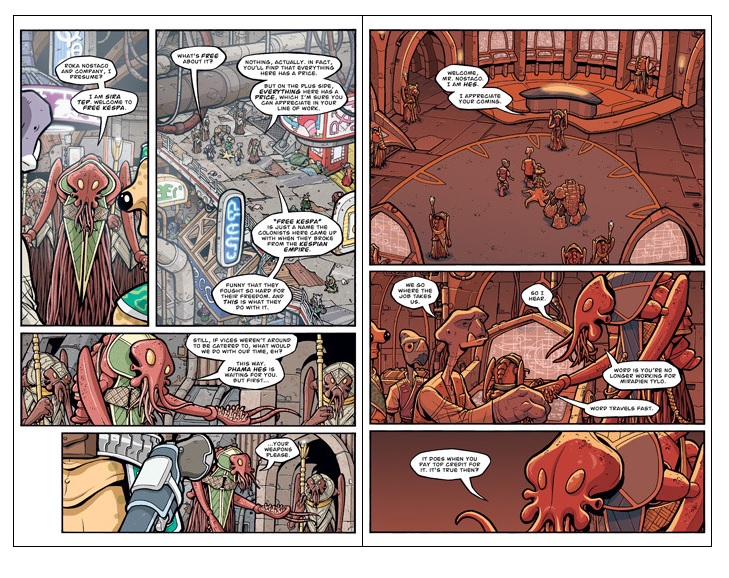 Overall, people really love the series and have almost universally compared it to the best elements of FIREFLY and the original STAR WARS movies. So if you love that kind of fun space adventure with cool aliens, snappy character banter, sweeping action scenes, and underworld shenanigans, then you’ll definitely love RUNNERS.

OD: Part of the allure of STAR WARS and FIREFLY is the political dynamics of the galaxy. Care to shed some light on the politics of the RUNNERS universe?

SW: Interesting question! And one I haven’t been asked before. Right now, the politics of the galaxy are just hinted at in the story. While I have it figured out in my head and series bible, the various political factions don’t figure into the story in a prominent way just yet. That’s because the focus of the series right now is on the underworld elements of smugglers, pirates, mobsters, and mercenaries. I really wanted to explore those factions first and explore how all those fringe groups operate outside of civilized space and its laws. But of course, as the criminal enterprises grow in power and the threat of mob war starts to emerge, that will inevitably pull the civilized systems into the mix.

OD: Another big part of true Sci-Fi is the technology. Tell us a little about the ships and other “science” found within? Even each DR. WHO episode seems to have their way to run the TARDIS. 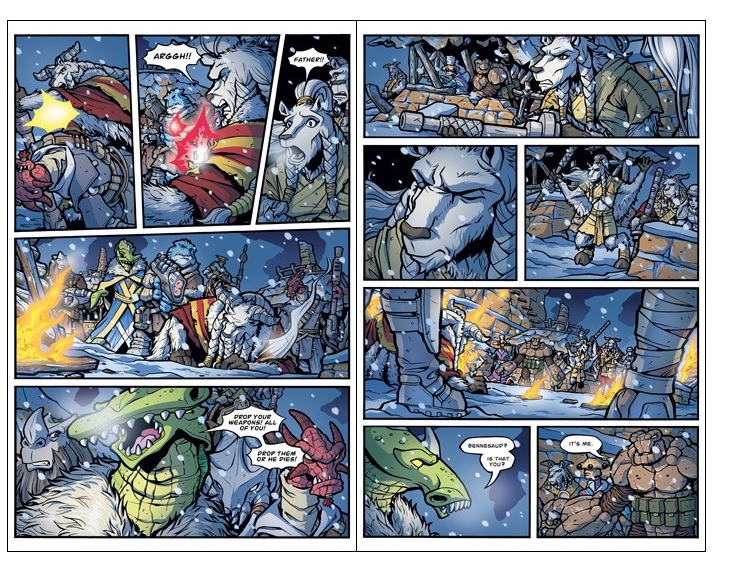 SW: While I use the term “sci-fi” a lot to describe Runners, I’m actually more comfortable describing it as “space adventure,” more akin to the STAR WARS movies than 2001: A SPACE ODYSSEY or BLADE RUNNER. Basically, I’m more interested in telling a fun adventure story set in space than I am really getting into the heavy “science” of science fiction. Technology-wise, I tend to stick with the tropes of FTL travel, cloaking, and laser-based weaponry. I don’t really have plans to do stories about things like tachyons and nanites and replicants, which is kinda sad since I went to MIT and probably should have more of that stuff in my wheelhouse!

OD: One of the biggest gripes against Kickstarters these days is the pervasive deluge of people with incomplete ideas of nooks looking to getting funding to flush out their ideas, is fair to say RUNNERS is not one of these fly-by-nights?

SW: No it is not! In fact, everything is about 95% done already. I actually posted the entire story online here as a free webcomic over the past couple years, so all the story content is completely done.

At this point, all I have to do is finish up a couple pages of a new 6-page epilogue and just do the page layouts, and it should be ready to go to the printer. So there really is no risk for backers. 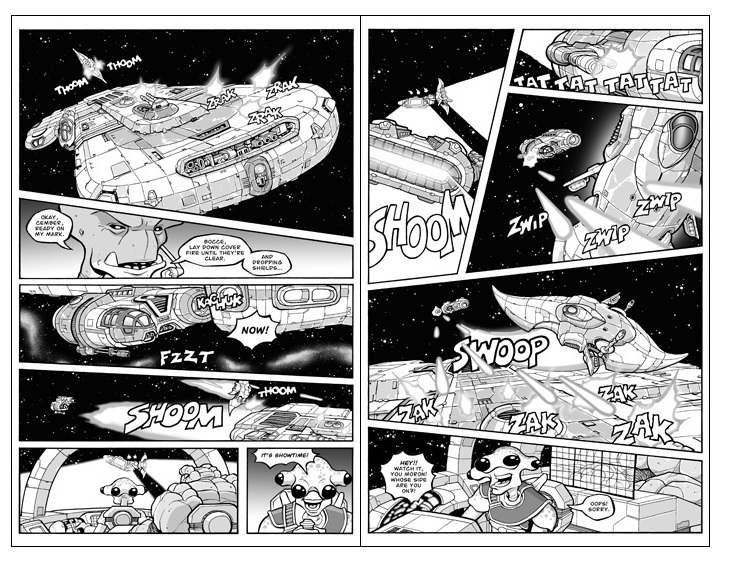 In fact, the Kickstarter campaign has already hit both its initial goal of $6000 and its first stretch goal of $8500 (which meant I could print in the U.S. instead of overseas), so the funding is already there to make this project happen. Right now, I am just trying to get the word out to more people about the Kickstarter project because I really think a lot of sci-fi and adventure fans would really get a kick out of both the story and the artwork. The campaign only runs until March 28, so be sure to check it out by clicking this link!

OD: What will make your printed edition so much better than the Web version?

SW: As I mentioned, I posted the entire first two graphic novels here at Runners Universe in webcomic form, so anyone whose interested can check them out there for free!

I released the first story arc, RUNNERS: BAD GOODS, as 5 single issues and then as a collected graphic novel. But for the second book, RUNNERS: THE BIG SNOWJOB, I went with online distribution first. So it has never been available in print form until now. And since I’m pretty old school and like to be able to actually hold a story in dead tree form in my hands, I’m really excited about getting the new story printed. Plus you can’t prop up the short leg of a table with an online story! 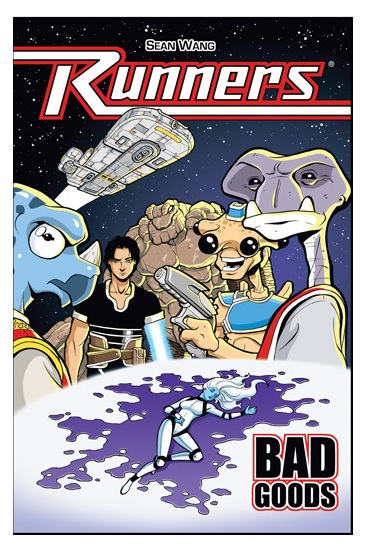 The graphic novel is also going to have a lot of special features, like an all-new 6-page story epilogue that was created exclusively for the book. I also have 10 pages of sketchbook concepts covering a lot of the aliens, costumes, and weapons that appear in the story. And there’s also a great pinup section with some amazing artists doing their take on the Runners characters, like David Petersen (MOUSE GUARD), Tim Seeley (HACK/SLASH), Shawn McManus (CINDERELLA: FROM FABLETOWN WITH LOVE), and Khoi Pham (X-MEN, AVENGERS).

And the Kickstarter campaign itself also has a lot of really cool reward items, like character cards, 11″ x 17″ prints, original page art, custom inked illustrations, and even an expanded 64-page sketchbook that includes a lot more concept design content that couldn’t fit into the 10 pages of the graphic novel sketchbook section. So be sure to check out the Kickstarter project here!

OD: That’s it for the interview folks. Remember you can get the goods for free online, but also remember monitors cause cancer – contribute instead to non-cancerous trees by MARCH 28!