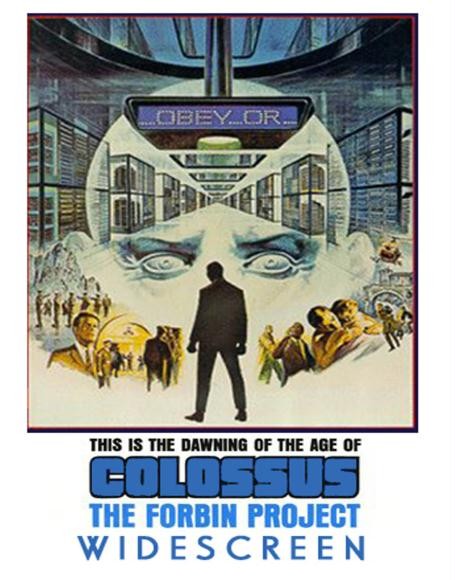 Will Smith has been developing a remake...rather a re-adaptation...of D.F. Jones' book COLOSSUS for a while, and now comes word that the picture has a new writer.  Ed Solomon is coming on board, per THIS piece at THR.  Solmon wrote the original MEN IN BLACK, and is beloved to many-a-Geek for being a co-writer on the unequalable BILL & TED movies (he also co-wrote a third installment for Keanu Reeves and Alex Winter, which is slowly inching its way toward reality...MAYBE...HOPEFULLY).

Jones' book was originally brought to the screen in 1970 via a chilling and fascinating version directed by Joseph Sargent.  If you're a fan of Sargent's THE TAKING OF PELHAM 123 (1974)?  Imagine the vibe of that film intermixed with WAR GAMES and you get a good sense of what the movie is like. It's fucking amazing.

While little is known regarding what direction this new adaptation will take, there's been some indication that Smith's iteration may actually be cribbed from the whole of Jones' literary trilogy, which also includes THE FALL OF COLOSSUS and COLOSSUS AND THE CRAB.
If this so so, I can totally imagine a film shaped from the first two books (COLOSSUS and THE FALL OF COLOSSUS) - as they more or less form one ginormous story which could feel organic and epic and even wrenching when combined into a whole.  I'm not so sure there's much to use from Jones' third book, though...it seems almost like a different tale entirely (involving extraterrestrial contact with Colossus scenarios shoehorned in).  Hopefully the new movie will stay harder and more immediate and not head off into funkier directions.

I'm a gargantuan fan of the original film (my Disqus avatar is actually the government's Colossus logo)...

...thus I feel territorial and protective of this property.  I can see a re-adaption working very well, especially if it incorporates material from the book sequels which were never brought to screens.  But such imaginings are tempered with cautious, almost paranoid, uncertainty.  Well see...