Ahoy, squirts! Quint here. After Evil Dead I busted ass over to the new Topfer theater, a venue that is causing a bit of a ruckus with SXSW attendees this year due to it being just far enough away from downtown to make it a giant pain in the ass to get to, but being close enough to be a huge temptation to adventure over to in order to make all of our incredibly packed schedules work. Evil Dead ran a good 30+ minutes late and I had to skip out before the Q&A started in order to even have half a chance at making it to the Topfer.

The stars aligned. Parking spots magically opened up, traffic parted like I was Moses and all these blasted out-of-towners were the Red Sea and the V/H/S/2 screening started just late enough for me to arrive and grab my seat.

So, what could have been a Hulk-out ball of stress turned into a rather painless transition and I got to see V/H/S/2. Yay me! 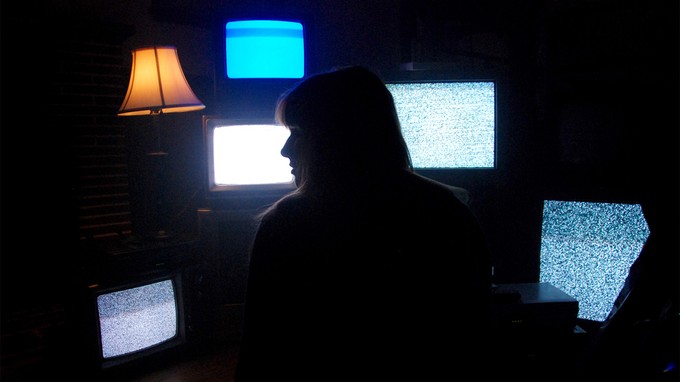 Last year I saw the premiere of the first VHS at Sundance and quite liked it. I know that was a divisive film, but I dug the Tales From The Darkside quality to the anthology.

This new VHS film doesn't hit the same lows as the first (I didn't care much for the segment in the woods where the killer lived in the tracking of the video) and it hits a similar high (I really liked Radio Silence's haunted house segment in the first), so I suppose you could call this a superior sequel.

The wraparound story is about a sleazy private eye and his partner in crime who are hired to find a college dropout and when they break into his house they find a familiar looking bank of monitors and stacks and stacks of tapes.

While it's not great, I much preferred this wraparound to the previous about the jackasses that run around breaking shit for what seemed like 27 minutes. At least here they get right to it and writer/director Simon Barrett plays with far background subtle creep-outs to greater effect.

The first segment, directed by and starring Adam Wingard, is the weakest, so I thought I was in for a rough time. It's not offensively bad, though, and a pretty neat idea… It’s about a rich dude that loses his vision and has some kind of prototype camera eyeball implanted, but it just didn't do much for me. The concept of this surgery making it possible for him to see the dead (and they realize he can see them) is pretty good, but the acting's not very good across the board and the ghosts just look like regular people with flat white pancake makeup on them... and not even in the creepy Ju-On way.

Eduardo Sanchez and Gregg Hale (The Blair Witch Project) kicked things up a notch with their GoPro-filmed segment called A Ride in the Park, which begins with an extreme sports guy getting his helmet cam set up as he tears through a bike trail in the wilderness somewhere. When zombies show up things get pretty real. The twist to this segment is pretty great. It was one of those times where you’re sitting there going “I wonder if they… oh, yep. They just did it. Awesome!” I won’t say much more than that, but I liked the escalation done here.

The standouts were the final two segments, though. Let’s start with Safe Haven, directed by The Raid’s Gareth Evans and The ABC’s of Death’s Timo Tjahjanto. This one’s about an investigative documentary crew being invited into an Indonesian cult compound.

Holy shit does this one get fuckin’ bonkers. It’s a slow burn and the longest segment of the anthology by a lot, but by the time we hear the final word of the short you’re either sitting there with your jaw hanging open, grinning with glee or you’re out in the lobby because it’s just too much to handle. Tjahjanto and Evans take that great thickly atmospheric cult/devil worship tone from films like Rosemary’s Baby and The Exorcist (and The Exorcist III for that matter) and use it to put the screws to the audience. You never quite know what to expect next and the final line of the short is so fuckin’ good I can’t even think about it without smiling.

Jason Eisener’s Alien Abduction Slumber Party closes out the anthology (if you don’t count the wrap-around, of course) and the title means I don’t have to dance around the particulars too much. If you’ve seen Eisener’s Hobo With A Shotgun, you know he’s a filmmaker that puts the emphasis on fun and this one is a whole lot of fun. 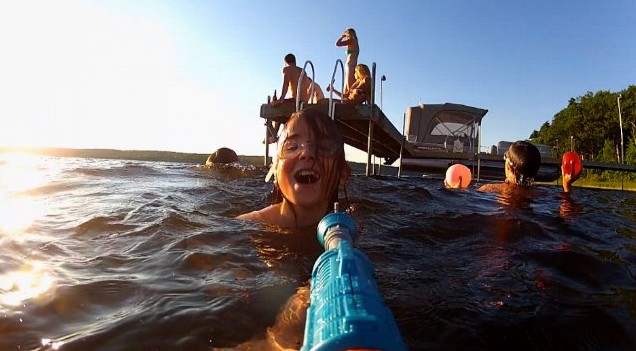 It follows a bunch of kids and their dog as they torment one of the kid’s big sister. They live on a lake (it’s Canada, everybody lives on a lake) and some strange lights hover over the lake at night… oh, and creepy ass aliens pop up every once in a while until the shit hits the fan and everybody has to avoid being abducted.

The kids are filthy-mouthed and filthy-minded (you know, like real kids) and the when the horror starts you’re already pulling for them just like you’d pull for the group of friends in Stand By Me or The Goonies.

Overall it feels like the filmmakers decided to double down on having fun instead of being more snuff-like. I will say the whole found footage conceit isn’t my favorite. They do it well, but watching V/H/S/2 just made me wish and hope that this quality of filmmakers would be able to do a straight up old school made-like-a-real-movie horror anthology. I miss those. The only ones we get now are either found footage or Syfy level direct to VOD shit.

Anyway, V/H/S/2 is a step up from the original film, which I liked a whole lot to begin with. Horror fans will dig it and non-horror fans… why the hell would they be watching this in the first place?!? 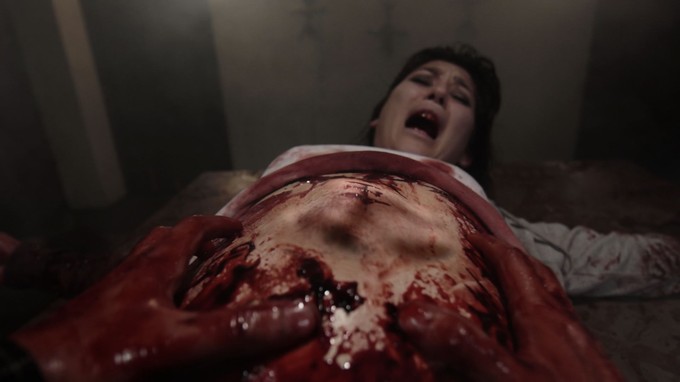