Quint thinks BEFORE MIDNIGHT is incredible and easily the best of the series! SXSW 2013!

Ahoy, squirts! Quint here. SXSW is an amazing film festival and has served as the launching pad for movies of all genres, but it's definitely associated with being ground zero for the mumblecore movement. With a few notable exceptions, I'm not a big fan of the kinds of films that can be easily classified as "mumblecore" (what can I say? I like scripts). My distaste for that particular subgenre was only underlined when I saw Richard Linklater's Before Midnight back to back with one of those "mumblecore" type films (A Teacher) here at the fest.

It struck me about halfway through Before Midnight, during a dinner scene with Ethan Hawke, Julie Delpy and a range of friends and acquaintances of all ages, that every mumblecore filmmaker thinks they're making these sorts of Richard Linklater films. Except they miss the point. That dinner conversation I mentioned is incredible. It's the first time in a decade where I realized that I felt like I was legitimately a participant in an onscreen conversation. I felt like I was there at the table, listening to new friends talking about their lives and was captivated.

It felt real, but I guarantee you Hawke, Delpy and Linklater didn't just sit down, roll the cameras and wait for everything to work and feel natural, which is where so many mumblecore films go wrong. If I were a betting man, I'd wager that Before Midnight was pretty meticulously scripted and the realism comes from Delpy and Hawke pouring their hearts into the script and, you know, being good actors.

The buzz coming out of Sundance on Before Midnight was through the roof and I gotta say the movie lived up to the hype. I've loved the previous films, but there's something about this movie that is sticking with me more than the first two. I think it's that the idea of romantic love has evolved to a point of extreme realism. It's not that the first two aren't real, but as the characters have grown up so has the reality of their love.

The spark of first meeting and the spark of reuniting after a decade isn't there. Now it's two people that have made a life together, have started a family together, who have grown out of puppy love and into something much more complicated.

I'm a romantic at heart, so the whole concept of love at first sight totally works for me, but I have to say the incredibly complicated and strained relationship shown in Before Midnight came across as ten times more romantic to me. I can't explain why because there are some arguments that happen between Hawke and Delpy that are straight up mean, which I don't tolerate very well in real life or in my romantic movies. Perhaps it's because we've seen their love from the beginning and have seen the evolution over two films, but for whatever reason the raw emotion and personal conflict between the two didn't play as annoying or people-being-awful-to-each-other.

The arguments only served to highlight just how perfect these two are for each other. They are flawed people who use faulty logic to make excuses for some complicated emotions they're dealing with, but each one's flaws compliment the other. There's some reactionary meanness, but like in a real life argument when a line is crossed the line-crosser usually realizes it and immediately feels bad about it. You can see that here.

I don't want to give the impression that this whole movie is Delpy and Hawke yelling at each other. I couldn't have run with that. Most of the movie is that great chemistry we've come to know and love from the previous films. They aren't constantly at each others' throats. They ease into the arguments and those arguments have a 1-10 range with 1 being playful ribbing and 10 being "walk out crying."

From happy to sad, you still feel like these two people were meant for each other and are fascinated by each twist and turn of their relationship. It's fascinating and hypnotic, almost, just watching them live together.

Before Midnight is a fine addition to the series (and I'd argue the best) and I'm already looking forward to checking in on their lives in another 8 or 9 years. 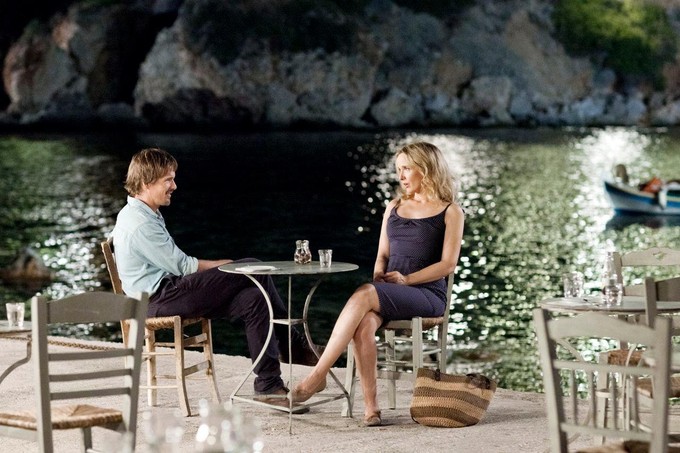