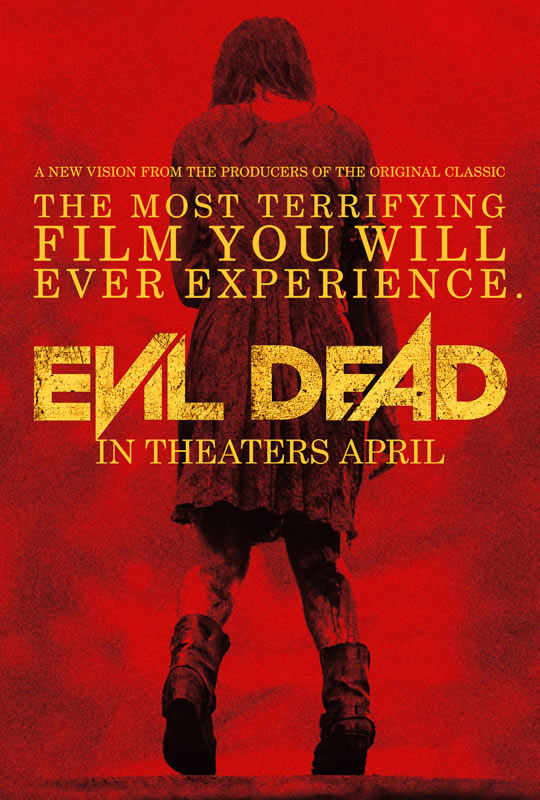 They say the road to hell is paved with good intentions.  Well, Fede Alvarez had the best intentions when remaking EVIL DEAD, and EVIL DEAD is most certainly a trip to hell.  The movie is 20 pounds of gore in a 3 pound bag - at times it literally overflows with the stuff - and Fede and his team of effects artists pull no punches.  EVIL DEAD is extremely gory, a non-stop ride that can be too intense for those people who aren't used to no-holds-barred horror.

There's also a dramatic arc that was surprising - these characters, for the most part, aren't simply meat for the grinder.  They sometimes dip a toe into stereotype, but Alvarez takes pains to make sure that these people aren't simply filling a slot like the characters in THE CABIN IN THE WOODS.  Comparisons to CABIN, however, won't be completely unfounded - the plot fills that template quite handily, and if Bradley Whitford and Richard Jenkins showed up at some point, it would almost make sense.  Sometimes characters make typical horror movie decisions, and unfortunately one particular character makes some choices that left me groaning a bit, but without a key bad choice in the movie, there wouldn't be a movie.  Audiences will just have to forgive that for the movie to move forward.

If they do, they are in for some relentless horror filmmaking.  Alvarez sets the stakes and sometimes takes longer than perhaps was necessary, but the second half of EVIL DEAD simply does not stop.  It is terrifying, gory, and even though that poster sets the bar rather high, I'll be damned if there aren't moments that meet those lofty expectations.

Mia (Jane Levy) is a heroin junkie desperate to kick the habit.  She's been down that road before, however - at one point in her recent past she overdosed and briefly died - and this time, her friends aren't going to let Mia back out of it.  So her friends take Mia \to a remote cabin owned by Mia's family, deep in the Michigan woods.  Enter her brother David (Shiloh Fernandez), who Mia hasn't seen in quite some time.  When Mia's mother died in the hospital, David wasn't there, and he carries that guilt.  Mia won't let him forget it, either.  David's girlfriend Natalie (Elizabeth Blackmore) is also there to help, along with close friends Eric (Lou Taylor Pucci) and Olivia (Jessica Lucas), a nurse to make sure things don't get out of hand.

But things aren't as they seem at the cabin - there's apparently been a break in, and when David makes his way to the cellar, there are quite a few dead animal carcasses hanging from the ceiling, and a strange book, wrapped in plastic and barbed wire.  Anyone who has seen an EVIL DEAD movie knows what's next - that book will be opened, and the demons summoned.  Those demons go straight after Mia, and as she tries to convince everyone that horrible things are happening and not simply in her detoxing mind, events quickly spiral out of control.

Jane Levy is the star of the movie and she carries everything that her character goes through exceptionally well.  A lot is asked of her and she delivers on all fronts.  I especially liked the interplay between her and Shiloh's David - Mia never lets David forget that he abandoned her when she most needed him, and the demons exploit that in an unexpected manner that seems more out of THE EXORCIST than EVIL DEAD, but it works in the film.  Shiloh, for his part, does very well in playing that guilt, and gives poignancy to what could have been a routine character.

But we don't come to an EVIL DEAD movie for complicated family relationships, we come for the scares.  And boy, does EVIL DEAD deliver.  Most horror movies don't bother me, especially when the gore is overdone - I tend to gravitate into the filmmaking aspects of how they did it as opposed to being truly bothered by it in the contest of the movie.  But EVIL DEAD so skillfully uses the gore that you can't hep but cringe in pain at some moments.  Eyes impaled by needles, severed limbs, sprays of blood - hell, literal storms of blood - it's all there, and Fede Alvarez manages to balance the humor and the horror of those moments perfectly.  Hearing an audience react the way that this one did was especially fun, and if there's a midnight release of EVIL DEAD, I think that just might be the place to be that night.

Lou Taylor Pucci's Eric makes a few bad, dumb typical horror movie decisions, but he plays the empathetic friend to Mia well otherwise.  Jessica Lucas and Elizabeth Blackmore have a rough time of it - Jane Levy does too, and I'm sure there will be an interesting dissertation down the road about how women are treated in this movie - but the gore is so well done and spectacular that you really don't think of the context of it until later.  Yes, original fans will definitely recognize some punishing moments.  This movie is very obviously in that universe.  Whether or not you have the stomach for it is up to you.  But the gore works as well as it does because we come to care for these people, who definitely don't deserve what's coming for them.

For people insisting on comparing this one to the originals, never fear - those originals aren't going anywhere.  Hell, Anchor Bay releases a new version on Blu-Ray practically every year.  Fans should embrace those movies they love and yet allow other voices to play in this world that Sam Raimi, Robert Tapert, and Bruce Campbell have created.  Fede Alvarez comes to EVIL DEAD from a place of love and respect, and he honors those movies by making one that isn't as beholden to the originals as you might think.  It's definitely an EVIL DEAD movie, and Fede Alvarez said at the Q&A last night that he fully intends to return to EVIL DEAD in the future, so he's not going anywhere.  This isn't a remake so much as it is an opportunity - an opportunity to inspire a whole new generation of filmgoers, to scream, to laugh, and to wonder just how in the hell the filmmakers got away with it.  EVIL DEAD is a very worthy addition to the franchise - and yes, it is a franchise - and I'm dying to see this again with a crowded house full of horror fans.  These guys and gals did good.

One more thing - the score.  Roque Baños does incredible work, and the score is batshit insane.  It's the music Cthulhu would listen to if he was rolling on the beach in a convertible with the top down.  I want this soundtrack in the worst way.