Ahoy, squirts! Quint here fresh from a horror double bill to kick off SXSW 2013: the world premiere of Evil Dead and the SXSW premiere of V/H/S/2. I have to be up for an interview with Richard Linklater in about 6 hours, so forgive me if I keep this short. 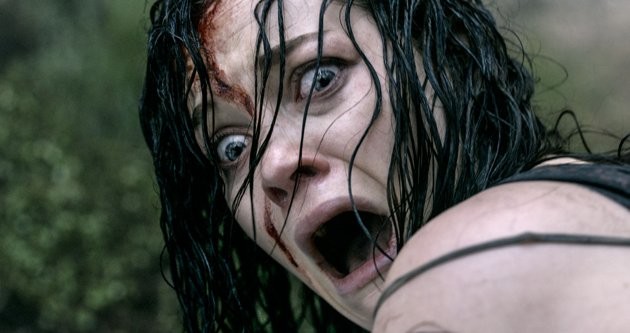 You can say a lot about the Evil Dead reboot, but you can’t deny that Fede Alvarez and his team swung for the fences. This is hands down the goriest big studio film since District 9 and Neill Blomkamp’s brilliant sci-fi tale looks like Bambi in comparison to the kind of fucked up (and mostly practical) shit we see in this film.

I like the basic conceit of this movie: a girl needs to kick heroine so her friends and brother take her to an old family cabin so she can go cold turkey. That cabin just happens to have an evil ass book and a bunch of dead cats in the basement.

The tone from that great Red Band trailer is exactly the tone of the movie. They aren’t pulling any punches and Alvarez revels in making the audience squirm. He’s also not afraid to run his cast through the ringer. Jesus Christ, the shit he puts his people through makes Sam Raimi’s treatment of Bruce Campbell seem downright cuddly.

Now, the flick isn’t perfect. Jane Levy is really great as the lead, Mia, but they don’t spend enough time with her at the beginning to really make me believe she was so critically hooked on drugs that this was the lifesaving excursion the rest of her friends make it out to be. I was also expecting them to play up the junkie-seeing-shit a bit more, but I’m frankly not too sad to see them ignore that in favor of jumping right into the thick of it.

Levy’s Mia is good and I liked Lou Taylor Pucci’s Eric quite a lot. He’s an English teacher whose curiosity and smarts kind of fuck everybody over and he pays a price. As much as Fede beats up poor Jane, he doles it out on Pucci about 200 times worse. That guy is sorry he stuck his nose in that human skin bound book, that’s for sure.

Jessica Lucas was fine, but I think Elizabeth Blackmore doesn’t do a very good job here. Her line delivery is cringe-worthy, but does sell her big moments pretty well. I don’t think it’s much of a spoiler to say that most of the people we see will go deadite at some point and her turn at it is particularly effective, but when it comes to building up a character or selling her lines I felt she wasn’t quite up to snuff.

Shiloh Fernandez is trickier to critique. His character, David, is given the biggest arc of any character in the film, but he’s also strangely given almost nothing to do and as a result I’m not sure if his underplayed performance is dead on for what they wanted or a missed opportunity.

One of my favorite parts about this film is that they don’t pussyfoot around. Once the incantation is read and the entity zooms around the woods the movie doesn’t stop. It’s relentless in that way. The story escalates quickly and gets dirtier, grimier, bloodier and more fucked up as it races towards a spectacularly gory finale.

In a way this is the kind of horror movie fans have been demanding since the Scream craze hit and we spent a decade or so lacking in serious, gut-punch horror. The psychological aspect of the movie isn’t as strong as I was hoping it’d be, but they go so crazy that you never quite know what is or isn’t off limits, which is always a huge deal for a horror film.

The fun of the Bruce Campbell/Raimi films is hinted at, but it is a very serious movie… well, as serious as a movie with a chick cutting her face off or a close up of a needle going into someone’s eye can be, but you know what I mean.

I’d be lying if I said I didn’t miss the trademark Raimi cartoonish insanity, but I have a feeling if this one does well that kind of tone might start creeping into the next in the franchise.

The question of whether or not this is a sequel or a remake or what is definitively answered, by the way. I don’t want to spoil it, but I will say if you’re a post-credits stinger fan then stick around. I’m sure you’ll find out before the movie comes out if you don’t know already, but I won’t be the one to lay it out. 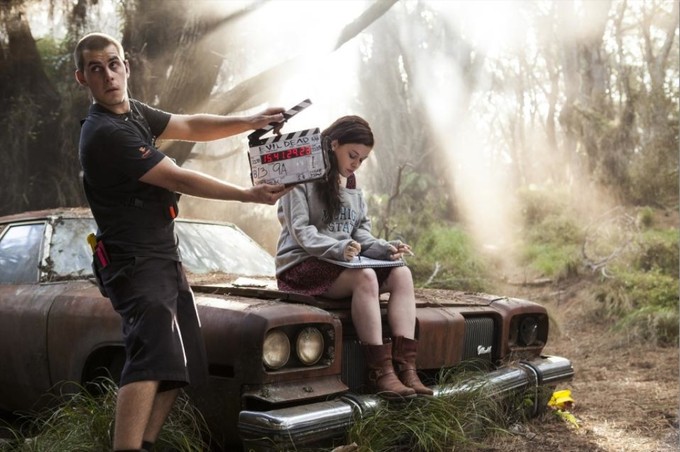 So, yeah. I think Alvarez did right by the franchise. His deadites are a bit more Exorcist than they are Raimi, but he nailed the tone, he cast the perfect lead and his DP Aaron Morton shot a straight up gorgeous horror movie. It’s refreshing to see a practical effects-driven gorefest that isn’t treated like a B-film.

Now I catch some sleep. I’ll be back tomorrow in-between my various interviews and screenings to give you my thoughts on V/H/S/2. Stay tuned!