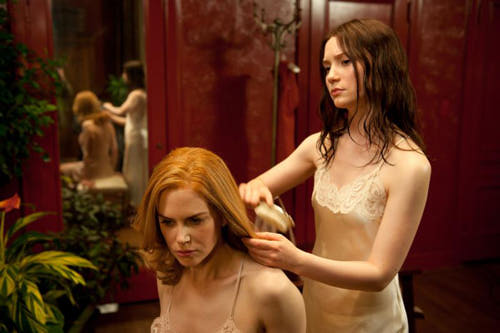 Park Chan-wook's STOKER is anything but a tentative flirtation with Hollywood. From the opening shot, this pitch-black coming-of-age tale is instantly identifiable as the work of the South Korean auteur who gave us OLDBOY and the SYMPATHY FOR... films. As eighteen-year-old India (Mia Wasikowska) stands off to the side of the road, shot from a low angle, dress flowing in the wind (freeze-framed just as the hem kicks up to a slightly unwholesome height), we feel a perverse exhilaration. With little to go on but this cryptic imagery, we nonetheless know beyond the, er, shadow of a doubt that this story is destined to end in an awful, bloody, kinky mess - and given Park's tremendous cinematic gifts, we can't wait to take that sordid journey. That this is all about to occur in a film fronted with a studio logo makes it all the more unexpected and thrilling.

The miracle of Park Chan-Wook's STOKER is how the film remains unrelentingly the work of the man who gave us OLDBOY. As India contends with the first stirrings of womanhood, which coincide with the death of her father (Dermot Mulroney) and the arrival of her predatory Uncle Charlie (<del>Joseph Cotton</del> Matthew Goode), Park and screenwriter Wentworth Miller elegantly guide the viewer through a labyrinth of twisted, incestuous passion. India detests her mother (Nicole Kidman), and fumes as Charlie makes a seductive case for filling the family's recently-opened patriarchal void. But the more her uncle hangs around, the more she begins to realize how much of his blood courses through her veins. For India, it's a horrible, yet undeniably arousing proposition, culminating in a loss of innocence that is, at its core, as much about the potential creation of life as the definitive *ending* of it.

STOKER is a meticulously designed film, with every detail in the house - stuffed birds, the profondo rosso of Kidman's boudoir, and the baby grand piano rather insistently positioned in the front room - placed as such to emphasize the narrative's peculiar mix of sexual dread and yearning. Park's visual storytelling is so precise you could probably watch STOKER on mute and easily follow along, but then you'd be depriving yourself of the film's most sensuous element: sound. Everything from the foreboding echo of footsteps on a hardwood floor to the yawning sustain of the baby grand (particularly during the sexually-charged duet between India and Charlie) heightens the film's aberrant sensuality.

Thematically, STOKER seems as rife with contradictions as Park's other films: yes, it's awash in notions about sexual and psychological awakenings, but the reverie's the thing. Given that filmmaking of this quality is at a premium nowadays, I'm fine with some stylish delirium that, perhaps, signifies little.

I interviewed Park a few weeks ago during the L.A. Press Day for STOKER, and was hoping to pin him down on the picture's multiple allusions to Hitchcock - both visually and narratively. I started him off with a pretty basic question, and he proceeded to discuss the one scene in the movie you shouldn't know about beforehand. He doesn't completely spoil it, but I'd love for you to enter the film clean, so, for the spoiler-sensitive, skip the first question-and-answer, and Dive back in with the second question.

(One last note: Park spoke through an interpreter who answered in third-person. To avoid any awkwardness, all answers are now in the first-person.) 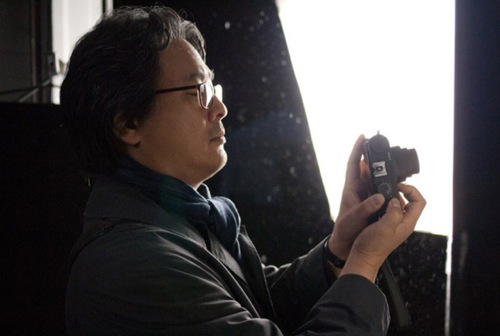 Mr. Beaks: When you first read the screenplay, was there a scene or a moment that hit you like an epiphany, that made you say "I have to direct this movie?"

Park Chan-wook: That moment was the shower scene. It was written already as a crosscut sequence, but as I was trying to picture this scene as I was reading it, I could feel myself getting really excited at the prospect of creating this scene. The escalating emotion in that scene is something I found to be quite exciting. That's owing in part to the crosscut nature of the sequence. That's when I felt, "I should put more crosscut sequences like this in the movie." That's the moment of the epiphany, if you like. That's the moment I felt I could make this film work.

Beaks: The visual design of the film is very meticulous. I know that you storyboard. How do you work out your main visual motifs in relation to the story you're going to tell?

But it's not always the case that you can explain everything with words. For instance, "Why do I want to use the color red here? Why do I want the camera to move forward here?" Sometimes I make those decisions because I just feel that that would be the best thing to do here. But after I'm finished making the film and watch it later on, I realize why I made those choices. Take the crosscut for instance. I always thought that decision made no sense because of some musical explanation or reason. That is to say, there is a rhythm to the way scenes are crosscut, and I just like the rhythmic nature of using crosscut. However, later I realized, having seen the film again, what I really wanted to express by using these crosscuts is the concept of fate. In other words, crosscut mixes different individuals' past and present, reality and fantasy. Crosscutting is an effective way to weave these together, and the result that I was looking for in doing so is saying, "It is all a fabric, part of a bigger fate."

Beaks: Watching the film, the first moment I heard "Uncle Charlie", I thought SHADOW OF A DOUBT. So I immediately began to look for echoes in the developing relationship between India and Charlie. I can see where you were in dialogue with Hitchcock, where you were utilizing Hitchcockian elements in your way, much as Brian De Palma would. How did you approach playing with themes and visual techniques formerly associated with Hitchcock?

Park: Those Hitchcockian elements were already laid out in Wentworth's script. However, although Director I admire Hitchcock so very much - it was Hitchcock's work that influenced me to become a filmmaker in the first place - I didn't want to emphasize this too much or reveal this too much. In fact, I wanted to cut down the amount of Hitchcockian references - which is why my first suggestion was to change the name of "Uncle Charlie". I wanted to call him "Uncle Johnny" - which, I suppose, would then be Kubrickian. (Laughs) "Uncle Charlie" was already on the lips of everyone involved with the film, but this was my attitude at the beginning.

At the same time, I didn't want to be too conscious of Hitchcockian references. I didn't want to step away from it or step closer into it either. I just wanted to leave those Hitchcockian references where they were. I wanted to approach it in the manner of "I'm just making my own film here." But two things made me realize, after the film was completed, that inadvertently I actually took steps closer to Hitchcock's world. First, it was in the casting of Matthew. In creating the character of Uncle Charlie through Matthew Goode, his outward features and his manner of performance that I would direct, it invariably ended up reminding me of Norman Bates. The second thing was, in STOKER, there is a significant hunter/predator motif - especially the hunting of birds, because India is a creature breaking out of her shell. In this sense, that's why I filled Richard's room with all of these stuffed birds. But having seen that on the screen, I realized, inadvertently, "That's PSYCHO." Though my motive of doing this was much different than Hitchcock, I thought, "Well, there's a Hitchcockian net over this film that Wentworth has already cast, and I can't get out of it."

Beaks: But your style is still incredibly prevalent, particularly in that wonderful transition from the brushing of the hair to the tall grass, where India and Richard are hunting fowl. Where did that idea come from?

Park: That particular transition didn't really take much in the way of deliberation. It's something that easily came out, so much so that I can't even remember the thought process that brought me there. It was almost instinctive. All throughout the film, I decided to use crosscutting technique. Once I decided on that, I promised myself that I will have one principle that I will abide by, and that principal was each shot, and how they move on to the next - whether the cuts would crash or whether the cuts would continue on smoothly - how each shot transitions into the other shot in these crosscut sequences, it needs to be something very well designed. So I applied many techniques to achieve this, be it match cut, dissolve, what have you. It's born out this base principle. But I did think that this particular transition was particularly important because it was a transition from a mother moment going into a father moment.

STOKER is currently in limited release. It will expand throughout the month of March, and you will go see it when it arrives anywhere that's remotely drivable.