Nordling Is A Little Over The Rainbow About Sam Raimi's OZ THE GREAT AND POWERFUL! 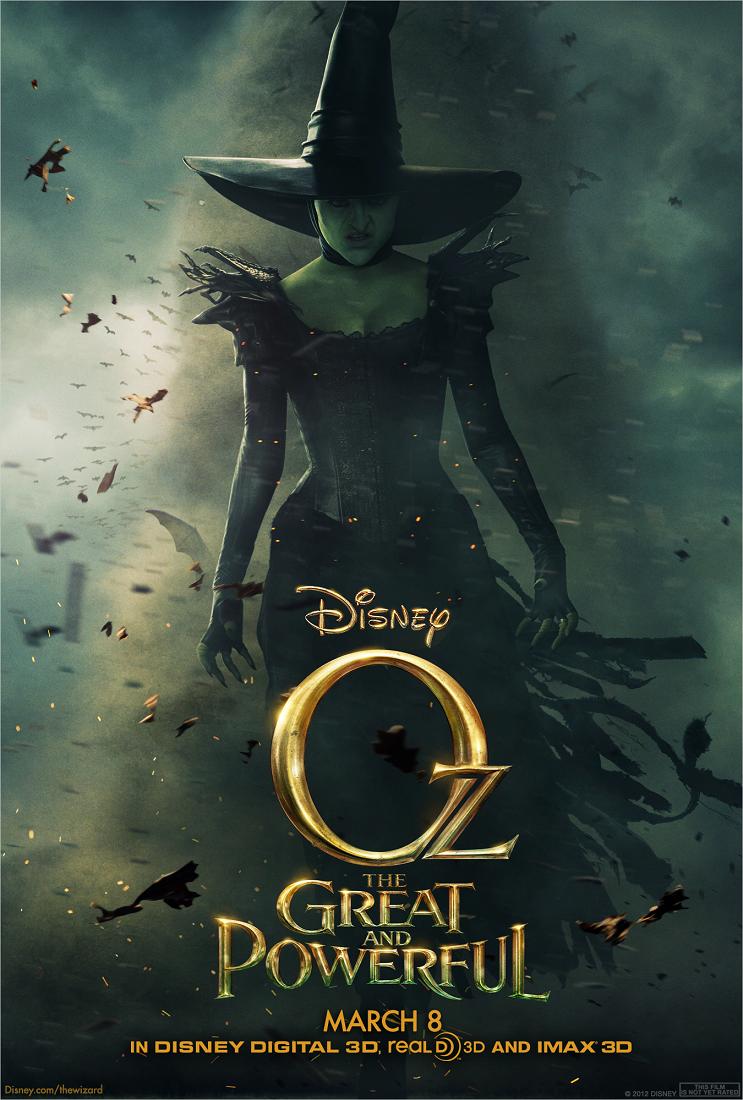 Sam Raimi respects his source material.  His take on Spider-Man, for the most part, is loyal to the comic.  Even when SPIDER-MAN 3 goes off the rails, he still knows what makes Peter Parker work for so many fans.  The same goes for his OZ THE GREAT AND POWERFUL.  Raimi sticks remarkably close in feel and theme to the original classic movie, even with similar color schemes and camera moves.  Even the acting feels like it’s from that era of filmmaking – what audiences today may find over-the-top at times synchs perfectly with the original WIZARD OF OZ.

It’s this old fashioned sensibility that makes the movie work.  There are moments where OZ comes close to being silly – and at times sticks a foot over that line – but Raimi is so confident in his world and how he presents it that OZ THE GREAT AND POWERFUL will win many over.  More cynical audiences will probably not enjoy Raimi’s trip into fantasy and whimsy, but Raimi puts just enough darkness and humor into it that OZ THE GREAT AND POWERFUL remains enjoyable.

Oscar (James Franco) is a carnival magician playing small venues in turn-of-the-20th-century Kansas, but he has eyes for bigger things.  “I don’t want to be a good man, I want to be a great one,” he tells Annie Gale (Michelle Williams), and the small town life is not for him.  Oz, as he calls himself, is a bit morally slippery himself – he’s not above doing whatever it takes to win an audience or a naïve lady assistant.  When he’s chased out of the carnival by people he owes money to, he hops onto a hot-air balloon that comes in contact with an all-too-familiar twister, and suddenly, Oscar’s in the Land of Oz, and the subject of a prophecy that says he will save the Kingdom.

Witch Theodora (Mila Kunis) is convinced that Oz is the one the prophecy spoke of, but sister Evanora (Rachel Weisz) isn’t so sure.  Still, Oscar’s easily manipulated, and so the sisters persuade Oz to go to the Dark Forest and kill the Wicked Witch that resides there.  With the help of Finley the Monkey (Zach Braff) and the China Girl (Joey King) Oz makes his journey.  But not everything is as it seems in Oz, and Oscar must use all the trickery he has up his sleeve to save the land.

Visually, OZ THE GREAT AND POWERFUL is gorgeous, with bright colors and beautiful imagery.  Raimi doesn’t hold back in his usage of 3D – there’s real depth of field, and Raimi can’t resist using the technology to have some good fun poking various things at the screen.  It’s playful and fun.  Raimi seems to love living in this world, and obviously the technology has grown since 1939.  There’s an awful lot of green-screen here, though, and people will miss the elaborate sets of the original.  It’s still a visual feast – it’s a fantastical world, so when something doesn’t look quite real, like the CGI of Finley the Monkey, it still works in context – and with the work of the effects artists Raimi makes a living, breathing Land of Oz.

It also helps that the script by Mitchell Kapner and David Lindsay-Abaire is decidedly old school in cadence and dialogue.  Again, they are loyal to the source, and even though the technology is leaps and bounds over the original, the characters still talk very much in the style of the original.  That also goes for the performances, and James Franco as Oz can at times be a bit ingratiating.  But his heart is in the right place and Franco plays Oz as a good man almost in spite of himself.

Still, Oz isn’t above playing with the emotions of a pretty lady, and Mila Kunis gives what will likely be the most controversial performance in Theodora.  In the first half of the movie, she is naïve and innocent, even when she comes to realize the truth of things.  Later, in the second half, Theodora changes into pure malevolent fury, a scorned woman with no pity or mercy, and it’s this part of her work here that may leave many people scratching their heads.  But I quite liked her work in both instances – you can see the wounded creature beneath her transformation, and even though second-half Kunis screams every other line I found a subtlety to her work here.

Rachel Weisz’s Evanora is a more obvious villain, and she does decent work, but she’s outshone by Kunis.  Michelle Williams, by contrast, is fairly bland and uninteresting, but that’s a flaw of the character more than her work.  She’s written as a paragon of goodness and decency, and there’s hardly any conflict within her, and it doesn’t make for interesting drama.

The CGI creations of Finley and China Doll are lovely.  Finley is a very obvious computer creation, but Braff plays him with a lot of wit and sincerity, and Finley feels believable in the context of everything fantastical in the land of Oz.  China Girl, however, practically looks photo real, and it helps that Joey King fills the part with warmth and passion.  It’s always nice when all-CGI characters aren’t simply effects to be marveled at, but are actually full characters and move the story along.

At times OZ THE GREAT AND POWERFUL can be shrill and loud, especially during the movie’s climax, but it all stays true to the source.  Audiences are more complicated than in THE WIZARD OF OZ’s heyday, and Sam Raimi has made a throwback to those kinds of fantasy films.  That’s not to say that OZ THE GREAT AND POWERFUL can compare in quality to THE WIZARD OF OZ – of course not.  But it’s certainly made of the same fabric, and audiences may have to do a little work to get back into that mindset.

OZ THE GREAT AND POWERFUL isn’t a great film, but it is a good one.  EVIL DEAD aficionados will find a moment here and there to cackle at – this is still very much a Sam Raimi film, it’s just a four-quadrant Sam Raimi film.  Younger children may be frightened at some of the imagery, especially the witches, but as family films go, OZ THE GREAT AND POWERFUL delivers on almost all fronts.  It’s old fashioned in so many nice ways, and it’s one of the better prequels out there.  Sam Raimi stays true to the original movie, and does L. Frank Baum’s world justice.