GUARDIANS OF THE GALAXY will feature Marvel's space cops!

Hey folks, Harry here...  Amazing how people collide upon stories on the exact same day.   Late yesterday I was contacted by a source instructing me to call him, The Moffballs, telling me that after they had a dinner with a friend that is a confirmed part of GUARDIANS OF THE GALAXY's production team, that the friend let it slip over the meal that NOVA CORPS were definitely a part of the movie. 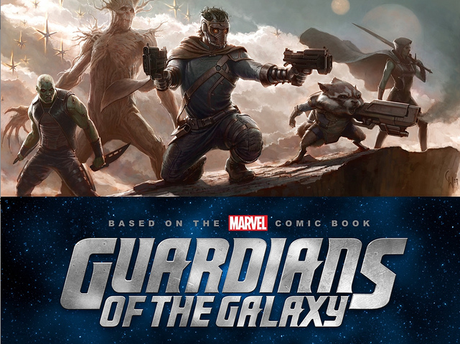 Then, while researching the lead I was looking at that Production Art and I'll be damned if those aren't NOVA Corps ships in the background.   And to add more gasoline to the sparks of this...   Geoff Boucher drops a big comic scoop and floating that NOVA could be in the GUARDIANS OF THE GALAXY movie.   Well, I feel very safe in thinking this is pretty much a definite.

Don't know squat about NOVA or NOVA CORPS?   That's alright, Marvel is reintroducing the character and its layout in this new Marvel Universe which is so wonderfully entrenched in its crazy cosmic past!  Why is this good stuff?  Well, personally I feel Marvel's Intergalactic Space Cops are pretty damn cool.  Yeah, they're pretty much like Marvel's Green Lantern Corps - but if Marvel ever wants to do a big Skrull SECRET INVASION plotline, the Nova Corps comes in handy there.   With Kevin Fiege saying that this GUARDIANS OF THE GALAXY film is going to be 95% out in space...  I think we've found the cavalry for the Good Guys - but I'm still curious as hell to see who the GUARDIANS are going to be going up against.  And then there's always that IRON MAN addition that is being rumored about.

But ya know - I really can't believe we've come this far, this quickly.   We are seriously in a post-THANOS in cinema world, casting GUARDIANS OF THE GALAXY and now we have to think about NOVA and the NOVA CORPS.   MARVEL is seriously waving the biggest geek flag ever at this point.  I think they're going to blow people away.