Okay, you've just seen Mary Jane Watson on set, how about a new spy pic of Spidey himself?

Ahoy, squirts! Quint here. We all have seen the new Spidey suit for The Amazing Spider-Man sequel (they aren't really going to stick with Amazing Spider-Man 2 are they? Spectacular Spider-Man, come on!) and we all love it, right? I've been off the grid this last week, but how can anybody not love the look of the new suit. It's pure Spider-Man!

If you weren't 100% convinced by the official release, they've started shooting in public and like Mark Webb's first film we're likely to see a crap ton of location photos stream in. We've already seen Mary Jane and now MTV has a shot of Spidey himself hanging around the set. Check it out: 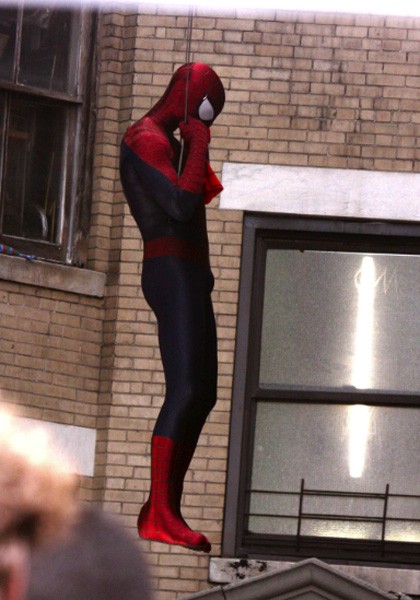 I'm apparently in the minority that really liked Mark Webb's first film. I personally think a lot of Spidey movie fans look upon Raimi's first film with some rose-colored glasses. He miscast half of the regulars and made a horrible decision on the look of the bad guy. He won me over with Spider-Man 2 and I think Webb will do the same with his sequel. Already the costume looks better, Andrew Garfield and Emma Stone were perfectly cast in the first film and will get to play with some new blood, like Paul Giamatti (how cool is that?), Felicity Jones, Dane DeHaan, Shailene Woodley and Jamie Foxx.

I'm very excited to see what Webb comes up with. I think he had a good first run at the universe and if that ends up being his warm up then the sequel could be pretty amazing (ahem).

Also, if you want to see more of the old webhead, /film has a few more pics to sift through.