Hey folks, Harry here with an update from Gary K Wolf himself.   He wrote me just a few short minutes ago to clarify the story he posted upon his blog!   Now let's jump right on in with what Gary has to say.

There’s been a lot written today about the new Mickey Mouse/Roger Rabbit movie The Stooge.

There’s been some question about the story’s veracity.  My fault.  I posted this on my blog under the pseudonym Walter Windchill, the gossip columnist character I created and use to disseminate fake news from Toontown.  I use Walter and his gossipy tidbits to promote my forthcoming Roger Rabbit novel, Who Wacked Roger Rabbit? Real news I usually blog under my own name.  In this case, I simply forgot to change over.

Here’s the true scoop, straight from the rabbit’s mouth.

The Stooge is a real development proposal for a Disney/Pixar movie.  It has the same title as the Dean Martin and Jerry Lewis film and some of the same plot elements, but it’s not a remake. The storyline in this Stooge is quite different.

This movie, which will be all animated, has nothing to do with the sequel to Who Framed Roger Rabbit. They are totally different concepts and projects.  It’s not a case of making one instead of the other.  In an ideal, rabbit-centric world, Disney will make both.

The Stooge development producer Erik von Wodtke came up with the story and wrote the treatment.  He showed it to me hoping that I would see how special it was and would be interested in coming in on the project.  With that, he did succeed.  I love the idea of  a Mickey Mouse and Roger Rabbit musical buddy comedy.  This is a co-star pairing made in cartoon heaven.  Two iconic cartoon characters playing off one another in a story that has the heart and emotional soul of films like Wall-E and Toy Story. What Disney fan wouldn’t want to see that?

It’s a big year for Roger Rabbit.  It’s the 25th anniversary of the film.  Disney is releasing a commemorative Blu-ray edition in March.  My third Roger Rabbit novel, Who Wacked Roger Rabbit?, comes out in November.

All of which gets two big thumbs up from me, two ears up from Roger, and two….well let’s just say that Jessica’s up for it, too.

Art director Doug A Sirois has been working on Stooge concept art. What I’ve seen so far is sensational.  I will be involved in the project in a writing and creative capacity. Erik is currently talking to a number of top-flight screenwriters and directors.  Watch my blog.  I’ll keep fans posted on Stooge developments.  From now on under my own name, not Walter’s.

Harry here again - and let's all thank Gary for filling us in!  So jazzed about this.   I found this online and just thought I'd put it here at the end.  It isn't from this development, but if they are going CG for this - this could be what Jessica Rabbit could look like...   Here ya go: 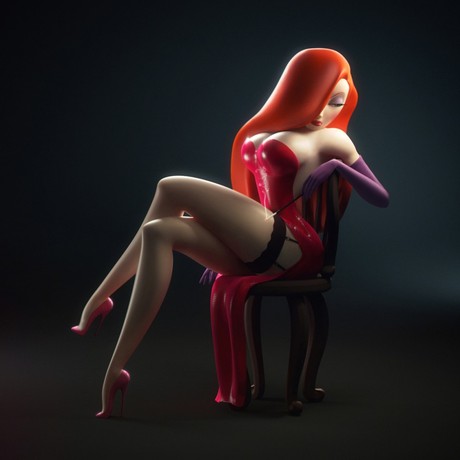