Mickey Mouse as Dean Martin, Roger Rabbit as Jerry Lewis in a feature animated remake of THE STOOGE?!?!?!

Hey folks, Harry here..  Got an email from a new AICN spy calling himself ERIK, that over on Gary K Wolf's website, he is who wrote WHO FRAMED ROGER RABBIT?,  and he delivered quite the scoop last night.  So much so that he even signed off as Walter Winchell.  Here's Walter, I mean, Gary K Wolf's scoop: 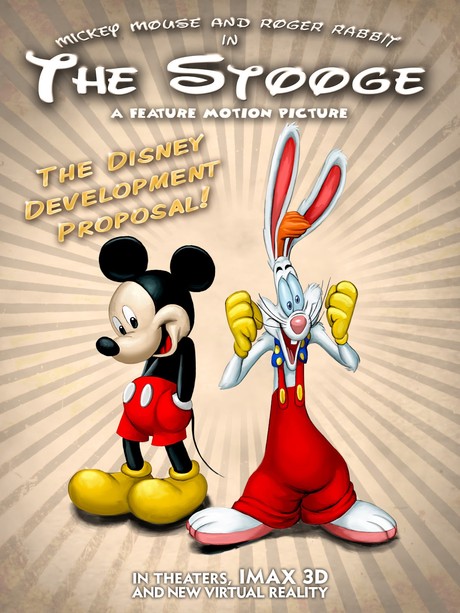 The movie is called The Stooge.  It will be based on the  classic Dean Martin and Jerry Lewis movie of the same name. The story has the emotional empathy and sensibilities of Wall-E and Toy Story. It will be a (G) Rated Pixar type animated musical buddy comedy. Mickey takes on the Dean Martin role, Roger, who is already regarded as a comic genius in France, takes the Jerry Lewis part.
The film incorporates five specific locations from the Disneyland park. It also introduces the Toon Train, an exciting and interesting way to travel through Toontown.
The film features real-life people.  Walt Disney costars. Orson Welles makes an appearance.
The packaged Development Proposal is currently being evaluated by Disney and Pixar.  Meetings are happening! Directors and writers are being evaluated.

Alright, so this isn't in the Greenlight category, but in the dreamland category of development.  As for THE STOOGE with Dean Martin & Jerry Lewis...   Well that's a fun flick.  Here's the trailer for Norman Taurog' comedy:

In many ways, I can see this as being the perfect vehicle for Mickey Mouse, who has lost some of his audience connection.  He just doesn't seem to be the hippest thing these days.   Well, that was the plot for THE STOOGE, Dean Martin's character was a Broadway performer that just wasn't performing up to snuff and is advised to get himself of STOOGE, enter Jerry Lewis.   As for bringing this all to Disneyland - I'm hearing that element is involved in TOMORROWLAND, the Brad Bird project, so it'll be curious to see how they employ that as a setting.  Right now this is one of those possible maybes that's going on behind the scenes.   I'm just curious how they got Paramount to let them use the title and basic plot structure.  Perhaps it is amazing what AVENGERS money can do?