A GOOD DAY TO DIE HARD Is A Terrible Day For DIE HARD, Says The Kidd 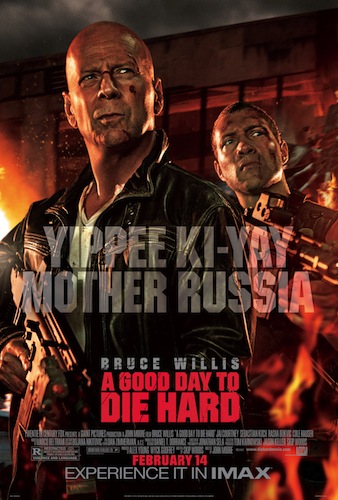 They can call them a part of the DIE HARD franchise all they want, but the movies 20th Century Fox is making now sure as hell ain't DIE HARD. Just because you can call a film one thing doesn't necessarily make it so, and the same goes for John McClane. Just because Bruce Willis insists on trotting out there for another installment as someone who's supposed to be this iconic action character we came to know and love and root for 25 years ago for another installment, and the studio backs it because of the familiar name and brand associated with him does not mean it's really John McClane. In fact, other than the name, there is nothing resembling the John McClane that helped make the original film in the series an action classic in the latest of what passes for a DIE HARD movie these days, A GOOD DAY TO DIE HARD. This isn't the everyman who just happens to be the wrong guy in the wrong place at the wrong time anymore, nor is this the same guy that somehow manages to overcome the shitstorm of obstacles thrown his way, emerging battered, bloody and beaten, for the sole reason that he doesn't like to lose, especially to bad guys. Somewhere along the way, Bruce Willis got in his bald head that didn't have to be that guy that audiences can relate to, that they can substitute themselves for in such dire situations anymore, much in the same way that Eddie Murphy decided he should be an action star instead Axel Foley in BEVERLY HILLS COP III. And you know what...? If that's what he wants to do, fine. That's his prerogative. But don't perpetrate the lie that you're doing DIE HARD again, when your new movie is anything but.

This time around, John McClane heads to Russia where his estranged son Jack (Jai Courtney) is in custody, charged with murder. Now before I even go any futher, the amount of stupidity before the elder McClane even sets foot on Moscow soil is astounding. First off, John is able to get one of his NYPD buddies to locate his kid in Russia, but not only that, obtain the file of Jack's arrest. Then John, who doesn't speak or one would assume read Russian, sits on the plane, thumbing through these documents, written all in Russian, as if they're going to give him some type of insight into his son's case. But beyond that, what's the point of John even going to Russia? What does he think it's going to accomplish? As he's told when he first receives the file, they do things differently in Russia, to which he replies, "So do I." So what's his plan? Is he hoping to sweet talk some Russian judge or some cops into letting his kid go for killing one of their citizens? Strong arm tactics? Prison break? What is your purpose here, John McClane? And in asking those questions, I've clearly expended more energy trying to make sense of A GOOD DAY TO DIE HARD than Willis, director John Moore or screenwriter Skip Woods, because from the word "go," the film is completely nonsensical. 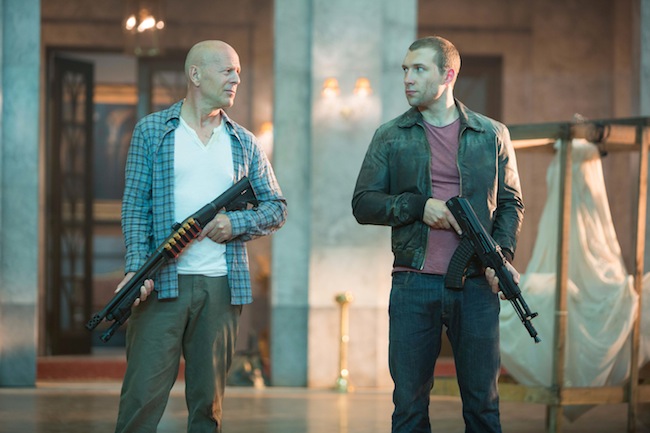 We find out that Jack is a C.I.A. operative, sent into the field to save a Russian political prisoner named Komorov (Sebastian Koch), who has evidence he's willing to share with the world about a higher-up in the Russian government, his old friend and partner Chagarin (Sergei Kolesnikov), and his checkered past. Chagarin doesn't want that, so he gets his own henchman (Radivoje Bukvić) to handle the dirty business of getting some file from Komorov and... you know what? It really doesn't matter. Each of the film's villains and secondary characters are so barely there that it hardly matters what they do or are attempting to accomplish. A GOOD DAY TO DIE HARD makes the mistake of thinking that I'll care about the role each of them will play, because they tell me I'm supposed to. This guy is a political prisoner, so feel bad for him. This guy wants him dead, so root against him. This dude is shooting at McClane, so clearly he's bad. However, if none of them are actually doing anything to advance their cause or my emotional investment, then what's the point of them even being there? Furthermore, if you want to make betrayals or double-crosses matter, you actually have to make the characters who are potentially involved matter as well. Throwing them in as some sort of plot gimmick adds nothing to a story that was barely there in the first place, and reeks of desperation in a weak attempt to be clever.

LIVE FREE OR DIE HARD started the ridiculousness of making John McClane into some sort of superhero, walking away from big action set pieces, unscathed, simply shrugging them off as if they didn't even happen to him... A GOOD DAY TO DIE HARD manages to take it even further. Let me give you an example. John McClane, no more than 10 minutes in Russia, is already involved in a high speed car chase, stealing a flat-bed truck to go after his son whose just blown him off, probably because he doesn't want to see his absentee father but also probably because bad guys are opening fire on him and Komorov who he's trying to protect. As John chases after the bad guys who are chasing after him, he rolls the truck over, dodging an RPG rocket. He manages to get out of the truck, looking as fresh and as clean as he was before he took it in the first place, and steps into the middle of the street, attempting to commandeer another vehicle. He then gets hit by another car, gets up without so much as a scratch or a drop of his own blood on him, punches the driver in the face, and takes his Jeep... all completely fine and unaffected by the trauma that had befallen him. John then manages to drive the Jeep off an overpass onto a car carrier, which he then drives down and off, using the tops of other cars as his new road in order to rejoin the chase, a chase that is so poorly shot and badly edited (Can't any filmmaker doing an action flick these days hold on a shot for more than a half-second?) that it makes trying to follow exactly which character and vehicles the film is on an impossible chore. Of course, McClane winds up bailing his kid out during the sequence, flipping the Jeep as well in a pretty massive crash, and how does it affect him? He simply walks away from the wreck without so much as a limp. 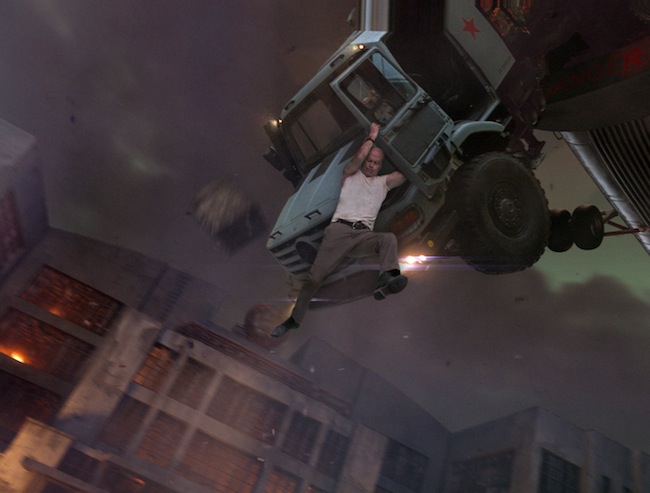 This is the same John McClane who, when he's getting blasted in the face by a bad guy's assault rifle, shakes it off without bloodshed, as his younger, stronger son is bleeding from the nose and mouth at the same treatment. This is the same John McClane who, when he leaps through a window, onto some scaffolding, and then dives down a series of tunnels as he's being fired upon by a military-style helicopter until he comes crashing to the ground, manages to have barely a speck of blood on him, while his kid is a bit worse for wear. Come to think of it, even that speck of blood may not have been his, but merely splatter from his son who was in the nearby vicinity. This is the same John McClane who, when jettisoned through the air through another window, after being swung around at high speeds while hanging onto a truck that was dangling from another helicopter, gets up and walks away as if this sort of thing happens to him all the time and he's built up an immunity to the pain. Every step of the way, young McClane gets beat to shit, while old McClane seems to get a bit more pep in his step, which is quite ludicrous when you consider that John McClane took more damage running through glass in his bare feet in the first movie than he has being assaulted by heavy weaponry and direct contact with metal, concrete, wood, brick and just about every other hard surface material you can think of in the last two films combined.

There was the potential to do something interesting in the relationship between John and Jack, but Moore has no idea how to handle delicate material like that, forcibly wedging it into the film in order to give these two characters some reason to co-exist in the same story. There's something to seeing John McClane's son not falling too far from the tree in chasing down bad guys and stopping scumbags, but the opportunity to expand upon their similar make-up is absolutely wasted in order to concentrate on making A GOOD DAY TO DIE HARD bigger, louder and almost purposefully dumber. How else do you explain the bad guys' drive to get their hands on this evidence file when killing Komorov will accomplish the same thing, essentially making the information he had lost forever with his death? You don't... because trying to inject logic or reason into this stupid movie will only make your head hurt. 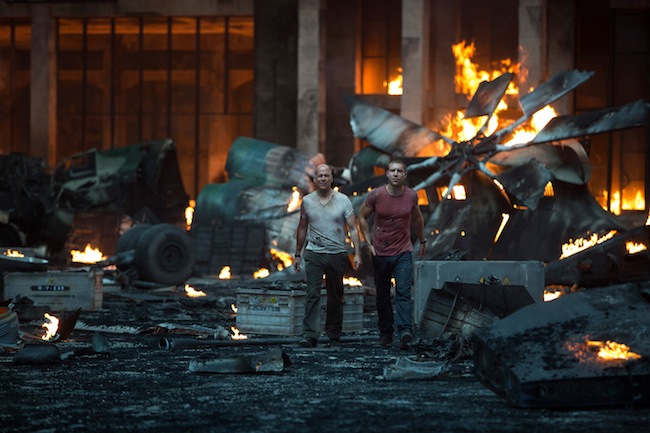 I wish I could say at least Jai Courtney brings something to the table in a film Willis only looks to be participating in because the paycheck he was offered was too big to turn down. However, his Jack McClane might be one of the least intelligent C.I.A. operatives I've ever seen in action and a new source of concern for me if this is the type of individual protecting the United States on this front. He constantly can't see obvious developments coming from a mile away, and, while I get that it's to make the case for age and experience over youth and strength, it certainly does no favors in ingratiating this new character to me, who needs to buy him as a credible and capable hero moving further. But in Courtney's defense, he could have actually gotten along with his dad by his side the entire movie. Willis is only there to fire off a few rounds as back-up most of the time, while tiresomely reminding us that he's "on vacation," which he's really not, because he went to Russia to... oh, nevermind. A John McClane who doesn't resemble the one I'd hoped to see again AND who is irrelevant in his own film? Check please.

A GOOD DAY TO DIE HARD is not only a bad film but a terrible DIE HARD. As a huge fan of the original and a defender of its direct sequel, it pains me that this is the direction the franchise has gone. But then again, all good things must come to an end, and, after this lifeless effort, it may be the right time for this series to die.