Greetings! ScoreKeeper here along with "they're" to let you know about a new vinyl soundtrack release directly from the creative folks over at Mondo. Ain't It Cool News has championed their über-cool limited edition screen-printed posters for so many years it looks like we're going to continue screaming about their new soundtrack label. While still in its infancy, Mondo (the record label) has managed to release some incredibly impressive titles: MANIAC (1980) by Jay Chattaway, THE BEYOND (1981) by Fabio Frizzi, and THE DEADLY SPAWN (1983) by Michael Perilstein.
Released exclusively on LP featuring traditional black vinyl regular editions and rare colored vinyl variant editions, these albums marry the same high-quality artwork Mondo is known for with the ear-elixir of film music.

On Friday, February 22nd, Mondo will release Jerry Goldsmith's POLTERGEIST (1982) featuring brand new album cover design by We Buy Your Kids (the Australian art duo Sonny Day and Biddy Maroney) which recently collaborated with Mondo on their latest gallery show, "Tina's Mom's Boyfriend" last November. While I've been lukewarm on the bulk of their work, I'm absolutely delighted with the cover they've designed for the POLTERGEIST album. I especially love the full-bodied specter featured in the cross-panel interior of the album.

I couldn't be more excited about this particular release. It's an incredible score by one of the true masters of film music. It contains additional tracks from the original LP released in 1982 and mirrors the CD that Rhino released in 1997. It's been completely remastered specifically for vinyl by James Plotkin and pressed on high-grade 180 gram vinyl. POLTERGEIST features two LPs and will fetch a price of $25. It will be available via their web site at MondoTees.com. The clear-vinyl variants will be randomly inserted amongst the regular black vinyl editions. As with all of Mondo's products, the exact time these albums go on sale will NOT be announced ahead of time. They will announce the precise moment the sale goes live via Twitter (@MondoNews). All three previously released albums sold out rather quickly and this one should be no different.

I've listened to the test pressings and the audio sounds absolutely incredible. I'm a tremendous fan of this score and while I was listening to it, I was amazed at how wonderful the music sounded on vinyl. I A/B compared it to the other digital versions I have of this score. I'm new to the vinyl collecting world and I'll never turn my back on CDs or digital formats, but I have to say, I'm completely sold on the push to own certain soundtracks on vinyl. The music sounds like it's coming from an ensemble of musicians sitting right in front you. I can't say the same about CDs. While digital formats indeed sound great, they don't sound natural. I'm starting to think it's analogous to practical effects over CGI. Perhaps CGI looks better, but it certainly doesn't feel like the object is actually there with the actors on screen like good old practical effects deliver.

If you don't own a single LP or are new to the vinyl world, POLTERGEIST is the absolute perfect title to get your collection kickstarted. Mondo plans on releasing more albums in the future (DRIVE by Cliff Martinez is coming out next) so the prospects are certainly exciting.


Here is the track listing and album artwork below: 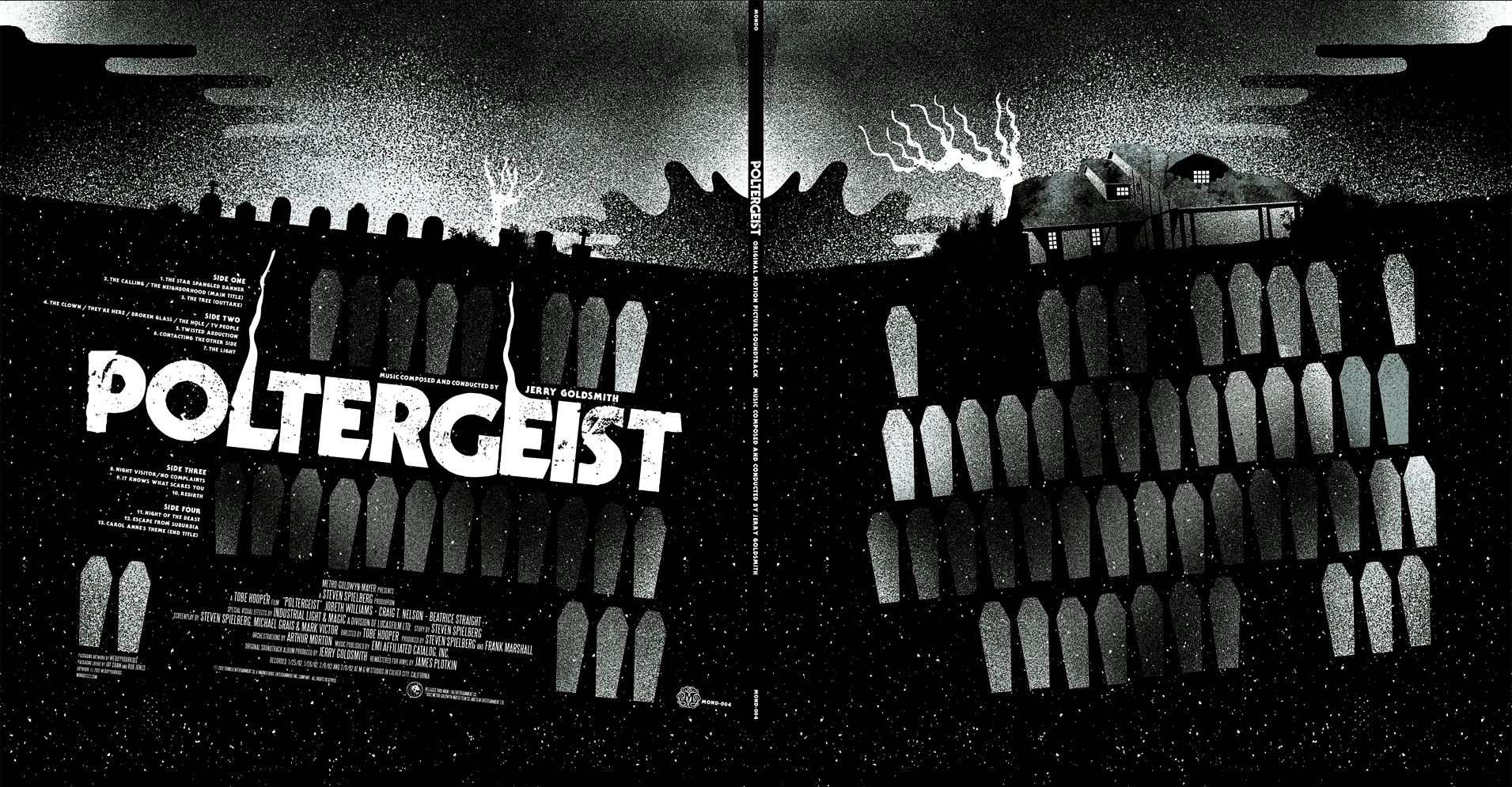