Eli Roth Gives You A Taste Of THE GREEN INFERNO!!

Roth took to his Tumblr earlier today to post the first image from the film, in addition to an official synopsis, which gives us a very general idea of how fucked this cast of characters is going to be when they find themselves stranded in the middle of nowhere with a cannibal tribe in the wings.

A group of student activists from New York City travel to the Amazon to protect a dying tribe, but crash in the jungle and are taken hostage by the very natives they saved. 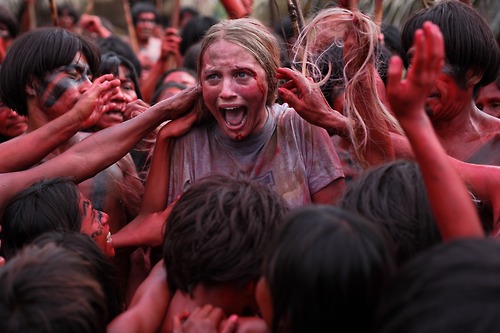 Is "You Will Get Served" really the tagline Roth is planning to use, as he does on his Tumblr?

Lorenza Izzo, Ariel Levy, Daryl Sabara and Kirby Bliss Blanton all star, with the rights still up for grabs both domestically and internationally at the European Film Market, which means no release date for you to mark on your calendar yet.