Terry Malloy Would Like To See Further Adventures From JACK REACHER!!

You know why I read JACK REACHER novels? Because they are pretty awesome action movies in novel form. Author/Creator Lee Child’s take on the archetype of the wanderer-hero is consistently entertaining, taut, fun, and reliable.

You know why I go see Tom Cruise movies? Because the guy doesn’t phone his work in. He brings the first fruits of his talents to just about every project he touches. He is consistently entertaining. One could call him… reliable.

And although the marriage of the Jack Reacher character with Tom Cruise’s physique is questionable at best, dubious at worst; the fact remains that JACK REACHER, opening this weekend, is a completed feature film...ready for the masses...and Tom Cruise’s name gets top billing. 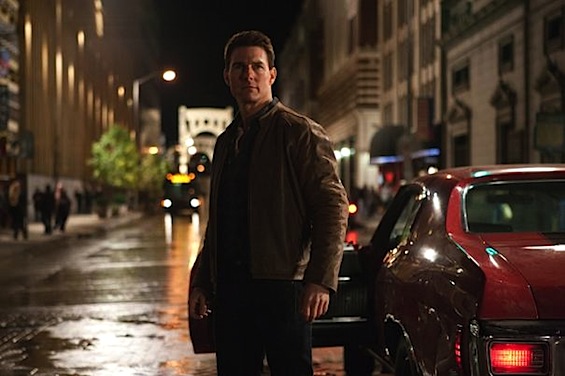 And other than the unavoidable fact that Tom Cruise simply doesn’t fit the physical description of the gargantuan Jack Reacher from the novels, the otherwise obvious pairing of consistently reliable thrillers to America’s go-to leading man is pretty obvious, and pretty successful.

This film is an adaptation of the Lee Child novel ONE SHOT, which is installment number 9 in a series of 17 books (and counting) featuring the Jack Reacher character. There is no denying that Lee Child has cooked up a wonderful central character for his action-thriller yarns. Reacher is the full package as far as action heroes go. 13 years as a military policeman gives him the experience and training that all good detectives and mystery solvers need. And his towering size makes him a formidable opponent in any physical altercation. And Reacher gets into a lot of those. But his size can also mask his genius as an investigator (big guys are all lunkheads, right?). All the Reacher novels I’ve read so far (4, including ONE SHOT most recently) have taken place after Reacher’s time in the Army. He walked away from the service and lives an a-typical life. He wanders, spends only cash, gives aliases everywhere he goes, and possesses nothing more than the clothes on his back. He’s a ronin. Or possibly more accurately, he is Bill Bixby’s Bruce Banner. He’s going to wander into your town, and somehow trouble is going to find him. He always does what is right according to his code, but you won’t like him when he’s angry.

In JACK REACHER, a shockingly horrific mass shooting via sniper rifle takes place in Pittsburgh. Within 16 hours the police have their suspect in custody and the evidence appears rock solid. The suspect is largely silent upon questioning, but writes down three words on a piece of paper: Get Jack Reacher. Sure enough, Reacher has already seen the news and arrives on the scene in dramatic fashion. The only hitch is that Reacher is preoccupied with burying the suspect rather than clearing his name. So why would James Barr (Joseph Sekura) ask for Reacher by name? Such is the set up for a pretty killer little murder-mystery-action-conspiracy flick.

Nothing in JACK REACHER is going to change your life. It isn’t the best action film of the year, and it won’t make many top ten lists. But I think longtime fans of the novels, who will have to move past the formidable obstacle of seeing Cruise in the role of their beloved bruiser, have a lot to enjoy here. And in some ways, the final product is so slick and polished that fans may ultimately have to thank Cruise for having an enormous hand in this film being made.

Cruise is the driving force here, from what I can gather. He is credited as a producer , along with his frequent collaborator Paula Wagner. Cruise producing and starring, from a beloved preexisting book franchise, gets a movie greenlit. But from that point on, the final product will come down to who Cruise and Co. find to helm their film. And they chose wisely. Christopher McQuarrie (THE USUAL SUSPECTS, THE WAY OF THE GUN) both adapts Child’s novel and directs and does a damn fine job in both roles. Having just read the novel, my take is that he remained quite faithful to the source while streamlining it in some of the smartest ways that good screenwriters do. The location is different, more iconic. Some characters disappear or get amalgamated into one another. Some montages cover what whole chapters spelled out. And really, that is what a real fan of the novels wants, right? You want the spirit of the character. You want the thrills you get as the noose tightens around the villains and as Reacher puts crook after crook in the hospital or worse. Cruise and McQuarrie bring you what you want.

So if I’m willing to say they bring what you want, that must mean I’m on board with the action, right? Yep, pretty much. There are some really fun action sequences here, from fistfights to car chases to shoot outs. 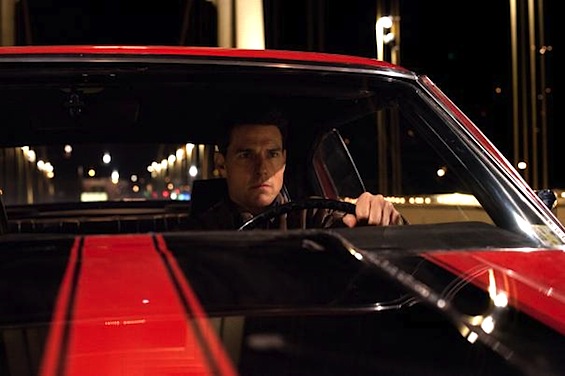 Some of these sequences are pumped up from what happens in the book. And some are a little frustrating and frivolous, feeling shoehorned to up the action-factor and remind us that this isn’t just a murder mystery. One particular fight towards the end of the film includes that moment where the hero and villain put down their guns so that they can duke it out, man to man. 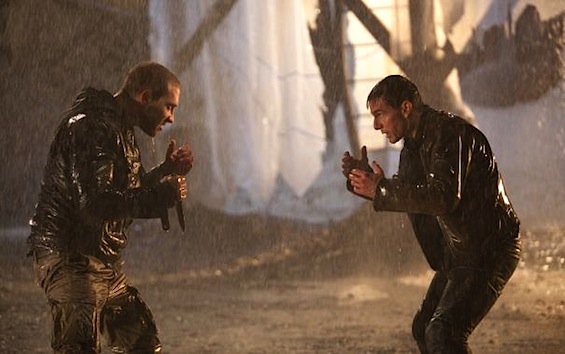 Although I think the fight sequence is awesome; Lethal and rain-drenched for maximum dramatic effect… it doesn’t feel like something Jack Reacher would do. It feels like action movie logic.

And as an action fan, I’m grateful for a good fight scene. But Reacher is too smart and efficient for a silly fight like that. Then there is a car chase which happens mid-film which doesn’t happen in the book at all. At first, I found myself a little annoyed at a “mandatory car chase” happening. But this is one of those moments where McQuarrie got to flex his adaptation muscles. The car chase adds a twist to it which sold the whole thing for me. Police are chasing Reacher, but Reacher is chasing the bad guys. It is almost as if the cops are a pesky aside to his real mission, and I really dig that cool confidence. So the car chase offers some plot progression, a little insight into Reacher’s relentlessness, AND ends up being pretty brawny to boot. I went from skeptical to impressed all in one big set piece.

I’ve also got to mention the cast, which really fill this thing out well. If Tom Cruise starring was frustrating to some geeks, almost all of those same people immediately re-upped their interest in JACK REACHER when they heard Werner Herzog would play the lead heavy in the film. And Herzog acquits himself well! Although The Zec features more prominently in the novel, Herzog is a perfect physical manifestation of this frightening relic of a bygone age of criminals. 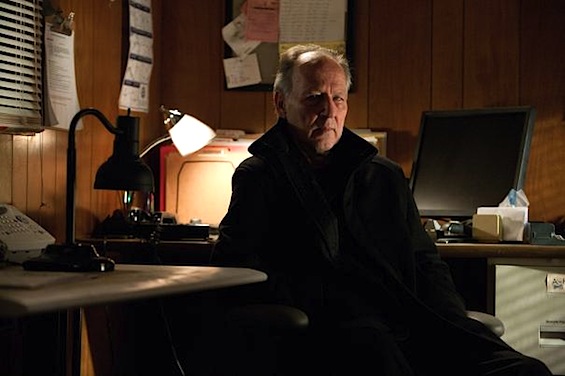 Rosamund Pike (WRATH OF THE TITANS) plays the defense lawyer Helen Rodin, who teams up with Reacher. I really like her screen presence. I’d love to see Pike rise above generic blonde female lead status, myself. Here’s to hoping she can pull it off. Richard Jenkins is kind of wasted here as the prosecutor (who is also Helen Rodin’s Dad), but he’s always amazing even if his character is trivial. Then you’ve got David Oyelowo (RISE OF THE PLANET OF THE APES) who is really good as the dick-ish Murder Investigator, but needs to be careful he isn’t always playing a dick-ish side character! And rounding us out, a VERY fun role for Robert Duvall to sink his teeth into. His Cash (a retired Marine sniper) is virtually identical to the character in the book and I couldn’t be more happy about that. He gets in a little on screen action and acts as a nice counterpoint to Reacher. He’s old and cranky, but still has an edge. If you dig Robert Duvall, I think it’ll be obvious to you that he is having a great time with this small role and his casting was brilliant.

The only question remaining is whether mass audiences will respond to this vehicle. Are we going to see the further adventures of Jack Reacher on screen?  Because one can virtually guarantee that if Tom Cruise can’t sell JACK REACHER to the world, then Lee Child’s creation is going to live on only in book form for the foreseeable future. Sure, Cruise’s casting has been controversial among fans. But pre-existing fans are only a small fraction of the audience needed for JACK REACHER to be a hit. The fact is MOST people, period, don’t know who Jack Reacher is. And Tom Cruise is the Jack Reacher that (hopefully) mass audiences are going to meet through this film. I think Cruise and McQuarrie have crafted an effective, if harmless, PG-13 action-thriller that has the potential to be the beginning of a fun and fruitful franchise.