Nordling Loves Returning To Middle-Earth In THE HOBBIT: AN UNEXPECTED JOURNEY! 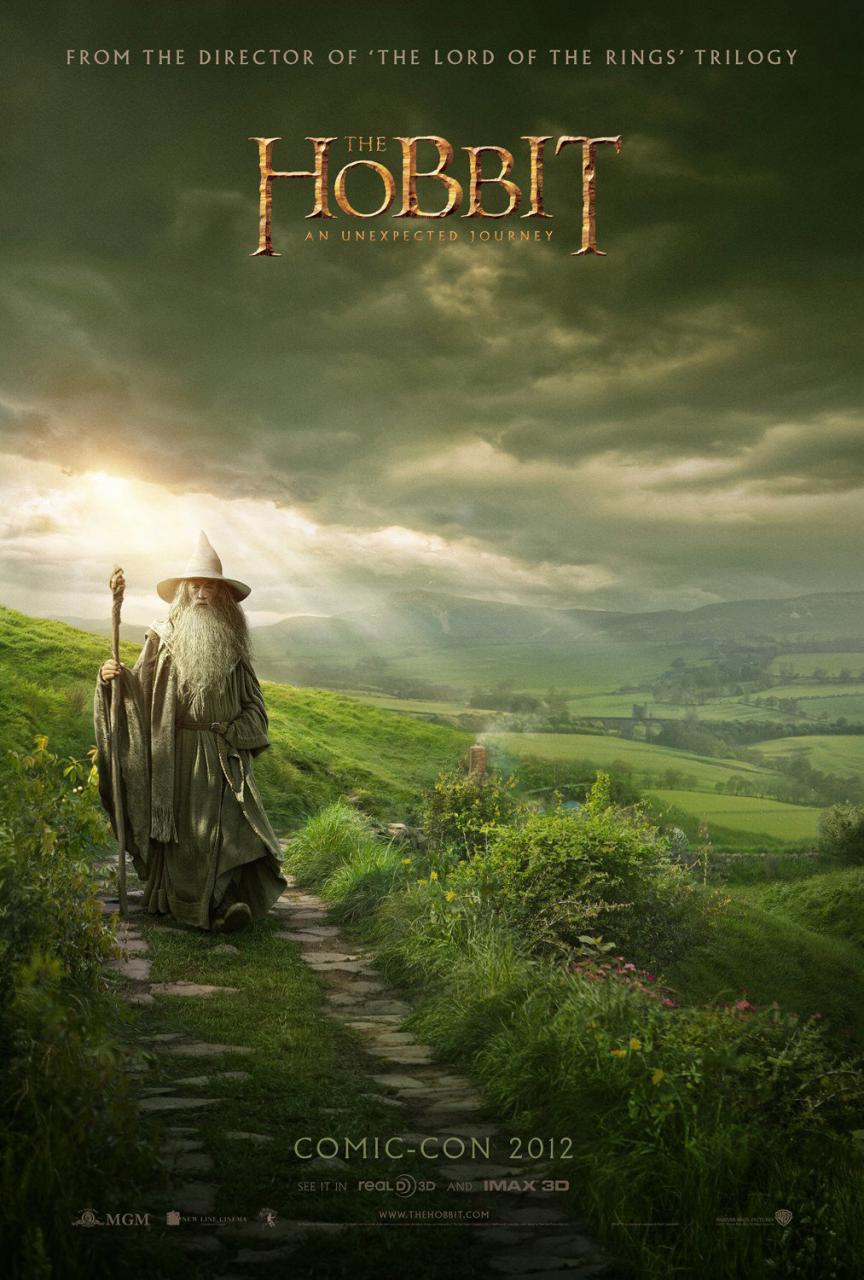 How much you enjoy Peter Jackson’s THE HOBBIT: AN UNEXPECTED JOURNEY depends on you.  I’ve read a few reviews now, and many of them say that it’s too long and too full of extraneous material.  Technically, I understand where they are coming from.  It is a long movie – almost three hours, and much of its running time sees Bilbo Baggins (Martin Freeman), Gandalf the Grey (Ian McKellen), Thorin Oakenshield (Richard Armitage), and the assortment of Dwarves getting into one scrape or another.  If you weren’t much of a fan of THE LORD OF THE RINGS, THE HOBBIT: AN UNEXPECTED JOURNEY certainly won’t change your mind.

However, I’m not one of those people.  I’ve watched the Extended Cuts of THE LORD OF THE RINGS so many times now that I’ve lost count.  I greatly love this world that Peter Jackson and the team at WETA have created for the screen, and coming back to Hobbiton to the dulcet tones of Ian Holm as Bilbo, telling the history of the Dwarves and Erebor, was like falling back into bliss. I found it very difficult to put my critical hat on when watching, and after a while, I simply stopped bothering.  What that means to you as an audience member I leave up to you.  Coming from a real place of love and admiration for these movies, I really thrived on the experience.

For those unfamiliar with the story – all four of you – this is the story of how Bilbo Baggins came upon that wonderful Ring and his adventures in Middle-earth.  THE HOBBIT is the prelude to the events of THE LORD OF THE RINGS, J. R. R. Tolkien’s epic war saga.  Thorin Oakenshield, with twelve other Dwarves, must reclaim the ancient kingdom of Erebor and recover their lost gold, which is now in the hands of the dragon Smaug (Benedict Cumberbatch). To do that, they need a burglar to figure out how to get inside the mountain fortress, and the Dwarves think they’ve found one in Bilbo.  But Bilbo is unused to adventure, and even a recommendation by Gandalf isn’t enough to convince Thorin.  But Bilbo comes along, and what he experiences will change him forever.  Meanwhile, the White Council senses that something is amiss in Middle-earth, and Gandalf decides to investigate matters while helping the Dwarves return to their home.

So yes, THE HOBBIT: AN UNEXPECTED JOURNEY feels a little smaller, a little more whimsical in comparison, and that’s appropriate.  None of THE LORD OF THE RINGS movies, for example, had a song about being careful with Bilbo’s plates and cutlery, all sung and performed by a plethora of Dwarves.  Certainly none of them featured a character like Radagast the Brown (Sylvester McCoy), a wizard so unaware of his own appearance that he has a stream of caked bird shit on the side of his face, as he investigates a rising dark power called the Necromancer in the forests of Mirkwood.  Radagast has his own sled pulled by rabbits, and talks to himself, and for many he might be a bit Jar-Jaresque.

THE HOBBIT isn’t so separated from THE LORD OF THE RINGS to render everything new – Jackson has taken great care to make sure that the world feels the same – but the stakes don’t feel as high, at least not yet.  This is a world that has not seen the real darkness of THE LORD OF THE RINGS, and I’m curious if future moviegoers can watch these movies in the proper order.  Considering how THE HOBBIT: AN UNEXPECTED JOURNEY opens, with Ian Holm telling his story while Frodo (Elijah Wood) prepares for Bilbo’s famous birthday party, most people will likely want to start at THE FELLOWSHIP OF THE RING and work their way through.

So was THE HOBBIT: AN UNEXPECTED JOURNEY worth the nine year wait?  I can only speak for myself in this regard - I happily sunk into those warm waters of Middle-earth again.  As usual in these movies, the performances help sell the verisimilitude, and Martin Freeman is pitch-perfect as Bilbo, a hobbit who enjoys the simple pleasures of food, pipe-smoking, and absolutely no adventures if he can help it.  But Bilbo also comes from a long line of more courageous hobbits, and when Gandalf decides to thrust Bilbo into adventure, Freeman gives the character a real spirit and spark.  McKellen falls back into Gandalf with ease – this time, the younger Gandalf is more uncertain of himself, and when he deals with the likes of Galadriel (Cate Blanchett), Elrond (Hugo Weaving), and Saruman (Christopher Lee), Gandalf is very much a lesser power.  I always found Gandalf the Grey a more interesting character than Gandalf the White, and McKellen’s return to the role is welcome.

Andy Serkis’ Gollum also returns, and the Riddles in the Dark scene between Gollum and Bilbo is probably the best scene in the movie.  Gollum isn’t quite the desperate schemer he is in THE LORD OF THE RINGS.  Here, Gollum is at the pinnacle of his existence; with the Ring in his possession, Gollum happily lives in his cave eating fish and any unfortunate goblins that come his way.  Jackson, Boyens, Walsh, and Guillermo Del Toro’s script wisely sticks very close to Tolkien’s work in this scene, as it was probably the best written moment in the entire novel.  As for the CGI, it’s flawless – Gollum may as well be real at this point.  With Serkis’s performance and the motion capture technology, Gollum really is one of the most compelling characters ever created.

The performances are excellent across the board.  Richard Armitage’s Thorin, like Boromir in THE FELLOWSHIP OF THE RING, is actually improved in the transition from book to screen.  Armitage brings nobility and passion to Thorin, and when his honor overrides his good sense, you understand where he is coming from, even if it leads to some poor decisions.  We also learn why Thorin is called Oakenshield, through an intense battle sequence.  Some of the padding that Jackson uses to fill the story into three films feels a little extraneous, but not this sequence and Armitage carries himself admirably in the role.

We don’t really spend as much individual time with the other Dwarves, but Balin (Ken Stott) stands out a bit more than the others.  Perhaps in future films we’ll get more of the other Dwarves’ characters, but the fact is that it’s a bit difficult, even in a movie as long as AN UNEXPECTED JOURNEY, to spend much quality time with them.

As expected the movie looks spectacular, with New Zealand again making Middle-earth feel like a real place.  The CGI has improved exponentially since the original movies, but that comes with a price – at times, there’s just too much of it.  It’s especially noticeable in 48FPS, where everything is given a strange ethereal look to it.  It also doesn’t help that the quality changes throughout the movie – the Goblin King (Barry Humphries) looks straight up CGI, while the formidable Azog the Defiler (Manu Bennett) looks, well, real.  So do many of the other creatures that inhabit Middle-earth.  But there’s so much of it that it feels a bit overwhelming.  One battle sequence, full of sight gags that audiences will really enjoy, probably wouldn’t be possible without CGI, and it’s one of the most fun battles in all of the films.  Another, with two mountain giants fighting each other, feels truly epic and made me curious to know what a kaiju movie from Peter Jackson would look like.

A few words about 48FPS.  I’ve seen THE HOBBIT: AN UNEXPECTED JOURNEY twice now in this format, and this weekend I’ll be seeing it in good old-fashioned 2D.  48FPS takes some getting used to.  It’s so aesthetically different from film that many will flat-out reject it.  I’ve always thought that there was something magical about 24FPS, something tactile and soothing about it, even in old 35MM.  48FPS in its way has a more striking palette; everything is sharper, there’s very little motion blur, and gives everything a weight and a movement that comes close to reality, or at least as close as it can.  But it also has the effect of making sets look more like sets, and even outside shots have a strange disconnect to them.

Perhaps it’s because we’re not used to it.  In 3D, the images are much more pronounced – Gollum really feels “there” this time in a way that he never really felt before.  It’s almost as if 48FPS brings CGI into a kind of reality.  The problem is, it’s not reality - it's obviously CGI.  Sometimes it works, like in the work with Gollum.  Sometimes it just makes what isn't real even more fake-looking.  I’d really love to see this technology used, perhaps in just a regular action movie that’s not so full of computer-enhanced imagery, to see what it would look like.  I recommend seeing it in this format at least once to decide for yourself, but it is jarring.  For the first few minutes, everything looks like it moves faster than normal, but it’s because there’s no blurring anymore.  After a while, I got used to it.  The format does make landscapes pop, and more than any other 3D before it, I really felt the depth of scope on the screen.  When we’re looking down a hall in Bilbo’s house, it really feels like a hallway, with a real distance to things.  And I’ll also say this – it felt like there was very little eye strain in seeing THE HOBBIT: AN UNEXPECTED JOURNEY in 3D, much less eye strain than in a normal 3D movie.  If they can just make sure the screen is bright, perhaps this technology will become the new normal.  But I suspect that this will simply be one way to see a movie, and won’t replace good old-fashioned 24FPS.  Time will tell.

THE HOBBIT: AN UNEXPECTED JOURNEY is long, full of fat, and I loved every moment.  Whether or not you’re passionate about these movies makes a difference; if you’re like me, you’ll happily spend hours in this world.  If not, perhaps you’ll feel the length more acutely.  If THE HOBBIT: AN UNEXPECTED JOURNEY is bloated, it’s bloated in the way you feel after Thanksgiving dinner, spending time with old friends, enjoying the company and laughing at every story.  I anticipate that the next two films will feel much the same to me, and I’m happy that I get to spend time in this wonderful world again.