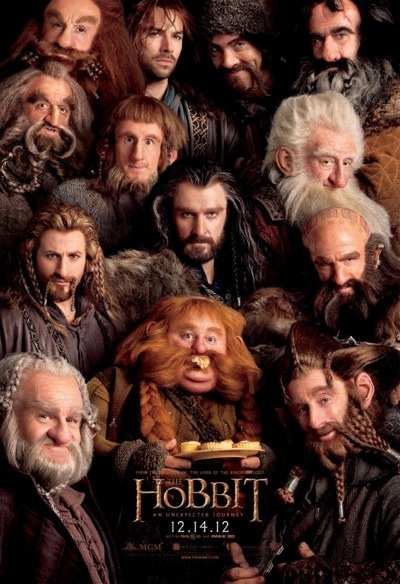 With THE HOBBIT: AN UNEXPECTED JOURNEY, Peter Jackson has set himself the bizarre challenge of returning to the site of his magnum opus to tell a smaller-in-scope tale via the use of cutting-edge technology (i.e. 48-frames-per-second 3D). It's a lot to reconcile. As the film sprints through its chaotic prologue, narrative coherence takes a backseat to high-definition visual wizardry; it's a bewildering barrage of footage that looks either spectacular or gallingly fake. But then Jackson's virtual camera plunges deep into the fully-digitized Lonely Mountain to reveal the discovery of the Arkenstone, and suddenly the alleged game-changing promise of AVATAR has finally been realized. What's real and what isn't? I haven't a clue, but it looks amazing. This is the future of event filmmaking, and the possibilities for a director of Jackson's talents to explode it are seemingly endless.

But there are kinks to work out. Many, many kinks. So many that I wonder if Jackson wishes he could've delayed shooting AN UNEXPECTED JOURNEY another year while they figured out how to eliminate the occasional and terribly distracting undercranked effect of actors zipping around like coked-up Mack Sennett characters. Also, while the clarity can be awe-inspriring, it has a tendency to make the sets look cheap, the armor chintzy, and the makeup barely worthy of an Asylum production. AN UNEXPECTED JOURNEY in high-frame-rate 3D is a deep, vicious pendulum swing between transporting and flat-out unwatchable - and it's impossible to fully adjust to the format because you never know when it's suddenly going to look like a demo reel.

Would I feel differently had I viewed the film in standard 24fps 3D? Well, jarring tech hiccups aside, I'd still have to contend with the interminable first act, which left me feeling like I was watching the biggest artistic miscalculation from an elite filmmaker since SKIDOO. So probably no.

The brilliance of Jackson's LORD OF THE RINGS trilogy is the degree to which he streamlined a digressive, detail-laden narrative in order to connect with mainstream audiences, who previously considered high fantasy the province of twenty-sided-die-rolling nerds. He gave Tolkien's expansive stories an earthy, tactile immediacy that stood in stark contrast to the lifeless CG environs of THE PHANTOM MENACE. Though the visual f/x now show their age (as visual f/x tend to do with depressing rapidity), Jackson's films still pulsate with the defiant charge of a director out to prove an entire industry wrong - and, while he's at it, make a cinematic epic for the ages.

AN UNEXPECTED JOURNEY is the work of a filmmaker who's up against nothing but his own judgment. He's the final-cut master of Middle Earth on film, so what he says goes - and what ensues is often akin to a paragraph-by-paragraph recreation of the book. The first colossal misstep is Jackson's baffling decision to film the dwarf dinner at Bag End in what feels like real time. This is the classic call-to-adventure scene in which Gandalf (Sir Ian McKellen) goads Bilbo Baggins (an overly mannered Martin Freeman) into joining Thorin (Richard Armitage) and his band of twelve dwarves on a quest to take back the Lonely Mountain from the dragon Smaug. This is where it becomes painfully apparent that Jackson is stretching a 300-page story well past the snapping point; the dwarves' bits of comedic business are uninspired (tossing around valuable plates, scarfing down whole wheels of cheese, etc.), Gandalf feels like a spectator, and the solemn intoning of "Misty Mountains" stops the film cold. It could be that Jackson's trying to introduce too many characters at once, but he commits the double sin of failing to make the most important members of the crew memorable or vital to the story. Balin, Fili, Kili, Dwalin... unless you know the story well, they barely register.

Almost every incident in the first chunk of Tolkien's novel is dramatized with the same exacting detail (with a few embellishments thrown in), which means the author's penchant for anticlimax is dutifully honored (particularly in the outfit's encounter with three very hungry and stupid trolls). While Jackson was able to invigorate Tolkien's staid, travelogue storytelling in his LORD OF THE RINGS films, he really sinks the viewer into the doldrums of journeying here. It's probably worse if you know where they're going, especially when you're aware there's a load of exposition to wade through once they reach Rivendell. And while it's lovely to see Galadriel, Elrond and Saruman (god bless you, Christopher Lee) again, they're only present to provide exposition.

Fortunately, the film perks up once the party leaves Rivendell (apologies to Sylvester McCoy for failing to mention his lively, but utterly superfluous appearance as Radagast the Brown). The first true jaw-dropper of a set piece arrives when Bilbo and company find themselves caught in the middle of a boulder-chucking brawl between a few Stone Giants. Though the sequence does nothing to move the story along, it at least brings the literal sturm-und-drang that the film has been lacking. I have no idea how it plays in 24fps, but in HFR 3D, it looks like real freakin' mountains going all WAR OF THE GARGANTUAS on each other. I hesitate to say it's worth the heightened ticket price, but I'm certainly glad I saw this sequence in its intended format.

I don't know if it's a question of shaking off rust, but once Jackson plunges the party into the Misty Mountains, he roars back to life as a filmmaker. Crosscutting between Gandalf and the dwarves battling a never-ending legion of goblins (led by their grotesque, testicle-chinned king) and Bilbo matching wits with a pathetic little fella named Gollum (Andy Serkis and WETA remain the best show in town), Jackson finds a groove and stays in it for the duration. But this is also where you're reminded of the limited emotional resonance of THE HOBBIT. Aside from Bilbo sparing Gollum, there's not much here to spring the waterworks. This is all prelude to the big opera of THE LORD OF THE RINGS. It's a fine story, sure, but this is just the first act of a book that can easily be read in a couple of sittings.

And therein lies the potential problem with the next two movies. AN UNEXPECTED JOURNEY runs a healthy 160-plus minutes, and more than half of it is filler. Worse, I know goddamn well there's not 320-minutes worth of story left. Not even close. If I felt like Jackson was attacking this book with the all-in bravado he brought to THE LORD OF THE RINGS (and setting up more than Tolkien's book delivers), I'd forgive the bloat. But the listlessness of AN UNEXPECTED JOURNEY reminds me of the slow boat to Skull Island in KING KONG. We're adrift. So please, Mr. Jackson, wrap this up, and get the hell out of Middle Earth. This is beginning to feel more like cartography than storytelling.