There are only a few films in this countdown that haven’t been released yet. To make it on the list, the film had to be pretty special, since I know it’s frustrating not being able to see the film in order to verify whether or not it deserves to be ranked as such. But HAROLD’S GOING STIFF is one of those special films. Though it’s not high on scares, it does deal with zombies in a wholly new, wholly heatfelt way. Much like last year’s TROLLHUNTER, it makes something altogether goofy feel real, but unlike that film which uses the found footage motif, HAROLD’S GONE STIFF goes the mockumentary route, in doing so it feels all the more real as the heartbreaking evens unfold. This film touched me and I’m not afraid to show the court where on the doll where it did. I reviewed this gem back in January. Surprisingly, the film is still touring fests, but one of these days, someone will pick this comepltely unique film up for all to see. When that happens, I’ll most definitely let you know. 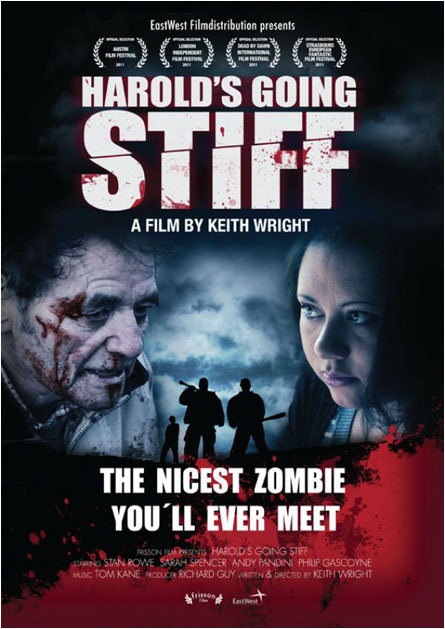 I hear your complaints about zombie films, but with the subtitle of this column being “Zombies & Sharks”, it’s kind of hard not to give them coverage here on AICN HORROR. Like a lot of you, I’m getting sick of all of the zombie films out there with zero creativity and production value. That said, I don’t want to call a moratorium on watching zombie films because I know that if I do, I’d miss films like HAROLD’S GOING STIFF. Though the title may make you think we’re about to venture into porn territory, HAROLD’S GOING STIFF couldn’t be further from it. I think it’s safe to say that HAROLD’S GOING STIFF is going to be one of my favorite horror films of the year. 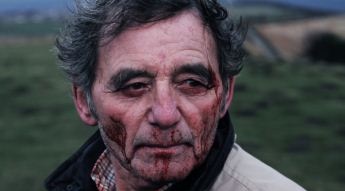 Harold is an elderly man suffering from a neurological epidemic called ORD (Onset Rigors Disease) spreading across Europe which begins with stiffness of the joints, then spreads to full on violent dementia. Because the culture has been so saturated with the films, these stiff-jointed madmen have been dubbed zombies. While scientists race to find a cure for the disease, vigilante groups have taken it upon themselves to take care of the zombies to prevent an apocalypse. HAROLD’S GOING STIFF depicts the life of Harold as he copes with his illness and forms a relationship with his nurse/physical therapist.

Filmed as a mockumentary, director/writer Keith Wright blends humor, drama, and horror to make one of the most unique and original zombie horror films I’ve ever seen. Wright doesn’t focus on the gore or the violence; rather, he rests his camera on Harold (played by the genuinely wholesome Stan Rowe) and Penny his nurse (played by the plucky and resilient Sarah Spencer). You can’t help but care for these two characters as we see them struggle with all the highs and lows of someone suffering from a debilitating ailment. These two characters are as endearing as can be, with Harold’s soft spoken pleasantry perfectly complimenting Penny’s vibrant optimism. As Penny’s therapy begins to work with Harold, I found myself rooting for both of these characters to conquer this disease. 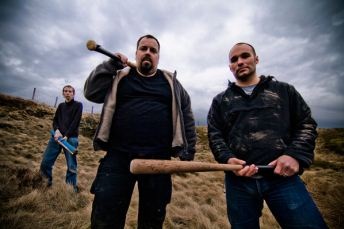 The film cuts from this heart-warming friendship to follow a doctor who is dedicated to finding a cure, two workers at a volunteer shelter who are caring for ORD sufferers in the latter stages of the disease, and a trio of bumbling yet homicidal vigilantes offering a clear and expansive picture of how this disease has been effecting the UK society. The trio (played by Andy Pandini, Lee Thompson, Richard Harrison) work somewhat well together. One’s a brute, one’s an idiot, and one’s the leader who may be having some doubts about this mission. Again, unlike other zombie films, Wright takes his time to give these characters multiple layers, showing the good and bad parts, and allowing the audience to be sucked into their story.

I love every aspect of this film. Like all of the best zombie films, it actually has something to say. I took it as a metaphor for the treatment of the elderly in society—shunning them, outcasting them, shuffling them off to some facility to be forgotten and mistreated, and eventually deciding ourselves when to put them down. As Harold’s illness worsens, he is taken advantage of and manipulated by the “villains” of this film. Being the person he is, Harold softly sits by and takes the abuse, with Penny being his only supporter and true friend. 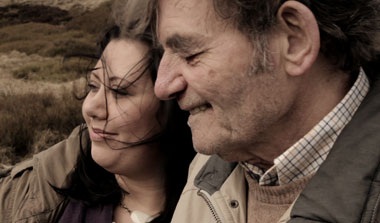 Though the themes may be heavy, I laughed out loud numerous times at HAROLD’S GOING STIFF. There are genuine moments of sheer and innocent joy between Harold and Penny. The bumbling vigilantes are often hilarious to follow as well; all of it captured in a documentarian style that adds to the hilarity. Like TROLLHUNTER, it follows this absurd subject matter convincing you that this is truth on film. Unlike TROLLHUNTER, this is a much more down to earth film, relying less on epic thrills and more on resonating heartwarming/heart wrenching moments.

At the moment, HAROLD’S GOING STIFF is touring the festival circuit. Stay tuned to AICN HORROR for more info. I will definitely let you know when this film is available for more people to enjoy. Trust me, and just put this film on your radar. It is sure to please.

Much like HAROLD’S GOING STIFF, INCIDENT AT LOCH NESS tries to make everything look real. I love this small scale battle between one artist’s integrity and the influence of a major studio, as Zak Penn tries his damndest to make a big budget monster movie out of Werner Hertzog’s exploration of the Loch Ness myth. Though I had problems with the second act, every moment Hertzog is on screen is gold. Like HAROLD’S GONE STIFF, it’s not meant to be a spine tingling thriller, but a new and interesting way of exploring things that inspire scares.


See ya tomorrow, folks, with number 3 of the best of the best covered in AICN HORROR since last year!