Though it is a film that it just touring the festival circuit, I had a chance to see an early cut of THE BUTTERFLY ROOM and reviewed it back in June. The film blew me away with some breathtaking performances from some of horror’s most famous heroines as well as a standout performance by Barbara Steele in a role that seems made just for her. The levels of sublime evil this film goes to is fascinating and the way the tension ratchets its way tighter and tighter secures this film high on my list for the best of the year. As the release of THE BUTTERFLY ROOM grows closer, I am jumping with anticipation for more folks to experience this devilish film. 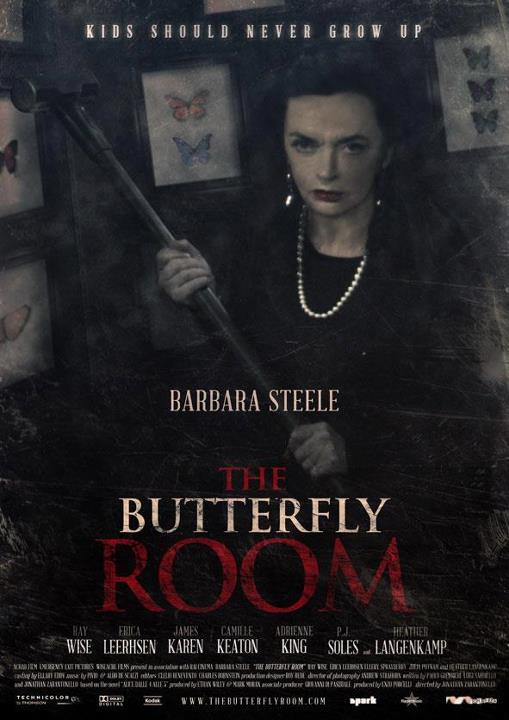 I’m going to tell you right now, put THE BUTTERFLY ROOM on your must see list. It will most definitely be on my Best of the Year list and I feel the need to shout from the rooftops in support of this indie surprise starring some of the greats of the horror genre.

Mothers have always been a great topic of horror to explore. Be it Faye Dunaway’s evil matriarch in MOMMY DEAREST, Norman Bates’ mom in PSYCHO, or even the creepy mother of two rapist bastards in MOTHER’S DAY, a mom gone wrong is something that always can get under our skins as an audience. Throwing her hat into the mix as one of the all time bad moms is legendary actress Barbara (BLACK SABBATH, PIT & THE PENDULUM) Steele who plays Ann, a seemingly harmless elderly lady living by herself in an apartment complex. By day, she keeps busy cleaning and going on walks, but in the room in the back of her apartment, scary goings on go on and as Ann reaches out to take care of a neighbor’s daughter while she is away, the secrets of The Butterfly Room, a room which has never had a man in it and never will according to Ann, are about to be revealed. 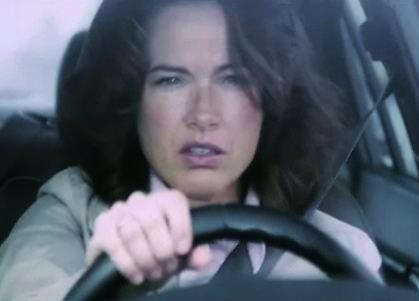 THE BUTTERFLY ROOM sports a cast of horror heavies the likes of which we rarely see. A NIGHTMARE ON ELM STREET’s Heather Langenkamp plays a protective mother with ties to Ann’s past. Erica Leershen (TEXAS CHAINSAW MASSACRE, WRONG TURN 2, BLAIR WITCH 2) and Adrienne King (Alice, the counselor who lopped off Mrs. Voorhees’ head in the first FRIDAY THE 13TH), play mothers as well, as does HALLOWEEN & CARRIE’s P.J. Soles and I SPIT ON YOUR GRAVE’s Camille Keaton. Rounding out the cast is James Karen (RETURN FO THE LIVING DEAD) and Ray Wise (making his second appearance in this week’s column, this time as a nosy handyman). All of these performances are fresh in this film and makes you wonder why these actors and actresses haven’t worked since their iconic turns in these iconic films.

Aside from gathering a cast to die for, director Jonathan Zarantonello creates an entire fascinating world revolving around Barbara Steele’s Ann. The apartment complex she lives and does her evil deeds in lives and breathes. The intimate close-ups of Ann working on her butterfly collection bring the viewer in uncomfortably close to this bizarre world where beauty is trapped, pinned down, and put on display. The metaphor of butterfly collecting is not an impenetrable one; rather it supplies a fantastic and creepy springboard to bounce Ann’s twisted emotions from. Though it is clear early on that something twisted is going on with Ann, even when the shocks are revealed, they tend to resonate harder than expected.

Zarantonello also takes some interesting and inventive steps in regards to the industrial beat-filled soundtrack and the leaps forward and backward in time in the narrative. Though this is often a surefire way to lose the reader, Zarantonello is able to lead us along, mainly by focusing always on Steele’s Ann character as the touchstone by which all action in this film stems from. A lesser director would have lost me as a viewer, but Zarantonello is far from a lesser director.

But this is all Steele’s show. In every frame, Steele exudes power and was even able to pull some sympathy from me as the viewer, even after we see her doing evil deeds. We are with her the whole time as she tries to cover her tracks, reaches out and connects with others, and gets burned for doing so causing her to fight back. Hers is a complex role which is able to ascertain both sympathy and revulsion and Steele hits every note with elegance and charisma.

I can’t recommend this film more and I can’t wait for more of you to see it so I can dialog about it with folks. It is definitely one of the best of the year in its complex narrative and masterful performances all around. THE BUTTERFLY ROOM is one of those films which taps into the simple horrors: the horror of harming a child, the horror of love not returned, the horror of betrayal, and the sheer horror of becoming exactly like ones’ parents. And it does it so, so very well.

For today’s alternate pick, we might as well go back to one of Bava’s first and best films, the altogether ooky ghost/vampire/witch film BLACK SUNDAY which mixes old school scares with gore that would make the Italian filmmaker famous one day. Barbara Steele stars and commands every scene she is in, as she does in BUTTERFLY ROOM. Check out my retro-review of BLACK SUNDAY here. For some sometimes charmingly hokey, sometimes wickedly gory jolts, seek out BLACK SUNDAY this Halloween season.

See ya tomorrow, folks, with number 4 of the best of the best covered in AICN HORROR since last year!