In Defense Of The MATRIX Sequels 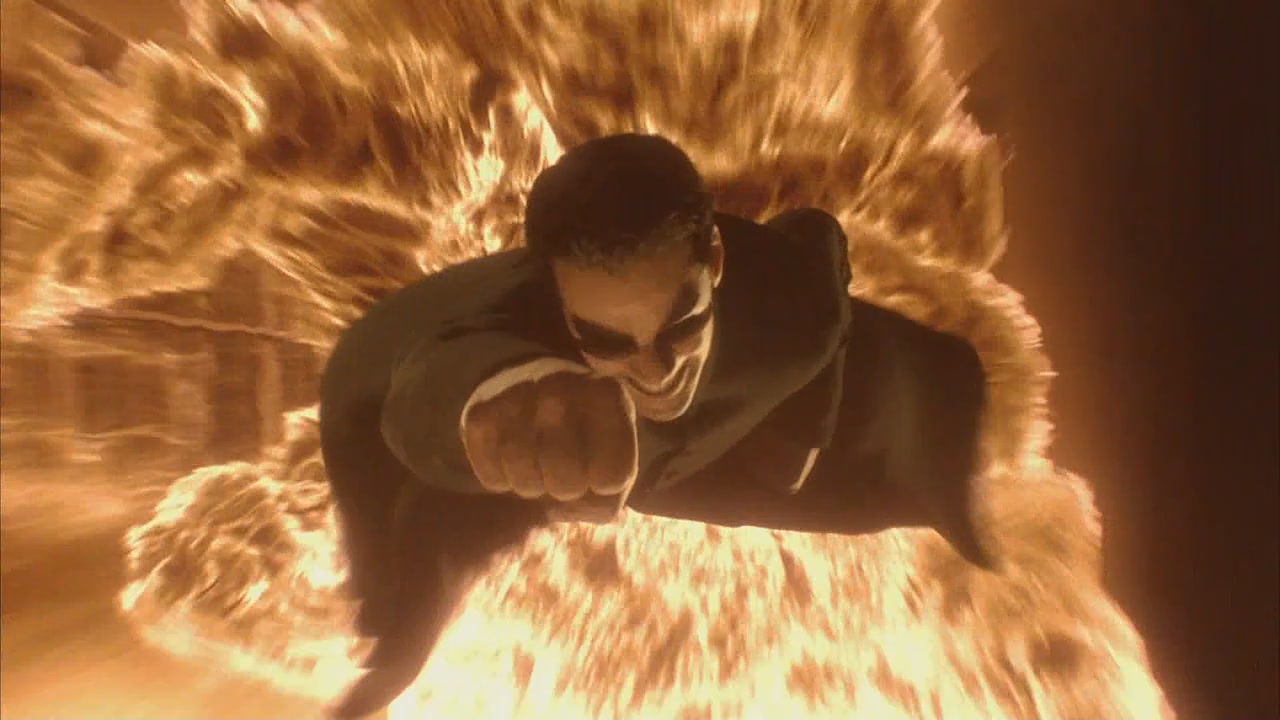 Let's get this out of the way first - do I think THE MATRIX RELOADED and THE MATRIX REVOLUTIONS are perfect movies?  Hell no.  Not a chance.  There's way too much fat on both these movies, and they have probably too many characters for their own good.  Accusations, I might add, that could be made against the Wachowskis' and Tom Tykwer's CLOUD ATLAS, and have been made already by other critics.  I forgive a lot when filmmakers are trying to make a thematic point, but even I have to struggle during the Zion rave sequence.  For one thing, many of those are freed from the Matrix, and I can't help but think a good half of those people were in their former lives trapped behind a computer monitor, inert and rhythmless, before being freed, judging by their dancing.  To intercut that with a love scene between Neo and Trinity, well... yeah, that was pretty disastrous.

Yes, they have issues.  I'm perfectly willing to accept that.  I think the Kid is pretty much a waste of a character, and his one bright shining moment isn't nearly enough to justify that annoyance.  For a group of people trying to lead humanity out of bondage, the Council is pretty much worthless.  Lock, as the war general, actually makes quite a bit of sense in the context of what's going on, and he's undercut at almost every turn, by the Council, by Morpheus, and by Neo.  I understand the need to introduce new characters to a science fiction saga like this, of course, but most if not all of them are mere distractions from the Neo/Morpheus/Trinity/Smith story, which is what made the first movie so compelling.

So if we're going to take a fine-toothed comb to these movies, we're going to be doing an awful lot of hair-pulling.  THE MATRIX gave us so many ideas in its running time that we were all dying to see more of this universe, and the Wachowskis complied, but they did so in such a manner as to disappoint the massive fanbase of the first movie.  Except... I think the fanbase had pre-conceived notions about what the sequels would (or should) hold, and failed to realize an essential point.

The MATRIX Trilogy is an anti-war trilogy.

It might not have started that way, but something important happened between the first movie and RELOADED.  September 11th, and the ramping up to the war in Iraq.  The portrayal of Muslims as "the other."  The rampant xenophobia and the isolationism that set in.  We can rattle off political outlooks all day and never get any closer to understanding each other or our viewpoints, and do it with a complete lack of empathy or willingness to at least step in each other's shoes for a minute, and I think the Wachowskis knew exactly what they were doing when they started shooting these movies back to back.  Even in THE ANIMATRIX, with "The Second Renaissance," these new ideas about the world of the Matrix are introduced, and that this is more than simple man versus machine, that there are metaphors being used here that make this world a bit more complicated than even the first film showed us.  Perhaps the Wachowskis didn't stick the landing in the way fans would have wanted, but I have no doubts that the message they conveyed was absolutely what they intended.

And I think it still rankles people.  I think that many people wanted Neo to defeat the machines, to free everyone, and all of humanity would rise from their underground realm into a world of sunshine and rainbows.  To quote Samuel Jackson, "I'd like that. But that shit ain't the truth."  In the world that THE MATRIX RELOADED opened in, we were wounded, hurting, and wanting to strike out at those who hurt us, never making the leap in trying to understand why these horrible things happened to us.  Just simply, why?  Not to place blame, or to find fuel for our revenge, but just to understand.  Too many people mistake the need to understand as some sort of an olive branch to the enemy.  And so comes THE MATRIX RELOADED, which sets the stakes - the machine world is a bit deeper and more complex than we were led to believe.  Even the Oracle, a being who humanity trusted implicitly, turned out to be another program - in fact, one of the very programs that helped build the Matrix itself.  It is a kind of betrayal, and the idea that there were forces in the Machine World that wanted to see humanity freed as much as humanity did suggested that perhaps things aren't so black and white as they seemed in the first movie.

And yet, I think that the Wachowskis do something brilliant here - they feed us more when it comes to the battles, giving us what we want, trying to sate our bloodlust, but they do it in a subversive way that I think does a fly-by over much of the audience at the time.  These battles, while visually amazing, don't amount to anything.  I'm quite certain that was intended, too. 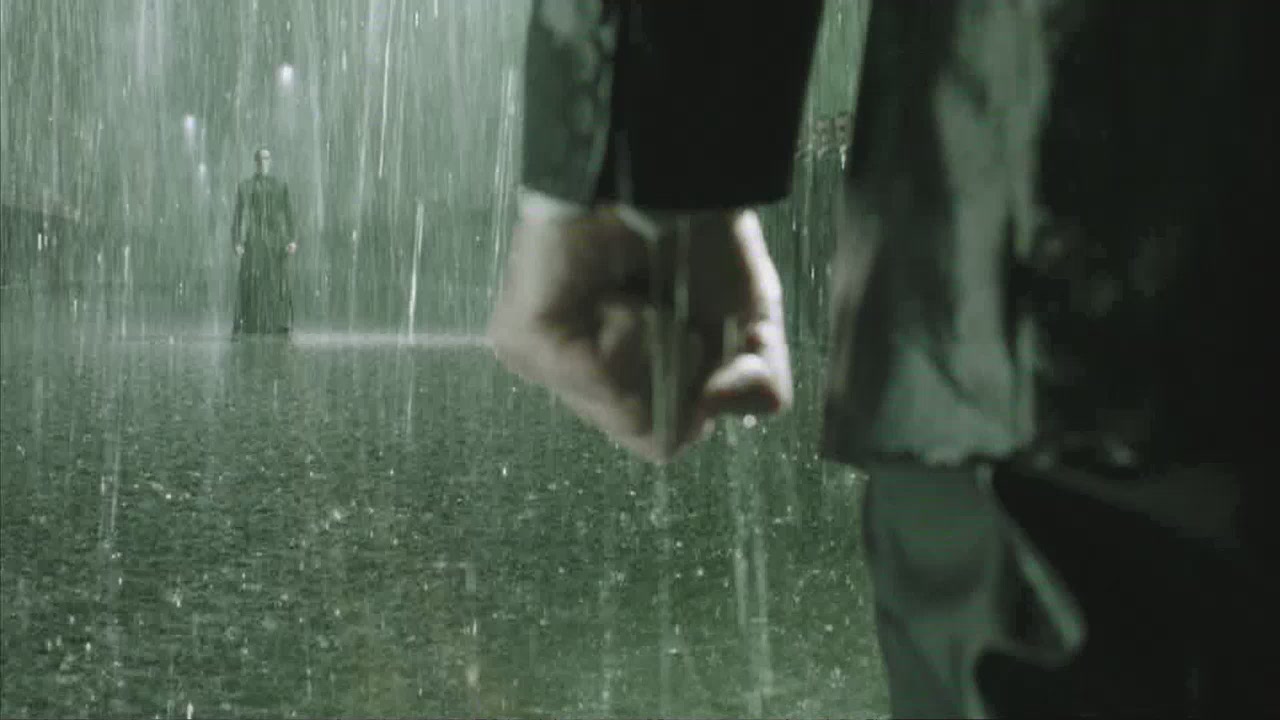 Ever notice that the many fights in the MATRIX sequels really never had any winners or losers?  We get our first taste when Neo faces off against some new agents.  "Upgrades."  And they fight, with that terrific choreography that these movies are known for, but it's merely to buy time for the other humans to escape.  Even when Neo briefly fights Seraph, it is merely a test - there is no resolution.  This becomes a pattern, not only in the Matrix but in the real world as well.  The action scenes are wonderfully directed, with terrific pacing and choreography, and none of them change a thing.

Every combat becomes a stalemate and any victory only lies in either surviving it or escaping it.  When Neo faces off against the Smiths in RELOADED, it may have seemed cool at the time, but as a whole it was pointless (except for progressing the plot a bit).  Neo couldn't win, and Smith couldn't consume Neo.  It was an impasse.  What was Smith?  Was Smith supposed to represent our own self-destructive tendencies, our need to keep fighting.  Neo fought Smith because that's what he does.  But he, at this point in the movie, doesn't question why.  As the Oracle tells us, "We can never see past a choice that we don't understand."

Even the preparations for war by the humans were nothing more than delaying the inevitable, as Lock would remind Morpheus and the Council.  And when Neo discovers the truth from the Architect - that they are as trapped as they ever were, stuck in a loop of constant conflict and war which they will never escape, Neo chooses to save Trinity over continuing the war, even though it meant that humanity would not survive.  Humanity has always known war, from the very beginning when we figured out that rocks can not only make great tools but can bash the other guy's head in quite effectively.  We depend on war to exist.  Neo tries another way.

At this point, at the end of RELOADED, I think much of the audience was caught offguard - not at the cliffhanger ending, but the true themes and meanings of the movie.  Sure, the fight scenes were cool, but what did they mean?  And the answer is an uncomfortable one.  Is conflict our natural state?  What does it mean not to fight?  Can we exist as human beings in a place where there is no conflict, and how are we defined by that?

Once we meet Rama-Kandra at the train station, Neo is sturck off guard like we are - these programs feel love, for themselves and their child Sati.  How can this be?  And it becomes apparent that these programs are just as trapped as the humans are - in constructs created simply to hold them to their purpose.  I think the casting of these actors was no accident - especially in regards to their race.  Perhaps audiences weren't prepared to deal with or understand what this scene meant in the larger scheme of things, but I think it's perhaps the most important scene of the movie.  They cannot be your hated enemy if, for a moment, you begin to empathize and understand them.  And in that moment, Neo begins to see the larger perspective, beyond his own, and I think the Wachowskis were hoping we would as well.

It beame apparent after that scene, that this was not a movie about winners and losers - no, what the Wachowskis were trying to do was to posit a tale in which war actually ended, with perhaps a chance of a deeper understanding between enemies - that there just might be another way.  For the machines, the endless war becomes a trap - for the programs inside who will never know anything but the world that they are also trapped in, and their lack of understanding for anything outside their realm meant they would never know.  Trapped by their own rules.  As for humanity, they would forever be struggling in war, never allowed to grow outside of it, never allowed to do anything else but prepare for death.  It was a horrifying world to exist in, and no one would ever gain any ground.  And death for them all was surely coming - Smith was the hunger of war, never placated, always feeding, and it would consume them all, machine and human alike.

Any of this sound familiar?  Perhaps it's heavy-handed.  Perhaps it wasn't told in a more efficient manner, but I think THE MATRIX Trilogy was absolutely a parable about the futility of war.  And in 2003, that wasn't exactly the message that we wanted to hear.  Looking at the first film, that may have not been where the Wachowskis were intending to go with this story.  In fact, I think it likely wasn't.  The first MATRIX is a wonderful salad of ideas, thrown about almost as an afterthought, and it was a rich movie because of it.  The Wachowskis had no idea that 9/11 would happen, or the ensuing conflicts afterwards, but once these events happened, I think they shaped the films that came later in a way that is impossible to deny.  And judging from the reaction, I think that people either weren't ready for that message or didn't want to accept it.

When THE MATRIX REVOLUTIONS ends, the war is over, and seemingly the status quo is the same, but with one important difference - humanity, and the machines, are free.  What they do with that freedom, is a choice left up to them. 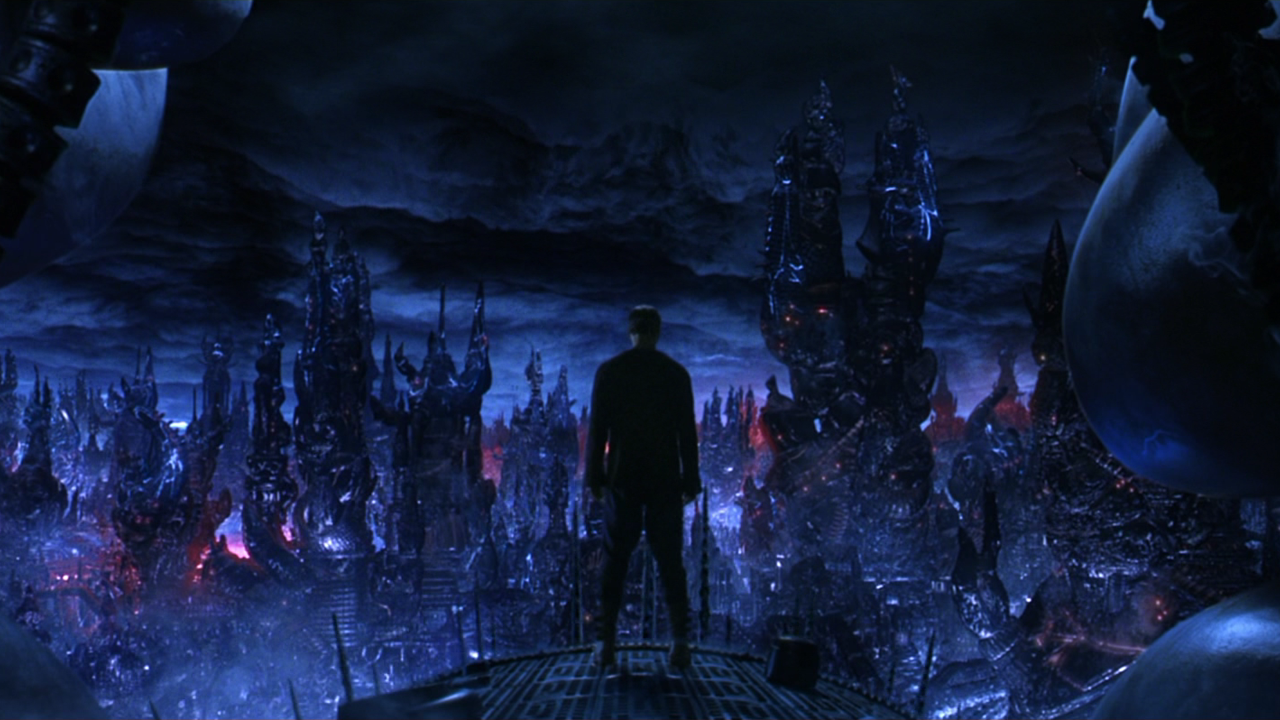 Does that excuse the sloppiness of the sequels?  Not at all.  But I think it does paint some directorial decisions in a new light.  The ideas of faith, love, hope, and the need for people to find common ground, even when it seems an insurmountable gulf - those are ideas too important to be brushed aside because the delivery method may not be completely up to snuff.  I think the Wachowskis wear their hearts on their sleeve, making movies that they feel might actually better our place in this world.  These are noble goals, noble aspirations for any artist, and be it the need for true acceptance, or the love of a great family, or the need to find our connections with each other, the Wachowskis are telling moral stories with conviction and passion.  With these films, BOUND, SPEED RACER, and CLOUD ATLAS, the Wachowskis have assured us all that true art can be messy, earnest, and absolutely essential.