ENTRANCE is a little movie with a powerful punch. It takes a person with patience to get through it all, but the final moments are as terrifying as it gets. Here is my review from May of this year. 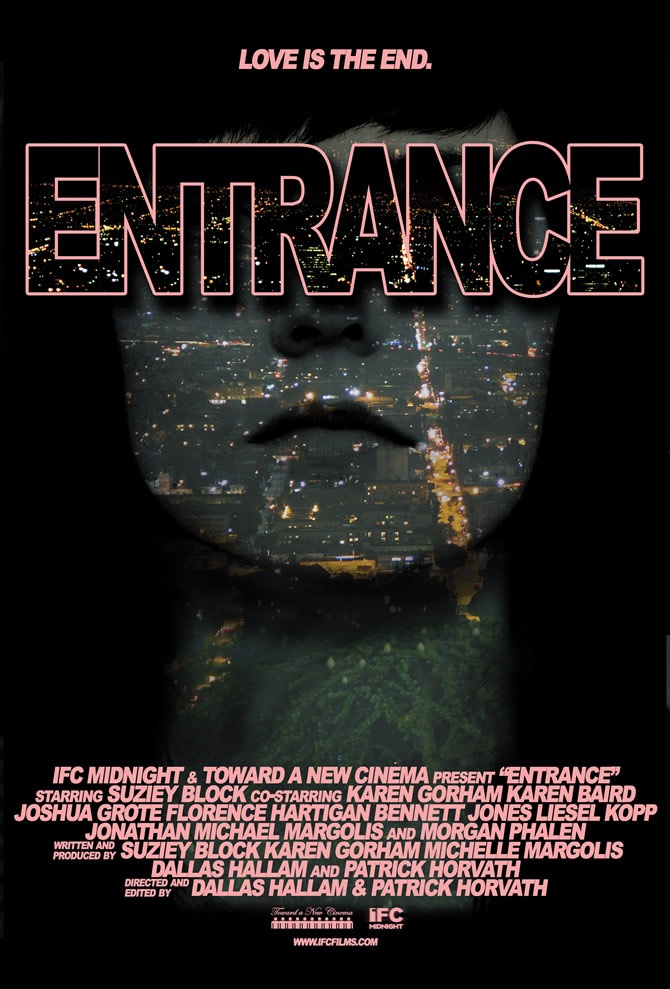 Though it requires a lot of patience, ENTRANCE was one of the most horrifying cinematic experiences I’ve had so far this year. The film follows a young woman named Suzy (played by the adorable Suziey Block) who is ultimately alone in the city. She has a friend who she lives with and only interacts with in passing as they get their morning cup of coffee before heading into work. Her family lives far away. She has a dog who she affectionately loves. But other than random interactions with men in bars, she is alone. ENTRANCE plays with the ultimate fear of being alone and twists it to the most terrifying of lengths.

The directing/writing team of Dallas Hallam and Patrick Horvath convey this message so effectively by following our lead character as she lives her humdrum life working in a coffee shop, listening to music, feeding her dog, going out with girlfriends, and reading books. It may sound like a boring experience, but the almost voyeuristic manner by which the camera follows her conveys an overall sense of unease (that we as the viewer are eavesdropping in on intimate private moments) that I was engrossed with the film waiting for the other shoe to drop. These initial reactions soon fade as the viewer becomes a fellow traveler with Suzy as she is followed home from work by a shady car and then hassled in the street by passing frat boys. We also witness through Suzy’s eyes an uncomfortable failed pick-up attempt in the café where she works between a customer and a fellow employee. In doing so, we are taken in and immediately side with Suzy who is both taken aback by the uncomfortable events surmounting around her, yet uncontrollably drawn to these interactions because she is so much alone. When Suzy’s dog goes missing, her world starts to fall apart and though only hints of something disturbing might be waiting in the periphery, nothing will prepare you for the horrific events that occur the night of Suzy’s going away party after she’s decided she’s had enough with the big city life and wants to move home.

If you are a woman living in a big city, this is a film that will terrify you. As I stated in the above interview, I’ve felt absolute fear when I see women walking alone at night in the city I live in, knowing the dangers that may befall her. ENTRANCE encapsulates this completely terrifying experience by not only putting its heroine in this situation, but validating those fears in the end. Women; watch this with someone you trust. You’ve been warned.

There will be those who will completely disagree with me on this film saying that it bored them to tears. It is a slow builder and apart from a few creepy scenes, I could see folks tuning out at the forty-five minute mark after quietly following this women with very little by way of event or excitement. Those who love splatter and big shockeroos of the SAW and FINAL DESTINATION variety will most definitely not find this film as impactful, but ENTRANCE isn’t about all of that. Those with a little bit of patience and appreciate their terrors slow-slithering will fall in love with this film. ENTRANCE is about creeping paranoia that something is wrong and the utter shock that those paranoid feelings are correct. Most like Polanski’s REPULSION, ENTRANCE allows us to get up close and personal with a lost soul and then punishes us for getting that close in the end.

Be assured, the ending is violent and shocking. I can only compare ENTRANCE to a slowly inflating balloon. As the helium rushes in, you feel the tension growing and know something bad is going to happen. You expect the eventual explosion, but instead of helium, when it does burst, the balloon is full of blood—splattering in your face and shocking the shit out of you. The final moments of this film burrowed into my soul, mainly because the directors so effectively put me in the room with our heroine. Through an unflinching camera, a likable protagonist, an overall sense of dread and paranoia and an ending that hits like an anvil, ENTRANCE is one of the best horror films I’ve seen all year.

Since I mentioned it in the review above, I might as well use it here in my alternative pick for today. Like ENTRANCE, REPULSION highlights the horrors of loneliness and isolation in the city. Polanski amps up the scares in this moody descent into madness tale as his unblinking camera documents Catherine Deneuve fall one step closer to crazy town. A fantastic and terrifying film.

See ya tomorrow, folks, with number 6 of the best of the best covered in AICN HORROR since last year!