NYCC - Mascott Has Plenty Of Chest-Bursting Love For What He Sees Of SEGA's ALIENS: COLONIAL MARINES

While I was at New York Comic Con last week, SEGA invitied me along to check out the latest offering from Gearbox, a game based on a film that has probably influenced the medium about as much as Mario.

The game in question is ALIENS: COLONIAL MARINES, and it was looking pretty damn good. 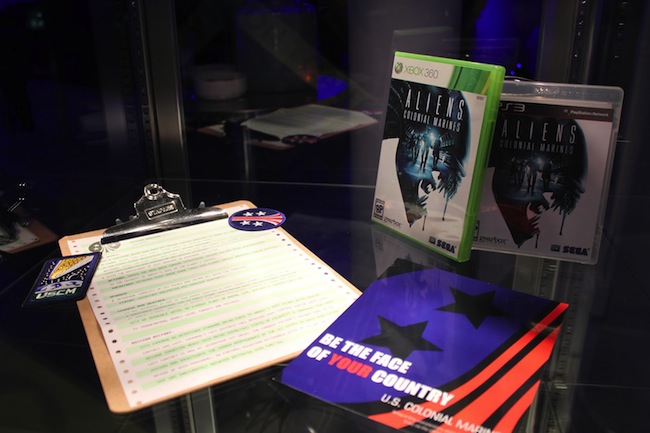 We were directed to a swanky space set up to look like it was run by the Weyland-Yutani Corporation. Xeno facehuggers are kept suspended in jars on tables, and blueprints for the U.S.S. Sulaco, the ship from ALIENS, hang on the wall. There were even specialty ALIENS themed drinks, including the hangover inducing “Chestburster.” (Vodka, soda and Monster energy drink, if you wanted to try bursting a chest or two.)

We were brought upstairs to be shown the main event of the evening, a segment of the single-player portion of the game, something that very few people had been privy to seeing up to that point. We started with a few words from Randy Pitchford, developer Gearbox's CEO and founder. He talked a bit about how much video games owed to ALIENS, and how much they've lifted directly from the film over the years, which is very true. Players of Gearbox's own Half Life expansions might remember borrowed lines like, "They're coming out of the damn walls!"

Next we were introduced to some of the lead staff on the COLONIAL MARINES team. People like Design Director John Mulgore, Creative Lead Brian Martell, and "Chief Creative Champion" Mikey Newman came up to the stage and talked about their roles in the game. Ridley Scott was apparently heavily involved during the game's inception and story development phases, and it was implied that these meeting at this early stage allowed the team to connect the story of COLONIAL MARINES to the story of PROMETHEUS. Lance Henriksen, the original Bishop,was also at the presentation, and talked about reprising the character almost 30 years later.

The game takes place after the events of ALIEN 3, but the specific time frame given is "17 weeks after the events of ALIENS." (Asa nod to "17 days?! We won't last 17 hours!") After Ripley blew up the air processing facility on LV-426 at the end of ALIENS, an entirely battalion of Colonial Marines was dispatched to check out the aftermath, and to determine the cause. While the air processing facility's explosion wiped out the Xenos in and around Hadley's Hope, the eggs in the Space Jockey's ship (from the original ALIEN,) still remained, and hatched. The Colonial Marines are now at war with the Weyland-Yutani  With the player's immediate squad, Gearbox wanted to create the quintessential ALIENS type cast of characters that you're actually able to care about. (The one that's funny, the one that's a jerk, etc.) Of course, with the player's squad being just five or six people, and an entire battalion of 400+ troops sent to investigate, it allows for a lot of disposable "redshirts." 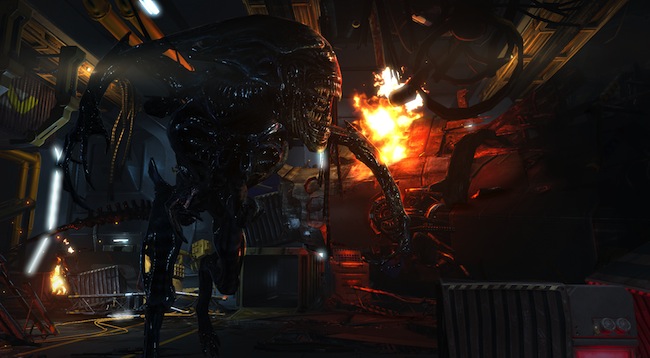 The demo began with Randy and Brian narrating as a Gearbox developer played through it live. The Colonial Marines have crash landed on LV-426 for reasons deemed spoileriffic, and we're dropped into our marine a little ways outside of Hadley's Hope. The environment is the first thing that struck me - the far off, smoldering remains of the air processor, the vaguely unsettling alien geography.

Before too long, they come across the settlement of Hadley’s Hope, which has been ravaged, apparently by the air processor explosion. They begin to plunge the darkened depths of the abandoned settlement, and with the way shadows and light sources are being dynamically rendered, it becomes apparent that this new engine Gearbox has written for COLONIAL MARINES is pulling its weight in a big way. Graphically speaking, the shadows were easily the best looking part of the demo. Not because anything else was necessarily lacking, but because they looked that good.

Inside, the marines find a skeleton they don’t recognize, but one that we most certainly do. They begin searching around the darkened, empty facility. They find a set of turrets that is out of ammo, saying that someone had "one hell of a last stand" there. They start coming across some familiar environments from the movie, most notably the science lab. The attention to detail in that particular room is nothing short of exhaustive. Being that it's where things actually happened in the film, all of the evidence of those events still remains, even down to the shotgun blast on the wall where Hudson shot a facehugger off of Ripley.

The  marines find nothing in the station, and regroup. They begin to set up motion sensors  around the base in order to secure it. There's no on-screen radar in the game, so enemies can sneak up on you if you're not checking your handheld motion sensor, which you actually have to put down your gun to use. It's an interesting trade-off, and despite what it might sound like, it does well to improve the intensity, and gives another  avenue for the game to scare you. The player and a squad mate set up the motion sensors, but just after the last one has gone up, another has malfunctioned, the one we had set up in the morgue. 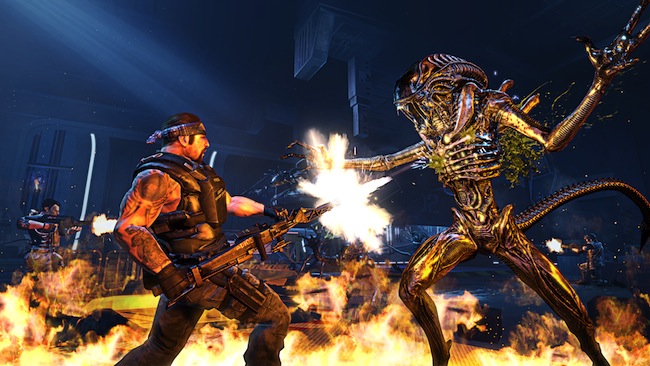 "I think this is a good thing," Randy Pitchford comments, sarcastically.

We go back and fix the sensor, but on our way out, we see a Xeno through a window, and it sees us, letting out an unearthly screech. We get our first taste of combat as Xenos come out of morgue's drawers, through the vents, and everywhere else you could imagine. We fight our way through the station, and this part of the demo segment ends.

We're then sent apparently back one level, where the marines have boarded the Sulaco to investigate what's on board. The ship is in terrible shape, best put by one of the marines as, "Shit's all explodin' and shit!" On board the ship, it becomes obvious that the soundtrack to COLONIAL MARINES has all of the touchstones of a classic horror soundtrack, including the "scare chord." In this level, however, we're not fighting Xenos primarily, but instead battling human enemies.

If you'll remember the end of ALIEN 3, "Michael Bishop" shows up, flanked by soldiers, to ask Ripley to allow them to remove the Queen embryo from her. Those soldiers were from the Weyland-Yutani private military, and considering what happened at the end of ALIEN 3, they're not terribly happy with the marines, making them a second primary adversary to deal with. 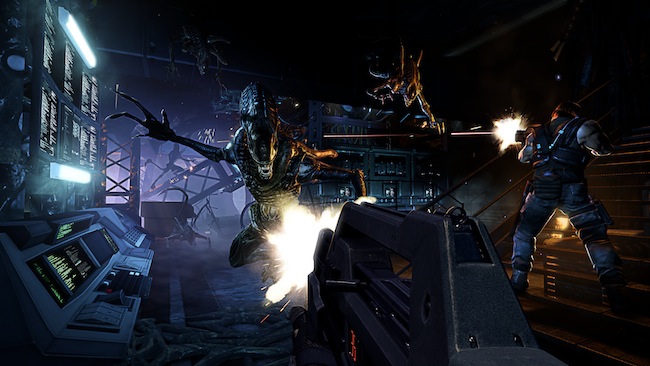 Our squad fights from room to room with these company men, but before long you come across a large storage area where the private soldiers are being torn apart by Xenos. The walkway you're fighting on collapses, dropping us down onto a damp floor with Xenos attacking incessantly. The player is able to hold them off, and creeps under the floor, out of reach of the Xenos. Before long, we came across an area filled with cryosleep containers, and the demo ends.

We were told that, as big fans of cooperative gameplay themselves, Gearbox had decided to make the full campaign 100% playable in co-op with up to four people online or in local split-screen. (Something that matters the world to the people who need it.)

●      Health seems to be handled in that most recent modern trend of non-regenerating armor with segments of regenerating health, not entirely unlike what we’ve seen in games like HALO: REACH.

●      There are collectible items that explain some of the game’s back story. Audio logs in Hadley’s Hope and dog tags of fallen marines were two that we saw.

●      Lance Henriksen voices two characters in the game: Bishop and Michael Weyland. His leg from ALIENS also apparently shows up.

●      More familiar characters from the films, including Hicks, will be making appearances, and not just as multiplayer skins.

●      The COLONIAL MARINES team included noted designer Syd Mead, who did the original designs for ALIENS. For the game, he apparently finished the blueprints for the Sulaco, a ship he had only designed in part for the movie.

We were then brought downstairs to try out the multiplayer portion of the game, told that we would be the first people outside of Gearbox to play as the Xeno team. Multiplayer has been a huge part of the ALIEN and PREDATOR games going all the way back to 1994, (The best game on the Atari Jaguar!) and this entry is no slouch. Multiplayer puts a team of Xenos against a team of marines. While the marines play a first person shooter, the Xeno team players the game in third person, with the ability to climb on walls, through vents, and to lunge great distances. 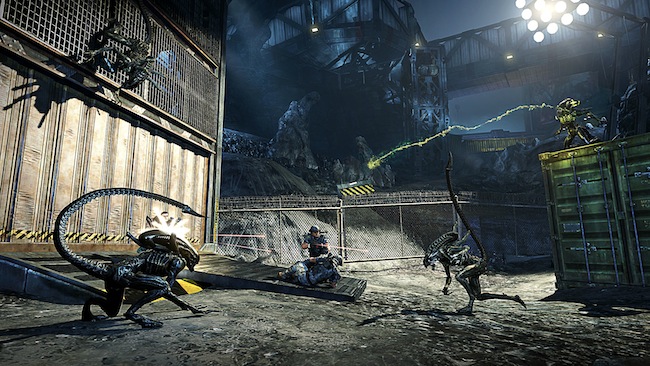 It became apparent, during the first few matches I played with this large group of games journalists, that COLONIAL MARINES multiplayer was unlike anything else. The best comparison would be to LEFT 4 DEAD's versus mode, but even that trades off the tension of team deathmatch for a different kind of play. The Xenos were able to pick apart squads that weren't working together, and slaughtered them for the first 20 minutes or so. But before too long, the payers started to understand just how the marines were supposed to be played. They stuck together. They watched their motion sensors. They looked at the ceilings. Once the marines started working together, they won a match. And then another.

It's obviously a very balanced game, which I can always respect greatly. If the Xenos work together to scare the players that are marines, and the marines work together to watch each other's backs and communicate, it's a really fun multiplayer component.

There's also "Escape Mode." The marines are tasked with finishing certain objectives throughout the level. The Xeno team works to prevent them from being able to complete those tasks by killing them. It was another neat addition to the MP component of the game.

For those who want to know these sorts of things, the game was running on high-end PCs, while we were using Xbox 360 controllers plugged into USB ports.

We were told that the game had gone "content-complete" just a short while before, and Gearbox was now working on polishing what they had, and making sure it all works well to create a coherent experience. Can it live up to great licensed games like CHRONICLES OF RIDDICK: ESCAPE FROM BUTCHER BAY? Maybe, but at the very least, it'll certainly be one to watch out for when it releases on February 12th, 2013.