While I’m fully aware that suggesting a low budget horror throwback at this point in the column is going to raise the ire of those who think KILL LIST, INNKEEPERS, and whatever else personal favorite one might have is the best of the year, but as I’ve explained in the above paragraphs, this is, in my opinion, my list of favorites covered this year. And though it is low budget, there is something so awesome about BLOOD JUNKIE, a faux-retro slasher film about a killer who hunts down some mulletted party dudes and some skanky hairspray gals that is more fun than most horror released in the mainstream. 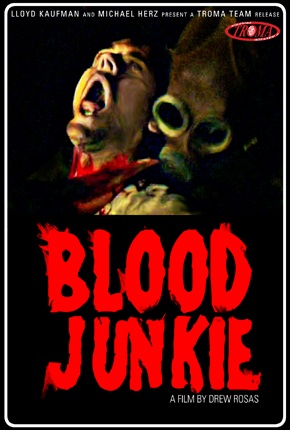 It took quite a while before I realized that BLOOD JUNKIE was a modern film made to look like an 80’s slasher film rather than one just filmed in the 80’s. Right from the opening sequence I wondered if this was untalented folks making a bad film or if it was talented folks going out of their way to make a good film that looks like a bad film. Turns out it is the latter. 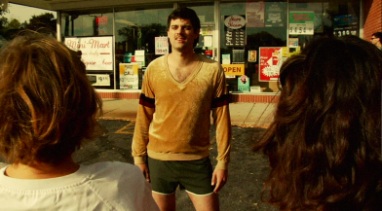 I had a blast with this film. From the over the top soon to be victims who high five, guzzle cheap beer, and shout “Chicks!” to every camera cliché and trick in the book used, this is a love letter to bad 80’s horror for anyone who lived through and loved that era of horror films. The set up is paper thin. Two guys meet two girls in the parking lot of a liquor store. The girls have money for booze. The guys have the car. They get together and go camping. Of course, there’s a blood sucking killer in the woods as well. This film looks like it was filmed for about 12 dollars, but the filmmakers use this to their advantage, amping up the cheese and wallowing like a pig in shit in every low fi trick in the book. 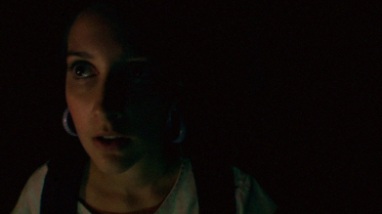 If you’re a fan of A WET HOT AMERICAN SUMMER and lines like this
“This chick will melt like a stick of butter in the palm of my tongue.”
make you laugh, then this is the film for you. The film is surprisingly effective in the chills department once the blood starts flowing and in between it will have you laughing your ass off at how ridiculous the culture of the 80’s really was. Plus, unlike a lot of Troma films, the narrative doesn’t fall apart in the end. From start to finish this is a low, passionate, sloppy hug around all things 80’s horror. I’m addicted to BLOOD JUNKIE and will eagerly anticipate what director Drew Rosas has in store in future efforts.

Another offbeat gem of a horror film that deserves to be seen by more people is LUTHER THE GEEK, about a metal toothed serial killer who clucks like a chicken. Its simply has to be seen to be believed and really delivers on both weirdness and scares, plus it’s the first role the gorgeous Stacy Haduik ever played and boy, does she make an impact in this one! Here’s my review from last November.

See ya tomorrow, folks, with number 13 of the best of the best covered in AICN HORROR since last year!