Yes, the PARANORMAL ACTIVITY relies on cheap scares and a formula which by this time is well worn, but it gets me every time and I wouldn’t be honest if I didn’t include last year’s installment in the countdown of the best since last October. Below is my review of the film I wrote when I saw a premiere of it in October. 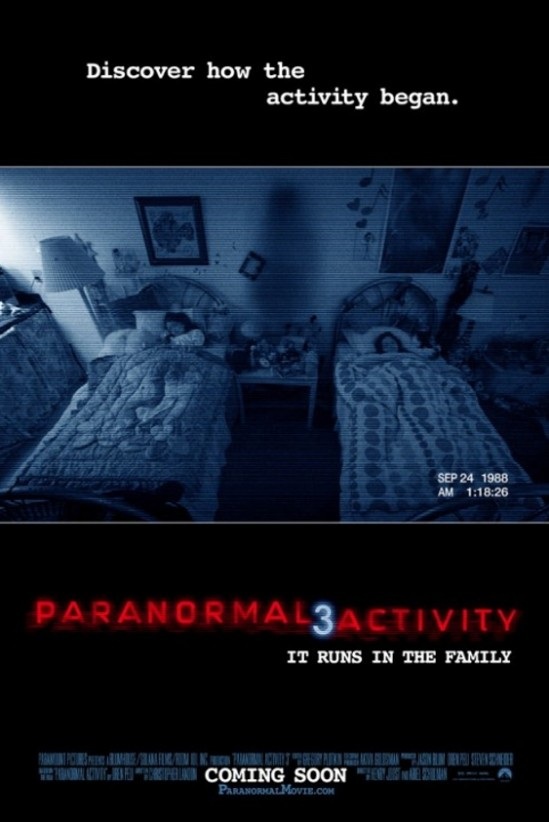 After the credits for PARANORMAL ACTIVITY 3 rolled I turned to AICN Chicago Editor Capone and said, “It always gets me”--it being the PARANORMAL ACTIVITY films. Yes, there are those who loathe the films for being repetitious and exercises in patience. Yes, most of the endings of the film series are somewhat lackluster. But I’ll be damned if I don’t jump almost out of my theater seat every time I watch the films. Having seen every PARANORMAL ACTIVITY in theaters, I have to say this is a film definitely best viewed with an audience. The wave of utter dread and silence (a feat worth note for theaters these days) that sweeps over the crowd every time night falls and the rolling camera scenes begins is something that makes the experience somewhat fulfilling. Sitting in a crowded theater, I thought my experience watching PARANORMAL ACTIVITY 3 would be hell with rowdy and obnoxious idiots ruining all sense of tension and anticipation. But it’s a testament to the film that every time the lights went out in the film, you could have heard a pin drop. 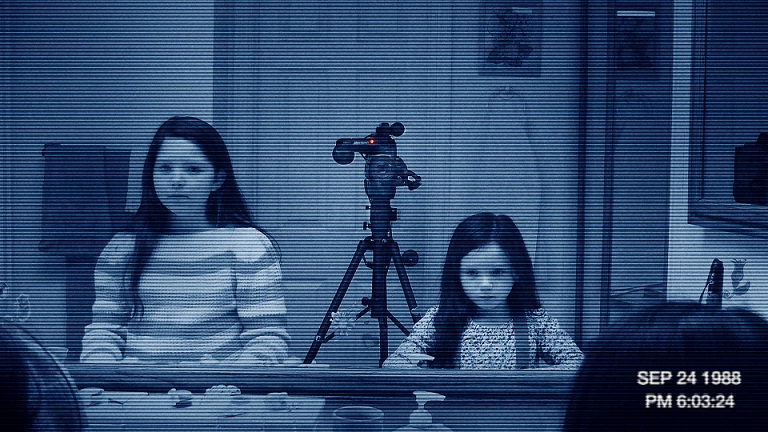 By now, everyone knows the structure of PARANORMAL ACTIVITY. Set up a bunch of cameras. Have them film the stars while they are sleeping. Silence. Time passes. Then some scary shit happens. Wash, rinse, repeat for three films now. PARANORMAL ACTIVITY 3 continues this trend by having a concerned step dad set up three cameras around the house to capture strange things on camera after seeing something they cannot explain on film occur after an earthquake. Having seen the previous films, we know it’s a demon/ghost thingee haunting this family. The narrative leaps back in time 18 years to follow Katie and Kristi as children. Throughout the first two films, both Katie and Kristi refer back to their youth as either something they blocked out or something they fear. Here we see where the nightmares began.

Though repetitious, PA3 introduces some interesting elements to the mix. One, the film elaborates on the theme of witchcraft that was only touched upon in the first two. This opens a new door for the series to travel through for the inevitable sequel (most likely to be released next year). Also, filmmakers Ariel Schulman & Henry Joost (who delivered another caught on video thrill ride with CATFISH last year), make some smart technical decisions placing a camera on a rotating fan which pans back and forth across the room, setting up for some absolutely terrifying sequences and adding a bit of motion to the static cams and steadiness to the shaky hand helds relied on in the first two. It’s this type of ingenuity that keeps this series interesting as it proceeds from one film to the next. Finally, though I hate false jump scares, the filmmakers set up one false scare that is absolutely pants-shittingly good. It’s hilarious and expertly put together. 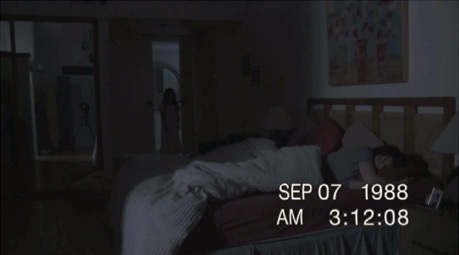 PARANORMAL ACTIVITY 3 is more of the same. This could mean more stuff that annoys you if the first two films got on your last nerve. But for me, I found it to be another fun installment in a series that continues to provides real scares and shocks that keep me on the edge of my seat from start to finish. Though most franchises like SAW seem to fall off the cliff into a big lake of ridiculousness trying to justify the need for a sequel, at least PARANORMAL ACTIVITY seems to have a narrative mapped out and a formula that continues to work. For a horror fan who loves being scared PARANORMAL ACTIVITY gets me every time and got me again this year.

Though fans of modern horror might now bat an eye to THE HAUNTING, it is a damn fine film, filled with what were state of the art special effects at the time and fantastic performances by a cast forced to stay the night in a haunted house. Pairing this with any PARANORMAL ACTIVITY movie might be blasphemy to film scholars, but it’s an interesting pair to hold side by side regarding the haunted house genre. While our modern fascination with found footage may be overwhelming, it’s good to know a creepy haunted house will always be prime ground for good horror.

See ya tomorrow, folks, with number 16 of the best of the best covered in AICN HORROR since last year!