The Behind the Scenes Pic of the Day is becoming something that never existed before. It’s becoming… Brundlefly.

Ah, Cronenberg’s The Fly, how I love thee. It’s hard for me to rank my Cronenberg films, actually… He has kept a very recognizable voice throughout all of his films despite them each being significantly different from each other. The Dead Zone, for instance, is about the most rewatchable thing he’s ever done, but The Fly is so perfect and iconic and sad/fun that I don’t know if I could ever rank any of his other work above it. Yet it’s The Brood that jumps immediately to mind when I think the name “David Cronenberg.”

There’s very few filmmakers with that complex effect on the geek brain and for that, Cronenberg should be commended.

Today we are looking at The Fly, as make up artist Stephan Dupuis puts the finishing touches on Jeff Goldblum’s later stage Brundlefly appearance.

Thanks to William Forsche and the Practical Effects Group for the image! Click to (slightly) enlargen! 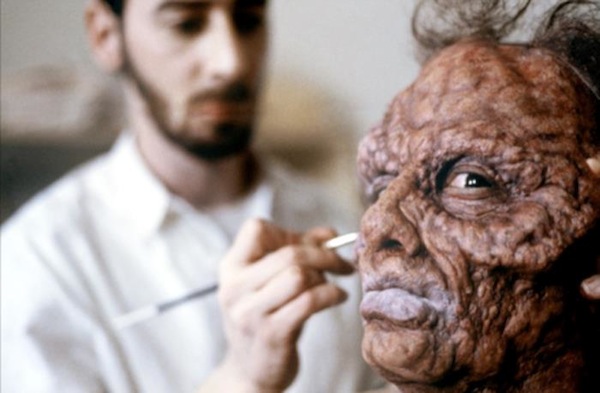 Tomorrow’s pic has his father’s eyes.