John Ary here with another installment of Ain’t It Scary Reviews.  Today a private eye takes on a master of the dark arts with a horror mystery set in the 90s.

Clive Barker attempts to marry film noir with his own unique brand of demonic horror.  The result starts off as a promising mystery full of dark witchcraft and spells, but slows down into a plodding action film as Scott Bakula takes on The Lord of Illusions.

While on a routine insurance fraud case in L.A., supernatural detective Harry D’Amour gets sidetracked when stumbles upon the murder of a fortune teller.  The killing is somehow connected to a world-renowned magician that maybe using actual magic to power his illusions.  Through his investigation D’Amour unweaves a murderous plot that could mean the end of the world. 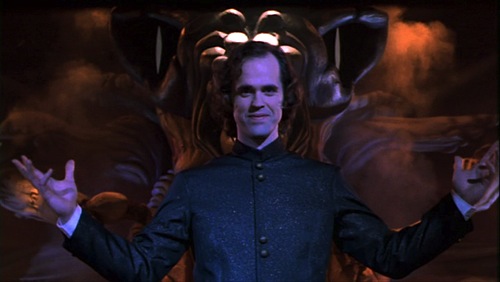 The movie starts off very strong with an opening sequence that incorporates some excellent special effects, a creepy atmosphere and the basis for an interesting bad guy.  The main problem is the story’s structure.  There isn’t much mystery in this mystery.  We pretty much have everything figured out by the end of the second act.  When we get to the big climax there aren’t any interesting surprises left.  By then it becomes an excuse to show off more special effects shots, most of which are a rehash of effects we saw from earlier in the movie.  It devolves, moving away from its film noir/horror setup into a boring action movie with Scott Bakula constantly getting thrown around by the main bad guy and his henchman.  It goes from pretty cool to pretty boring over the course of its 120 minute run. 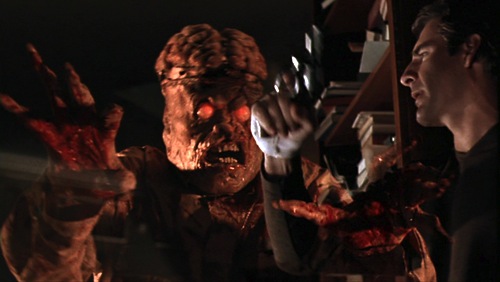 Visually, it’s a nice time capsule from the mid-90’s.  The special effects probably looked fantastic for the time period, but now, especially watching it in HD, they look a bit archaic.  One thing you can usually count on with Clive Barker is great make-up work.  He delivers here with an excellent character design that is disgusting and fascinating to look at all at the same time.  Maybe the most distracting thing in the movie is Scott Bakula’s clothing choices.  Was the costume director colorblind or is that how suave detectives dressed back then?

The characters were a mixed bag.  I’m a Scott Bakula fan.  When he’s playing a nice guy like on Quantum Leap or Necessary Roughness, he comes off a sincere and empathetic.  Unfortunately the dark tone of the film doesn’t really suit him.  He just doesn’t feel right as a hard-boiled detective who has literally seen hell personified.  On the other hand, Barry Del Sherman perfectly sets the tone with every scene he appears in.  As Butterfield the henchman, he’s vile, shrewd and dangerous... the kind of bad guy you appreciate. 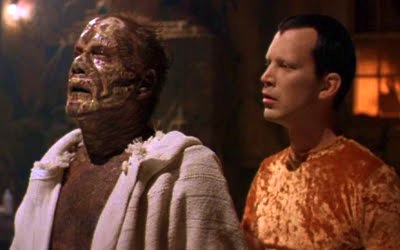 Lord of Illusions does a few things right, but it loses its way by trying to walk the line between detective pulp and supernatural horror.  In the end, it does neither particularly well.  At least Clive Barker brings a few of his signatures along for the ride... a devilish bad guy, plenty of gore and the feeling that at any time an important character (other than Scott Bakula) could die in an vile awful way.

Check back in tomorrow for another Ain’t It Scary Review as a bunch of stereotypical high school kids from the 80’s spend a night in a haunted mortuary. 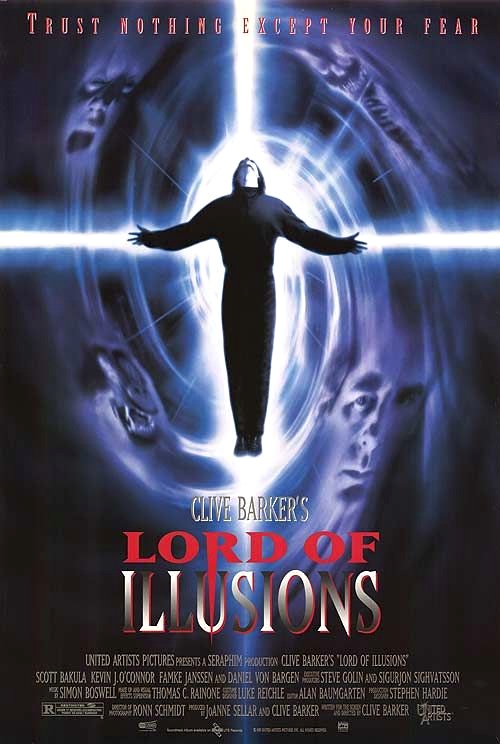